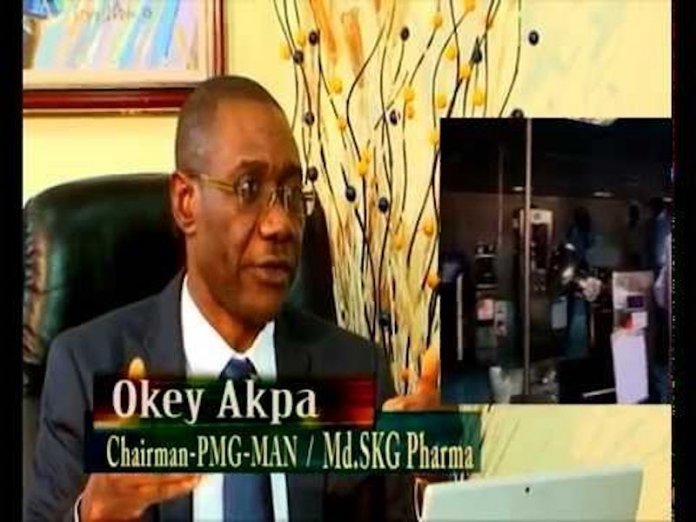 Hamid Ayodeji
The Managing Director of SKG Pharma Limited, Dr. Okey Akpa, has called on the federal government through the Central Bank of Nigeria, to set up a N300 billion Pharmaceutical Expansion and Export Fund.

The fund is expected to provide soft loans to upgrade, improve factories and increase capacity among indigenous drug manufacturing companies.
In addition, he stressed that it was not in the interest of national security for Nigeria to depend largely on imported drugs for the healthcare needs of a population of over 180 million people.

He, therefore, called on the federal government and other tiers of government to adopt and implement the concept of Medicines Security, a strategic document developed by the Pharmaceutical Manufacturers’ Group of the Manufacturers Association of Nigeria (PMG -MAN) to ensure that the pharmaceutical industry in Nigeria is encouraged through policy and political will, to produce adequate, quality and affordable drugs locally for the health needs of the Nigeria.

A statement quoted Akpa to have said this in Lagos, while receiving the President of the Manufacturers’ Association of Nigeria (MAN), Engr. Mansur Ahmed and his team in his office, said the concept on Medicine Security was based on the National Drug Policy 2005 as amended which stipulates among other things that 70 per cent of the drugs consumed in the country should be produced locally, while 30 per cent is exported.

The SKG pharma boss who is the chairman of West African Pharmaceutical Manufacturers’ Association and immediate past chairman of PMG-MAN said local production which now stands at 35 per cent was not a reflection of the skills and capacity of local industries, but would need government intervention in several areas to boost the capacity of local pharmaceutical companies.

While thanking the current administration for the Presidential Order 003, which is a policy that makes it mandatory for Ministries, Departments and Agencies(MDAs) of government to patronise locally made goods including drugs, he called on the federal government to adopt a system of “smart protection” for the pharmaceutical industries which involves giving incentives in the areas where the indigenous drug manufacturers has acquired capacity and also prevent the dumping of sub-standard and fake foreign drugs in the country.
In his response, Ahmed acknowledged challenges facing manufacturers and the difficult environment they operate.

He said the association was engaging the government to ensure that there is support along the pharmaceutical value chain. Ahmed, said with the coming of the African Continental Free Trade Agreement which Nigeria was yet to sign, the pharmaceutical industry would be impacted greatly either positively or negatively and called on the industry to upgrade in terms of technology and capacity to be able to compete with pharmaceutical companies from other African countries.