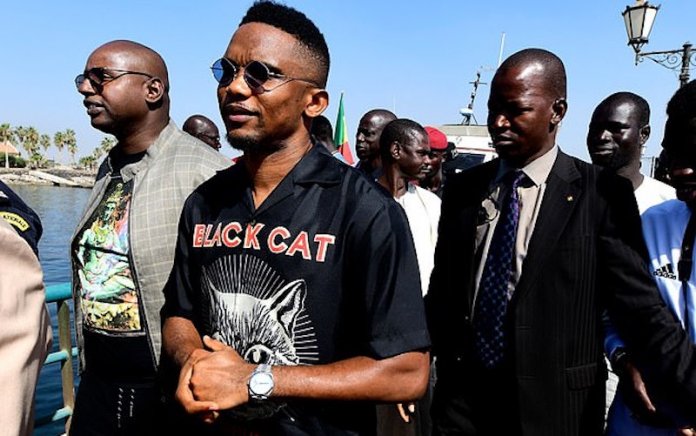 Adileusa do Rosario Neves, 39, is fighting to have the ex-Chelsea and Evertonstriker recognised as the father of her 19-year-old daughter, Erika.

Adileusa’s lawyer Fernando Osuna confirmed on Tuesday that the hearing would take place at a Madrid court on April 24.

The lawsuit presented by Cape Verde-born Adileusa says she fell pregnant after meeting Eto’o – now playing for Qatar SC – in a nightclub in the Spanish capital in 1997 when he was at Leganes on loan from Real Madrid.

She claims Eto’o, 37, who has six recognised children with four different woman including his wife Georgette, told her he would ‘act responsibly’ soon after she broke the news but then cut off all contact with her.

Erika was born in November 1999 in a hospital in the Spanish capital.

It was not immediately clear on Tuesday if the Cameroon-born footballer has agreed to a voluntary DNA test.

Adileusa’s lawyer Fernando Osuna, who has been fighting to get veteran crooner Julio Iglesias to admit he is the father of a 40-year-old Spaniard, said when he launched his court fight against Eto’o that he would ask for a DNA sample.

Osuna said the court would decide after the hearing whether it agreed to Erika’s request for a maintenance allowance as an interim measure while it continues to study the paternity claim.

He said: ‘Samuel Eto’o has been summoned to the hearing and it will be open to the press and public.

‘It’s not yet clear if he will attend as he is abroad. He has been asked to attend by a legal representative he had when he was living in Majorca.

‘The judge has allowed official communications to be sent to that person because it would have been impossible otherwise for the court to notify him.

‘He has not so far agreed to a voluntary DNA test and I doubt at this stage that he will.

‘At the moment our case is based on things like photographs and affidavits from witnesses but a refusal by Eto’o to agree to a voluntary DNA test would go in our favour.

‘This process is a long one and it’s going to go on after April’s hearing, but the decision on a maintenance allowance is a key part of this process and the judge’s decision cannot be appealed.

‘The paternity claim would continue after the hearing next month.’

Several photographs of Adileusa with the player, who spent nearly two seasons in the English Premier League before agreeing a three-year deal with Russian club Anzhi that made him the world’s highest paid player, are understood to have been submitted as part of the paternity lawsuit.

Several witnesses are also believed to have signed affidavits confirming the pair were dating at the time.

Adileusa, known to friends as Dee Dee, attacked Eto’o in an interview late last year after she announced she was taking legal action.

Recalling the footballer’s response when she revealed to him she was pregnant, she said: ‘He told me I was like all the whores who go looking for footballers, that I was a bitch and if I didn’t have an abortion I was going to have problems.