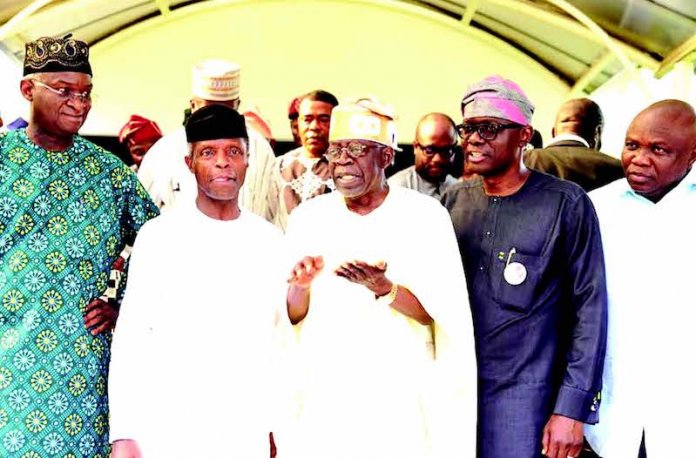 The meeting was sequel to the formal inauguration of Free Lagos Orange Movement, a similitude of political campaign that sunk the re-election of the Senate President, Dr. Bukola Saraki during the just concluded National Assembly election.

At the meeting, THISDAY findings revealed that effort was directed at resolving disagreement between Ambode and Sanwo-Olu and make work towards achieving victory at the forthcoming governorship and House of Assembly elections in the state.

Findings, also, revealed that the meeting frowned at some members of the APC accusing Ambode of funding the governorship candidate of Peoples Democratic Party (PDP) in the state, Mr. Jimi Agbaje and working with the agents of the PDP presidential candidate, Alhaji Atiku Abubakar.

THISDAY learnt that the meeting commended Ambode for accepting the outcome of the October 2, 2018 governorship primaries and spearheading the campaign of the APC candidate until the aggrieved governors in other states of the federation.

In a statement by his Chief Press Secretary, Mr. habit Aruna yesterday, Ambode yesterday denied allegation that he was working with the agents of the PDP presidential candidate in the just concluded presidential election.

Ambode noted that he was busy working for the election of the governorship candidate of All Progressives Congress (APC) in Lagos State, Mr. Babajide Sanwo-Olu contrary to some reports in a section of the media.

He said that having publicly declared his acceptance of the decision of the party on the party’s governorship primaries, he would never take any action to undermine the prospects of the party in the ongoing elections.

The statement reads, “The attention of the Lagos State Governor, Mr. Akinwunmi Ambode, has been drawn to a report in the March 1 edition of The Nation.

“Specifically, the contentious report published on the newspaper’s front page without any by-line, insinuated that Ambode might be working with an opposition party through former Commissioner for Energy & Mineral Resources, Mr. Wale Oluwo.

“The report also attempted to hold the responsible for the alleged activities of Senator Tokunbo Afikuyomi because he supported the governor’s gubernatorial ambition during the primaries of the APC in October 2018.

“The governor wishes to make it abundantly clear that, having declared publicly his acceptance of the decision of the party on the primaries, he has not and will never take any action to undermine the prospects of the party in the on-going elections.

“It is human to aspire and the capacity of each individual to manage the negative outcomes of a legitimate aspiration differs. But that should never be the basis to link His Excellency to whatever action of certain individuals who might have shared his vision in the past but have proceeded to pursue their own interests as adults and citizens without any influence from or recourse to the governor.

“Ambode’s decision to stand by the party that has given him the platform to serve Lagosians meritoriously is based on the principle of justice, responsibility and loyalty.

“He has everything to gain from the victory of the party’s candidate Mr. Babajide Sanwo-Olu as the Governor of Lagos State on March 9. He looks forward to handing over the affairs of the state to the candidate of the APC come May 29.

“It is therefore disturbing, unfair and sad that a respected medium such as The Nation, which enjoys the goodwill of members of our party and is appropriately positioned to verify the falsehood of these fictitious and sponsored hatchet job chose not to observe the journalistic dictum of “if in doubt, leave out in the breach.

“In this circumstance, His Excellency hereby makes use of his right to a rejoinder and demands an apology for the unjustifiable aspersions cast on his person by wrongly presenting him to right thinking members of the public as a disloyal saboteur trying to frustrate his party’s campaign and electoral victory. Nothing can be further from the truth.

“Ambode has consistently appealed to those who sympathise with him that the best way to express solidarity is to vote for the candidates of the All Progressives Congress on Saturday March 9, 2019 in order to ensure that his own legacy is preserved and the gains of the past four years are improved upon.

“As we move towards next Saturday’s important election, Ambode urges Lagosians and party faithful not to allow fifth columnists pretending to be overzealous crusaders frustrate our onerous efforts to take Lagos State to the next level.

“The governor says as he did in the run-up to last Saturday’s presidential poll, he will leave no stone unturned and spare no effort in ensuring that the party’s flag-bearer in the governorship election, Mr. Sanwo-Olu and all the 40 APC candidates in the House of Assembly poll are duly elected on Saturday March 9.”