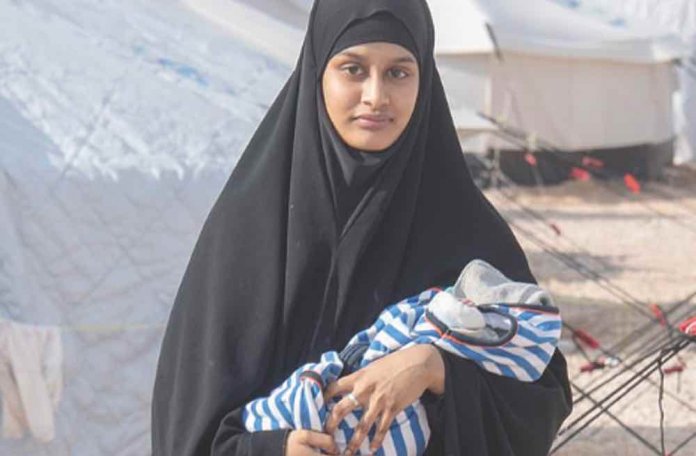 Shamima Begum, the British schoolgirl who left home at 15 in 2015 and fled to Syria to join ISIS, has begged for forgiveness in a recent interview and asked to be allowed to return to Britain so she can inspire girls like her not to make the same mistake she made.

Shamima, now 19, gave birth to her third child, a boy, last weekend while her husband, an Islamic fighter, is in jail. Cradling her one week old son, Shamima invited her interviewer into her tent. She now has a tent due to her recent fame.

The camp where Shamima is, is the Al-Hawl refugee camp. She is in the ‘Daeshi’ section of the camp where displaced jihadi wives are. Daesh is the Arabic term used by its detractors to describe IS.

Most of the displaced Jihadi wives, whose husbands are either in prison or dead, are still very loyal to their men and the brutal Islamic State Ideology. Some of them have even attacked people trying to help them. Among them are as many as a dozen Britons, but most are going to painstaking lengths not to be identified.

Shamima says she is scared and her life is in danger because the other Jihadi wives hate her for her recent ‘fame’, which had angered a lot of the other jihadi wives in the camp.

Shamima says: “Now a lot of women hate me, I’m afraid of a lot of people.”

Shamima’s recent interviews in which she exposed her face on TV have angered the more hardline IS women in the camp. There has been talk of her tent being burned down.

Shamima’s newborn son has been named Jerah, after a 7th century Islamic warlord. At just 19, she has given birth three times and lost two of the children. Her toddler daughter died a few weeks ago and she lost her other son at eight-months-old last year. Her husband is in jail.

Speaking to her interviewer from her tent, Shamima begs to be allowed to return home.

She says: “I am hoping to be given a second chance. I’d like to be an example of how someone can change. I want to help, encourage other young British people to think before they make life- changing decisions like this and not to make the same mistake as me. I can’t do that if I am sitting here in a camp. I can’t do that for you.”

Shamima insists she’s a victim in all of this, rather than someone who chose to leave her home and join a terror group.

She also questions why scores of other jihadi wives and their children have been allowed back to the UK after travelling to Syria to join IS while the UK government is using her as a scapegoat.

She says of the decision to strip her of her UK citizenship: “I feel like I’ve been discriminated against because everyone was saying I was a poster girl for ISIS. I’m being made an example of. I’m being punished right now because I’m famous.”

Shamima complains of the hard life in the camp. She says she is sick from the cold. She is fortunate to have a tent but there is no oil burning stove for cooking. She says she is ‘stressed’ from the lack of sleep as she nurses her son.

Opening up about what life was like under IS, Shamima revealed that she handed over her British passport willingly when she arrived in Syria with two school friends in February 2015.

She says: “They took my passport but I thought to myself ‘‘what am I going to do with it? I don’t really have any use for it’’.

She says she never expected to go back. The future she wanted was as a housewife in the caliphate. She made it known on arrival that she would like to marry an English-speaking fighter aged between 20 and 25 years old. Ten days after arriving in Raqqa, Shamima was taken to a room to meet Yago Riedijk, a 23-year-old Dutch convert to Islam. Shamima says Riedijk, who changed his name to Abu Zoraya was just her type.

When I first saw him, I was like ‘‘OK, yeah, he is good looking.’’ She says this while giggling like a giddy teenager. She even had a piece of paper in her pocket with a list of questions for him.

She continues: “I took out the paper, that’s what women do, you have to ask your questions. He was straight up and he was truthful with me.”

Her first question was: What do you expect from me?

She says: “He told me that he was strict and he wanted a good housewife that stays inside. He didn’t want someone who is Westernised and wants to always go out and stuff.”

Her next question for him was: Are you a fighter? He said he was injured still and he was still recovering but he was planning to go fight again soon.

A few more questions after, Shamima agreed to marry him. She says: “I said yes, and he said yes.”

But she soon found out that life with the terrorist group was far from normal.

She says: “I went to ISIS thinking I would have a normal life but it turned out not to be true. I just got tricked, I guess.”

But Shamima is still in love with her husband and hopes to be reunited with him someday. She insists she’s still a married woman. Though Riedijk is a convicted terrorist who police believe was part of a cell plotting an atrocity in Europe, Shamima hopes for a future with him.

She says: “I hope for him to see his only surviving child. He loved his children a lot; when I lost them I think it had a bigger effect on him than me. If he does get sent back to his own country, he will do his time there in his own country… (I will) wait for him. I am still married to him.”

While discussing Home Secretary of the Unite Kingdom Sajid Javid’s suggestion that he might consider IS children being brought back without their mothers, Shamima burst into tears, saying: “How can you ask a mother to separate herself from her son, especially after everything I have lost? This boy is all I have.”

When asked what she misses most about Britain, she says, “the feeling of being safe and secure, not having planes flying over me, not having to randomly move in the middle of the night”.

For now Shamima and her son will have to remain in their tent until their fate is decided by the British government. She shares the tent with Dura Ahmed, 28, a Canadian mother who tries to appease her crying baby with a chocolate biscuit.