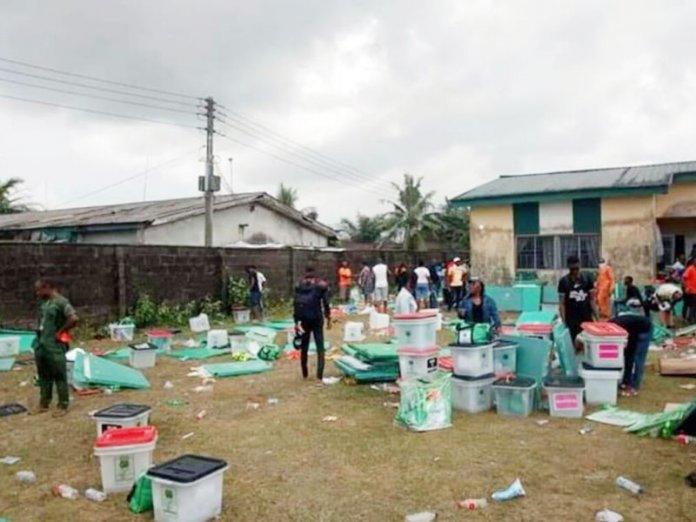 Samuel Ajayi examines reports of violence during the February 23 presidential and parliamentary elections and the claims that these occurred in so-called strongholds of the Peoples Democratic Party, PDP

When President Muhammadu Buhari gave his shoot-at-sight order against ballot box snatchers, he drew a lot of opprobrium from Nigerians who felt such a pronouncement should not have come from the nation’s number one citizen. However, there were those who felt the President was in order as the declaration would scare away mischief-makers during elections.

The February 23 presidential and parliamentary elections were largely held across the nation but not without incidents as ballot boxes were snatched, ballot papers burnt and even some voters attacked with some people reportedly killed.

In Ago Palace Way, a popular area in Lagos State, which is believed to be a PDP stronghold, voters were arriving at polling stations in the area when hoodlums struck and chased them away, destroying electoral materials, especially ballot papers.

According to reports, no voting took place in the area as the hoodlums ensured that electoral officials could not set up and start the process of voting.

Evelyn Emesim, a resident of the area, wrote on her Facebook page that hoodlums destroyed voting materials in some areas and burnt them in other areas.

“Area boys have refused people voting in Ago Palace Way , Okota, Lagos. They are using all sorts of weapons to drive people away from the polling centres shouting ‘leave Lagos, leave Lagos. They burnt the voting materials in some areas,” Emesim wrote in a live update.

In Surulere, another area in Lagos, suspected APC thugs invaded polling centres and chased would-voters away. There were unconfirmed reports of other areas where people were asked who they intended to vote for before they could be allowed to cast their vote at designated polling units.

According to a report in PUNCH newspaper, accreditation and voting were ongoing when hoodlums armed with guns emerged from nowhere and started shooting into the air to scare away voters. In the process, three people were killed on the spot while another one died in the hospital. Policemen and other security operatives that were at the polling units where the shooting took place allegedly took to their heels.

However, the hoodlums were unable to snatch the ballot boxes as soldiers who were monitoring the polls thwarted their efforts.

In Akokotoro and Bonny local government areas of Rivers State, voting could not take place as heavy gunfire rent the air as would-voters were on the queue to be accredited in order to cast their votes.
The INEC Commissioner and head of the Commission’s Voter Education and Information Committee, said in a statement that the commission would reschedule elections where there were reports of violence since no election had taken place in the areas.

“We received reports of violence and ballot box snatching which took place in Akokotoro and Bonny Local Government area of Rivers State and some parts of Lagos and Anambra States. We are waiting for reports and we have told the Resident Electoral Commissioners in the states to submit reports. So long as polls didn’t commence before the violence, it is assumed that there was no voting,” Okoye stated.

While INEC prepares to review reports of these disturbances, concerns are being raised by the PDP and political observers who claimed the violence was perpetrated in PDP strongholds, arguing that the Ago Palace Way in Lagos is mainly populated by Igbo who are perceived to have sympathy for the PDP presidential candidate, Alhaji Atiku Abubakar.

In the same vein, the area where three people were killed in Delta State was considered another stronghold of the PDP. This has raised suspicions that perhaps, these acts of violence did not take place by happenstance but was carefully planned to disenfranchise those they believed might want to vote for the PDP.

In a related development, the Eastern Peoples Forum (EPF) has condemned in its entirety reported cases of intimidation and alienation of Igbo voters in Lagos and Kano during the February 23, Presidential and National Assembly Elections.

The National Coordinator of the group, Elder Ken Emechebe, in a statement yesterday said that these seemingly patterned incidents from were intended to spark tension, and force registered Igbo voters to lose interest in the voting exercise and abandon their voting responsibilities and polling units.

He stated: “We condemn in its entirety reported cases of intimidation and alienation of Igbo voters in Lagos and Kano during the February 23, Presidential and National Assembly Elections.

“Following reports that hoodlums set ablaze thumb-printed ballot papers at Ohafia Street, Ago Palace Way in Isolo Local Government Area of Lagos, and denial of Igbo voters access to cast their votes at polling units in Sabon Gari Area of Kano, we call on the INEC; International Observers; and security agencies in the country to take note of these anomalies which do not in any way reflect the free, fair and credible elections INEC had promised.”

The group noted that it expected the INEC and security agencies to have made adequate arrangements for security of voters and voting materials across the country during such national elections.

Emechebe added, “Thugs’ invasion of polling units, carting away of electoral materials and setting ablaze of thumb-printed ballot sheets should not be happening at an election that INEC stated it was ready to conduct creditably.”
The group therefore called on the electoral body to rectify these anomalies and fix date for elections to be re-conducted at these affected places and any other places where such anomalies happened.

It also called on INEC to ensure that adequate security are put in place to ensure that thugs and lackeys of politicians do not disrupt the voting processes further.

“Security agencies to step up and do their jobs. Security agencies cannot fold their arms and watch political thugs disrupt the national election, they must thus realised their loyalty is first and only to Nigeria and no one else,” the group stressed.

Observers are also asking what happened to the president’s order that ballot box snatchers be shot at sight as there were no reports that most of those who perpetrated the violence were arrested.
For instance, in Ago Palace Way, witnesses reported that security operatives looked the other way while the hoodlums were chasing away would-be voters and destroying electoral materials.