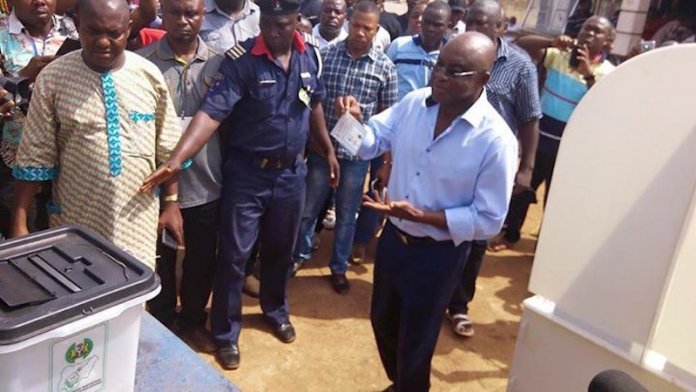 A former President of the Senate, Senator David Mark, has said that peaceful conduct of election is possible in Nigeria if politicians and relevant authorities comply with the rules of the game.

Mark said shortly after he cast his vote in Otukpo, Ward 1 in Benue State: “The peaceful exercise so far in the state is reassuring that elections can be conducted orderly in Nigeria.”

The former Senate helmsman accompanied by his wife Helen at the polling centre stated: “I expect that this peaceful trend that is characteristic of my ward and home is replicated in every part of the country. For me, election should be a game that must produce a winner or loser. We do not need to lose our heads because of election.”

Mark enjoined the security operatives and the Independent National Electoral Commission (INEC) to carry out their assignments creditably without fear or favour, saying that the interest of Nigeria must be paramount at all times.

He however told the electoral umpire to be conscious of any lapses or shortcomings in the current exercise with a view to correcting them in the forthcoming polls.

In the same vein, the former President of the Senate urged politicians to abide by the rules of the game, saying: “There is no need to resort to self help or violence to thwart the process no matter which side of the divide one belongs.”

Mark believes that politics is a noble job to render service to the people and not otherwise.