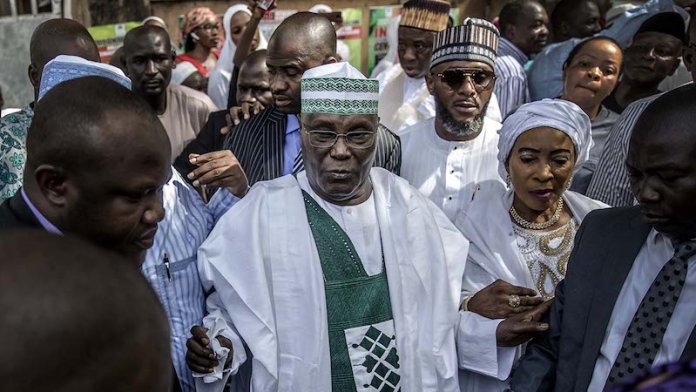 The presidential candidate of the Peoples Democratic party, Atiku Abubakar, said he would accept the outcome of today’s election if it was transparent, free and fair.

Atiku in campany of his wife Titi disclosed this at Ajiya 012 polling unit in Yola, Adamawa State capital shortly after casting his vote, noting that he looks forward to a successful transition of government.

The presidential candidate who voted at exactly 10:07am further explained that because he was a democrat he would accept the outcome of the election.

He said he was impressed with the massive turnout of voters and the peaceful manner the people were conducting themselves at polling centres.

Atiku appealed to security and INEC officials to be transparent and fair so that the mandate of the people would not be tampered with.

He described the election as peaceful.

Mr Boss Mustapha, the Secretary of the Government of the Federation (SGF), who voted at Gwadabawa polling unit expressed satisfaction with the massive turnout of voters adding that the peaceful manner voters conducted themselves is impressive.

He said the attitude displayed at most of the units indicated that Nigerians now know the importance of voting and the need to vote for a good leader to emerge as the winner of the presidential and national assembly elections.

Governorship candidate of PDP in the state, Ahmadu Umaru Fintiri, who voted at Kirchinga 004 polling units in Madagali local government area, where Boko Haram insurgents invaded recently, said the conduct of the election in that area was peaceful.

He said that electoral materials arrived at 9am in his polling unit adding that voting started at about 10am.

Govenor of Adamawa State and governorship candidate of the APC, who voted at 10:15am at Abu Muwachi of Kolore ward of Mubi North local government area, also expressed satisfaction with the massive turnout of voters.

He urged the people not to take laws into their hands but abide by electoral law and regulations.

However, the exercise so far in Yola, the state capital, was very peaceful amidst tight security, as voters were seen queuing as early as 6.30 am.

Local Goverment Area of the state, Mr Vincent Audu, told THISDAY that electoral materials arrived the polling unit as early as 6am and accreditation and voting started by 8am

He said there was massive turnout of voters and the exercise was peaceful and transparent.

In Hong and Gombi local government areas, electoral materials arrived early but the exercise was delayed due to inadequate security.

According to a source, the security deployed in some polling units in the area were yet to turn out for election as at about 10am.

In Madagali local government area, election materials arrived in most of the polling units at about 8am and exercise began at about 9.30am