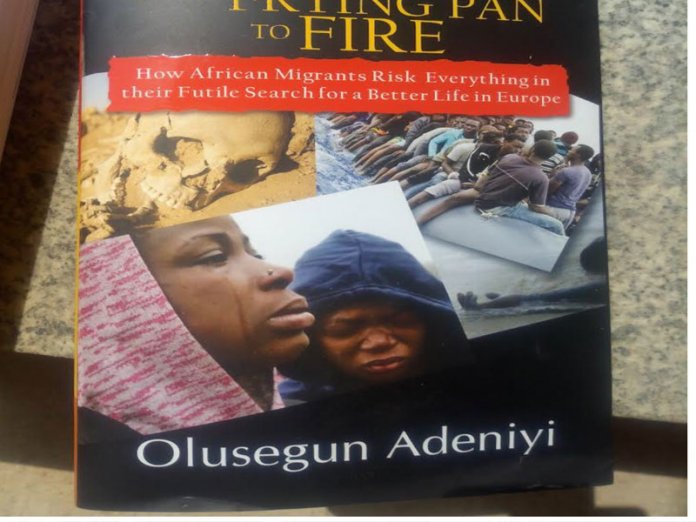 In his latest book, ‘From Frying Pan to Fire,’ former presidential spokesperson and chairman, Editorial Board of THISDAY Newspaper, Mr. Segun Adeniyi, succinctly captures why embarking on irregular migration through the deserts the Mediterranean Sea is dangerous, painful and needless, writes Shola Oyeyipo

So much have been written and said about the dangers involved in the desperate quests among Africa youths to escape the scourging poverty in this clime. Many expert opinions have been documented on those daring the desert on foot and the seas on rickety boats, but none has painstakingly documented first-hand agonies of African migrants as a new book, ‘From Frying Pan to Fire.’

Written by no one else but the chairman, Editorial Board of THISDAY Newspaper and former presidential spokesperson, Mr. Olusegun Adeniyi, ‘From Frying Pan to Fire,’ is an extensive catalogue of series of heart-touching and emotionally wrenching stories of hopelessness and harsh realities that have cost several thousands of unlucky participants in the deadly voyages.

From the opening page of the book, which is also pictorial, to the thirteenth concluding chapter and the postscript, Adeniyi made it abundantly clear that as far as issues of irregular migration is concerned, it is pointless complaining about darkness, but instead, bring the candle light by doing everything necessary to discourage what has now grown to become a suicide mission by many promising young Africans, many of who are Nigerians.

By writing in the opening paragraph that: “With wooden caskets, each of which was adorned with a single rose flower, 26 female migrants from sub-Saharan Africa were buried on November 17, 2017 in the southern city of Saerno, Italy. The Catholic Monsignor, Antonio De Luca, who presided over the solemn ceremony, told the congregation that the deceased women and girls as well as two ‘creations of nature’ (referring to two pregnant women among them) died in pursuit of better life,” Adeniyi simply prepared readers for what would be like embarking on the trip practically.

The book never pretended about the fact that life in most of the countries where migrants emanate from are unbearable and that the aspiration of the voyagers is simply one, to better their lots, but it emphatically underscores that such expectations end up as a mirage of inestimable dimension. So, while the focus was to discourage a furtherance of the waste of lives, it also points to the urgent need for leaderships in African nations to reverse the growing spate of poverty which is making many risk everything, including their lives.

According to the renowned journalist and author of international repute, the grim pictures of the risks associated with trans-border movements are multi-various in nature, some of which can aptly be depicted in an overall context of; attacks by bandits and robbery in the desert, extortions, slavery, rape, turning travelers into sex workers to pay their unending bills, being sold into slavery as mere commodity, drugs, arrests and detention by authorities, the dangerous crossing of the sea and most painfully, the grim reality that the much sought after Europe is not necessarily Eldorado after all.

Nothing made it more convincing that the book was deliberately authored to bring to fore, first hand experiences of victims of the journey than when the author, in chapter four, related the unpleasant encounters of his biological younger brother, Agboola, who had several close shaves with death when he embarked on his own suicidal sojourn on three different ocassions.

“The harrowing experience of my brother as an irregular migrant to several European countries in the nineties-having travelled by road through Sahara desert to Lybia before crossing the Mediterranean Sea – has revealed the danger inherent in the adventure. What his story reveals is the futility of believing that the grass is greener on the other side, especially for the irregular migrants who are mostly uneducated and without any skills,” Adeniyi said, noting that the accounts were rendered from his brother’s perspective and words.

Agboola’s inspiration to take his chance was particularly sparked by the fact that he worked at the Apapa Wharf in Lagos, where armed with his West African School Certificate (WASC), he and some other younger men like him got menial jobs, but unsatisfied with that, he opted to travel as stowaway to the US.

He eventually made real his dream. Not just once but thrice and on every occasion, he returned disappointed and dejected.

Agboola said: “In my imagination, the escape from uncertainty and suffering to a blissful life would be executed from the waters of the wharf in Apapa, Lagos.”

So, on his first trip, he and his friend, Ijesha, got jobs on a US bound vessel and headed for God’s own country, but alas, they both ended up in Brazil. He was stranded in Rio Janeiro, detained, suffered and had to re-think his mission.

“Realising that all the jobs available in the part of Rio where I lived were not well-paying, I began to make comparisons. My port job in Lagos I reckoned was far better than quite a number of the jobs available. This sparked retrospection, and after several weeks of living like vagrant in a foreign land, I decided…when I returned home, my family was happy to see me again but I could not tell anyone what I had experienced. I pretended nothing happened,” he revealed.

In what underscored the plights of many young African who opt to take this risk, explaining why he once again headed for Europe by road, Agboola said back home and with nothing to do, he drew ceaseless inspirations from friends abroad who promised he would get a job to do over there.

Armed with some money, he took off from Iddo Park in Lagos, landed in Kano and passing through Katsina they entered Niger. With the aid of their traffickers they got to Maradi, Tahoua, Algadez, Gadayah, Assamakka and he eventually arrived at Tripoli. At the end, he got to Sicily, Italy.

It was indeed a scary journey by his account. Of all the sad tales he told, there was one very touchy incident where he said: “Among the fatalities were a lady and her twin boys. It is one of the most horrific experiences I ever witnessed. I recall one of the boys was sick while we were crossing the sea and he later died. In her moment of grief, the mother accidently slipped and fell into the sea leaving her boy to the mercy of other migrants, who briefly conferred among themselves and reached a conclusion. With none of them prepared to take responsibility for the boy, he was also thrown into the Mediterranean Sea.”

Between his journey to Sicily, return to Nigeria and another journey back to Spain, and again, back to Nigeria still in search the quest for the much sought after greener pasture, the author’s brother made sterling revelations that would surely captivate readers. There were so many deaths.

The long and short of it is that he saw what could be called hell. He is back in Nigeria today and doing well for himself. He would never advise anybody to take the chance he took some years because he has seen the dangers and futility involved.

The recommendations in Adeniyi’s book are therefore very instructive. He didn’t just tell the graphic story of the menace. He emphasised the urgent need for a serious campaign in Nigeria “because the traffickers are targeting the most vulnerable of our citizens.”

Not oblivious that African leader have plethora of ideas in tackling the problem, Adeniyi said the major problem is the lack of political will to stop the human wastage.

“Despite the fact there is a decline in the number of migrants arriving on European shores; the rate of fatalities is increasing. With more than 850 deaths recorded in June and July 2018 alone, marking the Mediterranean crossing as the deadliest see route in the world,” Adeniyi lamented.

The book is 182 pages in all. It is printed in 16-point font size, making it easy to read. Authored by a thoroughbred journalist, it is devoid of error and it is written in easily understandable English.

Though interestingly, it is not produced in commercial quantity, this book is recommended for everybody. Policy makers at all levels must endevour to get a copy and read it over and again. Teachers, students and every other person who seek after knowledge for its own sake would fine the work worthy of their time.