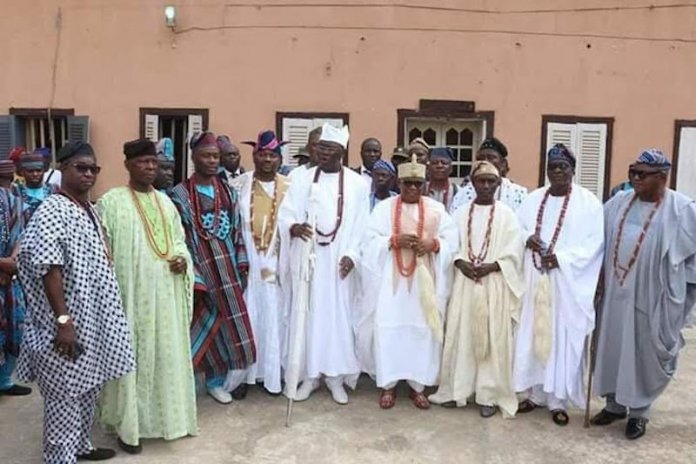 For the sole reason of promoting the Yoruba culture in the Diaspora, the O’odua Progressive Union was formed. Recently, the union held its fifth world congress in Ondo State, where it pushed for restructuring and socio-economic roadmap for the future, Ayodeji Ake writes

For five days recently, Akure, the capital of Ondo State was agog. Hundreds of people literally invaded the city from all parts of the world, as the Oodua Progressive Union (OPU) held her fifth World Congress in the community. The group, which comprises Yoruba men and women in the disapora, currently exists in about 84 countries across all continents.

It was not surprising therefore at the world congress when over 1000 delegates from different countries participated at the meeting, even as some members of the Oodua Peoples Congress (OPC) also converged on the venue to show solidarity with the OPU members.

Founded by Aare Onakakanfo of Yorubaland, Iba Gani Abiodun Adams to promote the values of Yorubaland outside the shores of the country, the OPU congress commenced with a courtesy call on the Deji of Akure, Oba Aladetoyinbo Ogunlade. The Convener of the OPU, Iba Gani Adams led the large entourage comprising hundreds of members of the OPU and OPC to the palace of the first-class monarch.

He told the monarch that it was an annual tradition for members of the OPU to visit royal fathers for royal blessings during their congress. He explained that the intention of the group of Yoruba sons and daughters in the Diaspora was promote the cultural identity of Yoruba race and help develop a socio-economic roadmap for the future.

Recalling the first world congress of the OPU that was held in Ikeja in 2015 he said the Ooni of Ife, Oba Adeyeye Ogunwusi was the host in Ile Ife in 2016; Alaafin of Oyo, Oba Lamidi Adeyemi was the host in Oyo in 2017; Alake of Egbaland, Oba Aremu Gbadebo was the host in Abeokuta in 2018, adding that this year, they are in Ondo State, his own state with the Kabiyesi, as the royal host.

In his response, Oba Ogunlade said the visit was timely and informative, adding that the group had a prominent role to play in making Nigeria great. This is just as he charged the OPU members to be good ambassadors of the Yoruba race in their respective abodes.

While welcoming the guests, Aare Adams explained what the group was all about. According to him, OPU is a social and economic organisation, comprising prominent Yoruba indigenes in the Diaspora. Charging the group to continue to be good ambassadors of their race he said: “We are a self-dependent organisation formed in 2011, and our objective is to promote our cultural identity and foster unity among the Yoruba race.

In his lecture, Adesanya Haastrup urged members of the group to instil the attributes of a selfless leader. Reteirating his belief in the leadership qualities of Adams, he said the Yoruba leader had paid the price for the position through series of sacrifices and selfless services.

In the same vein, the Zaki of Arigidi, Oba Olanipekun, urged the OPU members to support their leader. He said the platform was to help transform the group to be the rallying point of Yoruba the race.

The North American coordinator, Shola Agboola said the success of the OPU congress had sent a strong signal to the world that the group was ready to make remarkable impact.

The following day, the group had a series of debates and discussions on sundry issues. A communiqué was thereafter issued. They thereafter had a dinner and social night even as the female juju artiste, Queen Ayo Balogun thrilled the guests.
The following day, the group embarked on sight-seeing to the mysterious Ikogosi warm and cold springs in Ikogosi-Ekiti and the Arinta Waterfalls, Ipole Iloro, both in the neighbouring Ekiti State.

At Ikogosi, Adams charged the Ekiti State government to restore the lost glory of the place.
“The state government should urgently transform Ikogosi. It has a history of being one of the leading tourists destinations in Nigeria. There should be various facilities like a police station to ensure effective security, a mall, an accessible road leading to the site. Ikogosi has the potential to bring huge revenue to the state,” he said.

The group also visited the historic Idanre Hills where they met with the Owa of Idanre, Oba Fredrick Adegunle Aroloye Gbolagunte. Members of the group later climbed the hills. There, Adams
described Idanre as a prominent town with a rich cultural history. He intimated the monarch with activities of OPU and OPC, and urged the community to resuscitate the Oke Idanre Festival, noting that it will enhance the development of the town.

In his response, Oba Gbolagunte said he was delighted to play host to the Generalissimo of Yorubaland.

The group were further intimated that the Idanre Hills has 670 steps with several tourists’ attractions like the ancient Palace, community school built in 1896, community prison, Arun River, Ark of Noah, footprints and irremovable writings on the wall and several others.

General Manager, of the Idanre Hills Resort, Mr. Adee and two supervisors, Femi Ayotunde and John Cletus conducted the team round the sites before the group later converged on Ile Ife for the 2019 edition of the Oodua Festival. Among the features was the Oodua Beauty Pageant which was won by Miss Lolade Lawal, a 22-year-old student of Obafemi Awolowo University, Ile Ife.

The following day, Adams led the delegates to Ooni’s Palace, as part of the activities for the annual event. Speaking on behalf of Ooni, Lowa Adimula of Ife, High Chief Adekola Adeyeye, said the visit was a pleasant homecoming for both the OPU and OPC.

Adams said the annual festival was an effort by the Olokun Festival Foundation (OFF) to identify with Ife, the hometown of all Yoruba sons and daughters. At the festival, Adams canvassed for more unity among the Yoruba people, just as he said agriculture could be used to drive the development of the South-west.

“ I know that agriculture remains the best occupation that can guarantee equitable growth and development in the South-west. In Botswana for example, a large number of the people in the country breed cows to boost the economy. The population of cows in the country is far higher than the population of the people. There, everybody is involved in full scale agriculture, from the small scale to large and mechanised farming. Here in the South-west, we can do the same by developing a master plan for agricultural development and transformation.”

He also charged the government to ensure free, fair and credible election, even as he insisted that Nigeria would not achieve its potential without restructuring.

Dignitaries at the event include the Obalufon of Ife, Oba Idowu Adediwura; Lowa Adimula of Ife, High Chief Adekola Adeyeye; Obadio of the Source, Oba Farotimi Faloba, and several prominent monarchs, as well as delegates of OPU and OPC.