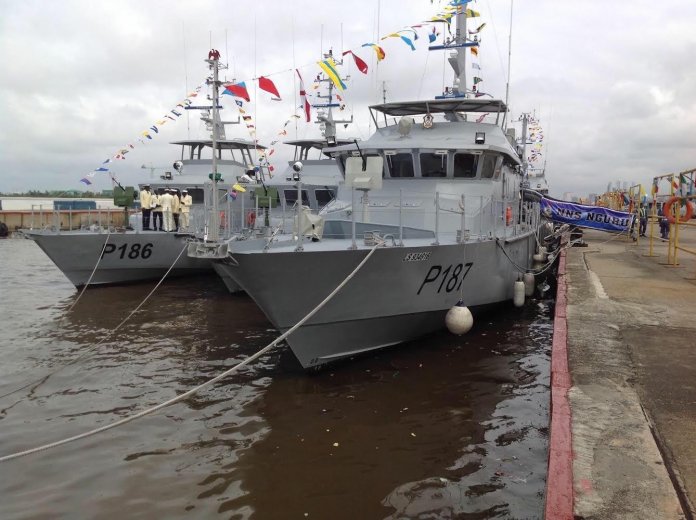 Chiemelie Ezeobi, who takes a look at Nigerian Navy’s operations in 2018, writes that the sustained fight against maritime crimes is yielding results despite daunting challenges

Given that Nigeria relies on the sea for about 90 per cent of its import and export with oil being a major part of the trade, the thorny issue of insecurity in it’s maritime domain is undeniably a major source of concern.

Therefore, for the Nigerian Navy (NN), the mandate to protect the nation’s maritime domain is sacrosanct. In furtherance of this statutory mandate, it became necessary to adapt its operational concepts with the activation of new dedicated operations, in addition to routine operations, all aimed at ensuring a safe maritime domain for economic activities to thrive.

It is imperative to state that while significant gains were achieved in 2018 leading to increased output in maritime trade and particularly oil production, those gains need to be sustained against the backdrop of an observed trend of threat migration, especially with regards to incessant illegal refining of crude oil.

The navy at its first quarter assessment held at the naval headquarters had cause to review its threat assessment for last year. According to the Chief of Training and Operations (CTOPS), Rear Admiral Mackson Kadiri, who did the assessment, the reported incident of piracy on shipping in Nigeria’s maritime domain indicates that there has been a sustained downward trend in the number of successful attacks on shipping.

He further noted that it is also gratifying to report that there has been significant reduction in the cases of attack on OGI. The few attacks recorded took place in the swamp/onshore areas, with none reported against OGI located offshore during the year in focus.

The Nigerian Navy over the years has been focused on capacity development in order to improve maritime security in Nigerian waters, and the GoG. This, in order to combat the threats in Nigeria’s maritime domain, the NN adopted the Total Spectrum Maritime Strategy (TSMS) to guide its operational engagements.

This concept of operations is based on a proactive layered response to five conflict spectrums characterised by distances to and from the coast.  The three operations commands of the NN are organised to carry out maritime security functions as required by the strategy. The NN fleet has an array of sea and air platforms which is regularly rejuvenated in order to achieve a balanced mix of capabilities to meet threats amongst other commitments in the GoG region.

Taking a look at the NN scorecard for 2018, it’s operational engagements were geared towards securing the internal, territorial and EEZ spectrums of the maritime domain and contributing to counter insurgency and counter terrorism efforts on land through several operations.

First was Operation TSARE TEKU, which was a dedicated naval operation with the mandate to combat attacks on shipping and other illegal activities in its designated area, as well as protect offshore oil and gas installations. As records indicate, from January to December 2018, a total of 34 pirate attacks on shipping were reported with nine successful and 25 unsuccessful.

Furthermore, a total of 20 sea robbery attacks were reported in 2018 with six successful and 14unsuccessful. Since the inception of the operation in April 2016, there has been drastic reduction in reported incidents of attack with even fewer successful attacks. Additionally, a total of 46vessels andbarges were arrested for involvement in maritime crimes during the period under review.

Given that the significant improvement in security of shipping in Nigeria’s maritime environment, the NN is in the process of rounding up Op TSARE TEKU V and plans are underway to flag off Op TSARE TEKU VI.

Secondly, the navy had emplaced the Choke Point Management and Control Regime since most of the attacks at sea originate from land. This involved the deployment of armed personnel in houseboats in strategic locations within the creeks supported by patrol boats. So far, nine houseboats otherwise known as Naval Security Stations (NSS) have been deployed where crude oil theft and illegal refining activities are known to be prevalent. More locations have been identified for deployment of NSSs in the year 2019.

Since the introduction of the Choke Point Control Regime, several arrests and destruction of barges and other vessels used for conveying stolen crude oil and illegally refined productshave been arrested. For instance, a total of 31 large wooden boats were arrested for involvement in illegalities in 2018 while 176large wooden boats were destroyed within the same period.

Speaking further, Kadiri said the third measures they sustained in 2018 was the

Operation RIVER SWEEP, which was activated in early January 2017 given the noticeable increasing activities of illegal refiners, particularly in Delta and Rivers States.

Furthermore, a total of 104 speed boats and 340 suspects were arrested for involvement in either Crude Oil Theft (COT) /illegal bunkering or smuggling. Kadiri disclosed that the quantity of crude oil lost as a result of illegal oil refining activities in 2018 is about 277,040 barrels, while about 23.1 million litresof AGO, 212,610 litres of PMS and 1.2 million litres of DPK were also lost.

Fourthly, the navy through its Maritime Domain Awareness (MDA) centres carried out round the clock surveillance of Nigeria’s maritime space using the Regional and Maritime Awareness Capability (RMAC) and Falcon Eye facilities in addition to the use of vessels and helicopters. Already, the navy has 24 MDA Centres located across the Nigerian coastline. These centres ensure effective surveillance of all vessels in our territorial waters whether fitted with Automatic Identification System (AIS) or not.

Due to their availability, NN patrols are now more mission oriented with attendant reduction in operational logistic cost

s. Using the NN MDA facilities, prompt reporting of attacks of vessels at sea led to foiling of several piracy incidents. With the arrest of 46 vessels and barges in 2018, it is envisaged that the MDA facilities would help to present a complete, clear, detailed and updated maritime situation of Nigeria’s maritime domain and by extension the Gulf of Guinea when the whole proposed sites are completed. This will assist in vectoring NN ships to accurate locations of targets of interest with economy of effort, surprise and cost effectiveness.

Furthermore, the navy had an enhanced response capability last year. This was made possible through the acquisition of more platforms. Noteworthy is the additional six OCEA Class patrol vessels namely Nigerian Navy Ship (NNS) NGURU, SHIRORO, EKULU, OSE, GONGOLA and CALABAR as well as the induction of several riverine patrol boats as at December 2018 for seaward and riverine operations.

Accordingly, he said they hold regular international conferences and sea exercises with navies of other nations and major maritime stakeholders for the purpose of capacity building, intelligence and information sharing. These consultations he said have deepened stakeholders’ understanding of emerging security situations and the need to enhance collaboration.

For instance, he disclosed that the NN successfully hosted International Maritime Conference and Regional Maritime Exercise in May/June 2018.  Participation in EXERCISE OBANGAME Express and other regional exercises in 2018 he added, were all aimed at fostering international and regional cooperation and synergy of efforts in tackling the myriad of challenges in Nigerian maritime environment.

Notwithstanding these acquisitions, there is however need to increase NN’s operational capability by acquiring more vessels in order to enable it respond more effectively to contemporary and future threats. It is however essential to note that in spite of the federal government’s intervention in support of the various NN operational engagements across the country, the service would still require enhanced resource allocation to sustain a balanced force capable of discharging its roles effectively.

Consequently, there is also need for the government to do much more in terms of funding in view of the various ship rehabilitation/repair programmes, all geared towards operational availability of capital ships to enable the service meet its statutory responsibilities. Also, the NN would need more Offshore Patrol Vessels, helicopters and predator drones as an immediate intervention.

Just as the scorecard highlighted the threats to legitimate activities in the nation’s maritime environment as well as the efforts of the NN in combating them, it is imperative to note the nexus between the successes and the availability of adequate resources, including international and regional collaboration.

Again, there is still need to address other outstanding issues and capability gaps affecting NN operations like need for NNPC to impress on oil companies to emplace more effective surveillance/monitoring mechanisms on their crude oil pipeline networks is also necessary. Going forward, the navy should remains committed and resolute in ensuring safer waterways and sea lanes for Nigeria’s economy to thrive.