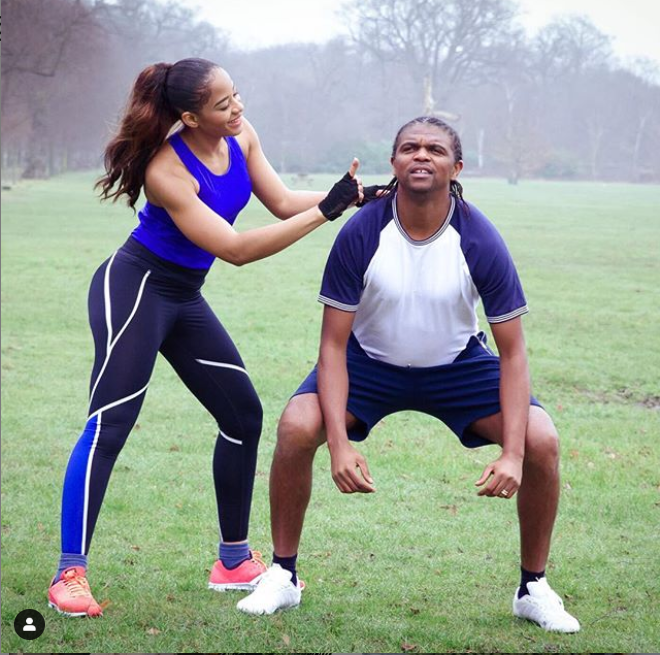 Football legend, Nwankwo Kanu and his better half, Amarachi have lived happily together, with Amara helping out with his fitness, writes Ferdinand Ekechukwu

The saying goes that a happy couple stays together, eats together and plays together. And to add, exercise together. This could be said of Nigerian football legend Nwankwo Kanu and his lovely wife Amara as they were pictured during a recent workout session. They look nothing but beautiful together. In the picture, the couple can only simply be described as perfect.

Kanu, 42 and Amara, 32, became husband and wife almost 15 years ago. Ever since that marriage in 2004, the couple have lived happily together after, except for the fleeting but shocking moment sometime last year when Amara reportedly called out her brother-in-law, Ogbonna Kanu on social media for allegedly taking her son’s ticket and attending a football match which was meant to be for her son and his father.

The couple is blessed with three adorable children; two sons and a daughter. The top priority in the life of Amara is considered to be her husband and children. In her interviews, Amara had repeatedly claimed that she married for love and had sincere feelings for her husband. It was believed that before her marriage, Amara was not sure what to do and certainly, she was not a football fan. But then everything changed.

Amara is not one to hug the spotlight: “I had to make a personal decision to stay private for a very long time in order to build what I have built for myself and my children. I understood this from a very young age. I ignored critics and paid no attention to what people said. I overlooked Facebook and I only signed on to the platform in July 2011.”

For any man, support and care of his wife and his family are very important. Although Kanu married Amara at a relatively early age in Nigeria, she already had the true feminine wisdom that helped her to keep the marriage strong and made the family happy. When she moved to the United Kingdom, she went back to the university where she bagged a first degree in Architecture and later a Masters in Entrepreneurial Management from European Business School, London.

Amara, the certified fitness expert, is noted to be highly conscious about, and an advocate of, healthy living, especially when it was her that inspired her husband’s corrective heart surgery in 2014, 17 years after his first heart operation when he was diagnosed with congenital heart defect in 1996. It was during one of their routine exercises that Amara had ‘pushed’ him to go for full diagnosis after she noticed his irregular heartbeats. According to her, his heartbeat sounded much louder than normal. She was listening to his chest, and it sounded odd. She would thereafter write a book about her battle for her husband’s life and bringing him back to full health after the surgery. The book, which was unveiled at the Emirates Stadium in London on July 14, 2017, was dedicated to other sports stars who have suffered heart problems, like Fabrice Muamba and Cheick Tiote.

The event attracted Olympic gold medalist, Mo Farah and a host of other sports celebrities.