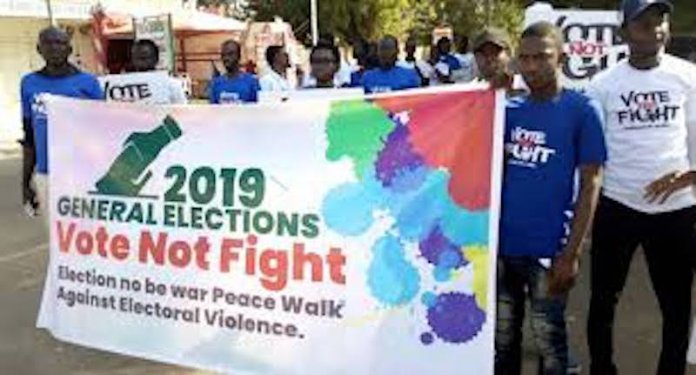 A civil education and vote enlightenment group, ‘Vote Not Fight: Election No be War,’ Tuesday organised a rally to promote peaceful election and issue-based campaigns in Katsina State.

The rally, which drew members of the group from different local government areas of the state, started at the old Government House, Katsina to the office of the Independent National Electoral Commission (INEC).

Addressing journalists during the protest, the Chairman of the group, Comrade Bashir Dauda, said the aim of the protest was to re-orientate Nigerian youths to shift from using violent means of expressing their political opinions to peaceful and constitution means.

According to him, the group also enlightened young people to participate in the political and electoral processes in order to make themselves relevant and their voices heard.

“The objective of the campaign is to increase youth voter turnout and peaceful participation in elections, non-violent and positive youth engagement with political candidates and stakeholders on issues affecting them and create awareness among young people on the importance of voting correctly,” he added.

They were received by the state INEC Director of Education and Publicity, Muhammed Abari, at the commission’s office, where he assured them of INEc’s readiness to conduct free, fair and credible polls.