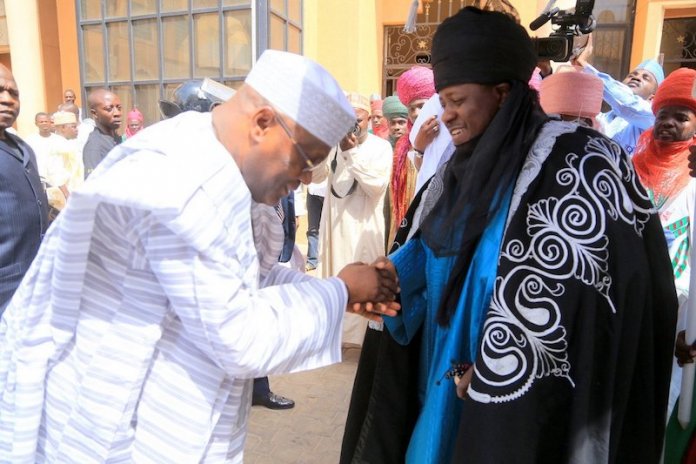 Speaking at the Abubakar Tafawa Balewa Stadium (ATBS), Bauchi, the venue of the campaign rally, the presidential candidate of the party, Alhaji Atiku Abubakar, promised to “change the change positively and get Nigeria working again if elected”.

The presidential candidate, who addressed the thousands of ecstatic party’s supporters in Hausa, berated the All Progressives Congress (APC)-led administration for failing to positively impact on the lives of the people in the last three years, declaring that from all indications, the administration does not have anything else to offer the people other than failure.

On the recent flag-off of oil prospecting in the North-east particularly in Bauchi done by President Muhammadu Buhari last Saturday, the PDP presidential candidate described it as a “political scam done in order to confuse the public and get your votes for another wasted four years. You should not allow that to happen”.

He further assured the people that his party has the antidote to fix Nigeria within a short period of taking power, declaring that all the people in the party have been tested and proven to be worthy of leadership positions of the country.

Atiku used the occasion to warn security agencies to “steer clear of partisan politics, your primary and constitutional role is to protect lives and properties of every Nigerian irrespective of political parties. Don’t mess up the electoral process by exhibition of loyalty to the party in power, all eyes are on you to perform above board”.

In his own address to the crowd, the National Chairman of the PDP, Prince Uche Secondus, said that “President Muhammadu Buhari is weak, tired and cannot deliver dividends of democracy to Nigerians”.

The national chairman added that Atiku will restore the lost glory of the country if voted into office and called on the electorate in Bauchi State to cast their votes and wait for the votes to be counted and record the outcome in order to avoid the rigging plans of the APC.

According to him, “Nigerians are hungry and I want to urge you to vote for Atiku because a vote for him is a vote for employment. Vote for security, vote for food”, declaring that the “mammoth” crowd he saw at the venue of the campaign is an indication that the PDP has returned to Bauchi.

The Speaker of the House of Representatives Yakubu Dogara, who also took his turn to speak, said that the PDP is not advertising her candidate (Atiku) because he’s not just from the North-east but because of the potentials he has.

“Wherever we have gone to, the people has responded showing that the PDP has gained acceptance. We are not just advertising him because he is from the North-east but because he’ll work. He will chase away hunger from Nigeria, give our children education and get employment for our children,” he said.

Dogara then called on the people to cast their votes for Atiku because he has the experience and the capacity to deliver the people of the North-east from the “diseases” plaguing it.

In his address, the gubernatorial candidate of the PDP in Bauchi State, Senator Bala Mohammed Abdulkadir, lamented the state of governance in the state, saying that the state government under the leadership of Governor Mohammed Abubabakar has failed the people by not delivering on his campaign promises.

Bala Mohammed alleged that: “Our children cannot go to school; there are no jobs for our youth; our women are dying; nothing is being done to address these problems in the state. Our salary bill has increased from N2.2 billion to over N5 billion.”