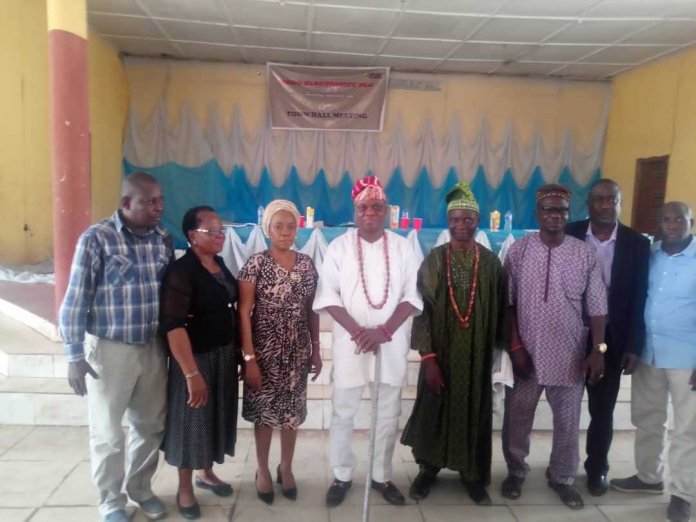 Ayodeji Oke writes that power supply in 10 out of the 21 distribution substations in the Igbokoda community in Ondo State was recently restored, thus illuminating the town, which had hitherto been plunged in darkness for years
For residents of Igbokoda in Ilaje Ese Odo Local Government in Ondo South senatorial zone, who have resigned their fate to living without electricity for the past five years, their joy knew no bounds last Wednesday as Vice President Yemi Osinbajo commissioned the restored power project facilitated by the BEDC Electricity Plc. (BEDC) and Niger Delta Power Holding Company (NDPHC), which jointly completed work on the rehabilitation of the power project in the town.
With the commissioning by the vice president flanked by Ondo State Governor, Mr. Rotimi Akeredolu; Executive Director, Commercial of BEDC, Mr. Abu Ejoor; Chief Technical Officer, (CTO) Engr. Ashok Acharya and officials of NDPHC, 10 out of the 21 distribution substations in the Igbokoda community came on with power supply thus illuminating the town which had been out of supply for so many years.
Energised Substations
The substations that were energised as at Wednesday include; Larada, General Hospital Secretariat road substation, Ikuomola, Ilara, Orioketilu, Church substation, Okoga College road/Omotehin, GRA1, GRA4/NDDC and Broadstreet substations.
The project which is an ongoing exercise is expected to extend to Okitipupa and other parts of Ondo South senatorial zone in due course.
Therefore, it’s a given that restoration achieved by BEDC with the speedy rehabilitation of the power project in conjunction with NDPHC under the National Independent Powder Project (NIPP) will bring positive effect on the social and economic activities in the area, given that it has always been the central town for inhabitants of the Ondo South senatorial district of Ondo state comprising Okitipupa, Ireless, Ilaje, Ese-Odo, Odigbo and Ile-Oluji/Oke-Igbo local governments due to the presence of several amenities.
The belief by the communities is that if the availability of power supply is addressed, other improvements will follow given that outage has greatly affected social and economic activities in the area, just as people of the area had resigned their fate to living without electricity.
Rehabilitation
It will be recalled that the federal government had listened to the restive residents of communities under Ondo South Senatorial Zone over their power rehabilitation project as it directed the NIPP to join forces with BEDC for the speedy rehabilitation of the whole network across four local governments namely; Okitipupa, Ese-Odo, Irele and Ilaje local governments in four phases.
Indications to this effect emerged recently after the joint team of BEDC engineers and the NIPP officials worked on the Okitipupa 33Kv overhead line project which covered the aforementioned local government areas in line with the charted out the schedule for the commencement of the whole network rehabilitation.
For the Ode-Aye community in Okitipupa Local Government Area of Ondo State, which had been without electricity supply for almost seven years, theirs was restored on Christmas day after a massive reconstruction jointly executed by NDPHC/NIPP and BEDC, representing the first phase of the Ondo South power restoration.

Expectedly, the restoration of power to Ode Aye attracted the commendation of the traditional, Oba William Akinmusayo Akinlade, who thanked the staff and management of BEDC for taking the community out of darkness.

This restoration was made possible because BEDC management, led by the Chief State Head, Ondo/Ekiti states, Mrs. Kunbi Labiyi, had charged the field staff to leave no stone unturned in ensuring that Ode-Aye people enjoyed electricity beginning from the 2018 Christmas. Another factor that played in was the charge by the Ondo State Governor, through his Technical Committee on Power that everything must be done to end the unacceptable darkness that had enveloped the region in the past 12 years.

Constraints
BEDC it would be recalled, had commenced rehabilitation work on the network but slowed down due to constraints of thick vegetation, and lengthy feeder, which made the rehabilitation work prone to faults; a development which accounted for the recent protests by youths of the affected communities.
As a step forward, BEDC and NDPHC had collected survey samples of other routes to be used in re-routing the affected lines for the areas under rehabilitation, as a permanent solution to hitches before the NIPP intervention support.
In fact, the BEDC had extended restoration work to Ondo North, South, Odo Aye and Okitipupa, while 19 communities had been connected to the grid in Ondo South including Ore, Odigbo, Adaja and Liyetu among others.
In Ondo North, 34 communities have been connected including Gedegede, Ikun, Eriti, Oke-Agbe, Ikare, Arigidi, Oba-Akoko and Ikaram among others.
Reconnectivity in Ekiti
Prior to the reconnectivity in Ondo State, Ekiti first had a taste of BEDC’s commitment to power communities. In December last year, in fulfilment of its pledge to the Ekiti State Government,  BEDC had restored electricity supply to some communities in Ekiti state namely; Erinijiyan, Ipole-Iloro and Ikogosi.
Thus, it was a memorable Christmas will remain a memorable day for the Eka Meta communities of Ekiti State, as BEDC restored electricity supply to the three communities, which are linked to the Ilawe/Aramoko feeder, and had experienced epileptic power supply for some years. However, in fulfilment of its mandate, the supply source for the community was changed, whilst the feeder and entire network was rehabilitated and restored on Christmas day. Again, this was done in collaboration with NDPHC under the NIPP.

Also, BEDC during a meeting with the Ekiti State Governor, Dr Kayode Fayemi, had assured that power would be restored before December end given the numerous tourist destinations the state boasts of, which includes; Ipole-Iloro, Ariata Waterfalls in Ipole-Iloro and  Ikogosi Warm Spring Resort. At that meeting, the Managing Director/CEO, BEDC, Mrs. Funke Osibodu, had hinted of the ongoing rehabilitation of Ikogosi/Erinijiyan/Ipole-Iloro line on the Aramoko 33kv feeder, adding that communities in these areas would have more stable power soon.

It is imperative to state that at the moment, BEDC is presently partnering the Ekiti State Government for a more improved supply to enable it power its streetlights for about 10 hours daily, against the present three hours situation.