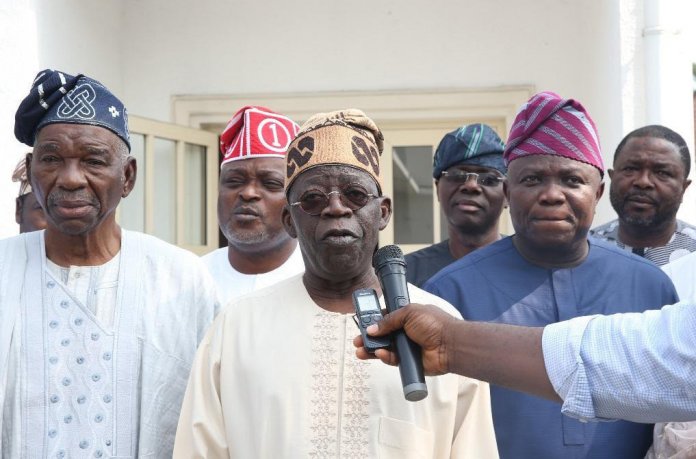 National leader of All Progressives Congress (APC), Asiwaju Bola Tinubu, on Sunday finally put the impeachment saga which had dominated the polity in the last one week in Lagos State to rest, declaring that there is no longer a question of impeachment of the State Governor, Mr Akinwunmi Ambode.

Speaking after a peace meeting brokered by the APC leadership in the state to end the rift between the governor and lawmakers which was held at Lagos House, Marina, Tinubu said it was gratifying to note that the conflict between the Ambode and the members of the State Assembly had been amicably settled.

Accoding to a statement issued  by the Chief Press Secretary to the governor, Habib Aruna, Tinubu, who spoke on behalf of all the APC leaders in the state, said the executive and the legislative arms of government had resolved to work together in the interest of the State.

“We held a meeting on behalf of Lagos, the entire Lagosians, our party – APC leadership. In the last one week, there has been noise about the conflict between the executive and the State Assembly. It is of great concern to all of us and particularly what Lagos represents across the country.

“We have been able to look into the source of various conflicts which is not uncommon in politics; what is the genesis of those problems? We are one big family and as a big family, you will have some rumples, you will have some disagreement. As leaders of the party, we have looked into that; we have looked into areas where we have to compromise, discuss and build the institutions, encourage the institutions to really do what is right.

“We have resolved there is no question of impeachment in Lagos State. Let the two arms of government communicate and continue to respect one another and build consensus and understanding. That is all about politics. Conflict and conflict resolution mechanism is inbuilt in any political system unless leaders are lacking in their responsibilities,” Tinubu said.

He thanked the governor, his deputy, Dr Idiat Adebule, and the leadership of the House for agreeing to the peaceful resolution of the conflict, saying it was evident that consequences of allowing such conflict to fester would have been dire not just for the state, but the entire country.

“We thank the speaker and the entire members of the House of Assembly leadership. We thank the governor and the deputy governor who had demonstrated firm respect for the party leadership in Lagos State.

“You know when Lagos sneezes, the rest of the political equation catches cold and we are very happy that we are able to resolve amicably. The deputy speaker is also here and all of them put together, we are assured that things will start to run smoothly in Lagos both the House and the government,” he said.

“The National Leader (Tinubu) has spoken and mine is just to confirm the decision. Conflict resolution is an essential ingredient of management. We have looked into the problem and the party has directed the two arms of government – the executive and the legislature to work together and very soon, the House will meet and resolve all grey areas,” Olusi said.

Others in attendance were all the members of the Governors’ Advisory Council (GAC), the highest decision making organ of the party in the state; governorship candidate of the party, Mr Babajide Sanwo-Olu, and his running mate, Dr Femi Hamzat, among others.