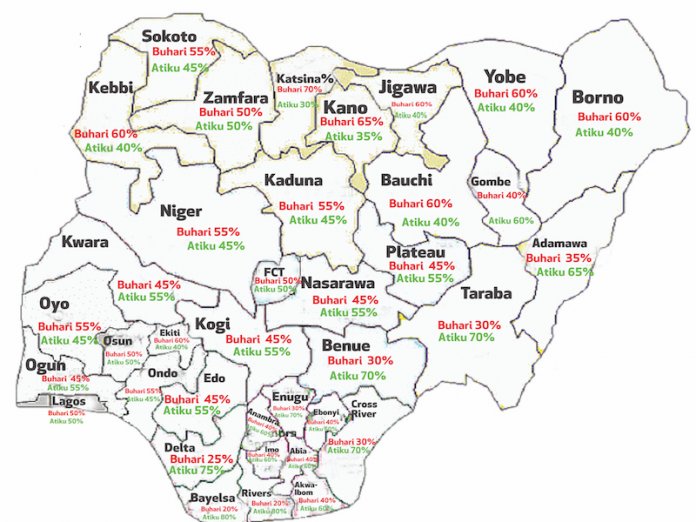 With just 13 days to the February 16 presidential election, the dynamics of the race for the nation’s top job indicate an interestingly tight and tough contest between the two leading candidates of the Peoples Democratic Party (PDP), Alhaji Atiku Abubakar and the ruling All Progressives Congress (APC), Muhammadu Buhari.

This latest development is not only evidenced by the frenzy of their campaigns, which has seen both candidates traverse many states and across the geo-political zones, but more strongly connected to the degree of acceptability that the two candidates enjoy, in what is fast becoming a popularity contest.

THISDAY’s recent field intelligence gathering, which reports a tight and tough contest, however, presents both state-by-state and geo-political zones analyses of what is obtainable by each of the two front-runners in the states, thus giving an evolving picture of what might ultimately be the regional standing of the candidates and their parties.

In the Kano, for instance, the race pictures a 65 per cent victory for Buhari and 35 per cent for Atiku. In Kaduna, while Buhari is likely to get 55 per cent of the votes cast, Atiku may post just 45 per cent. The race in Katsina is a no-contest as Buhari is sure to secure 70 per cent to Atiku’s 30 per cent.

In Sokoto, Buhari manages an edge over Atiku with 55 to 45 per cent sharing, but in Zamfara, the contest promises a 50-50 contest. Kebbi looks comfortable for Buhari with a 60 per cent advantage over Atiku’s 40 per cent. Buhari is also certain to prevail in Jigawa with a 60/40 margin over Atiku.

Thus, in the North-west, Buhari is sure of victory in at least six states, albeit with varying winning percentages, with a draw in one with Atiku.

The dynamics in North East varies differently from the North-west, because here, in Bauchi for example, Buhari is sure of some 60 per cent to Atiku’s 40, while in Borno and in spite of the growing insurgency, the votes may still go the way of Buhari, also with 60 to 40 per cent voting.

Atiku will put up a good showing in Adamawa with a 65 per cent advantage, leaving Buhari with 35 per cent. Moving on to Yobe, Buhari is positioned to score 60 per cent, leaving 40 for Atiku and the same equation is shared in Gombe – 60/40 – however in favour of Atiku. But the Taraba contest is a different one as it sees Atiku coasting home with 70 per cent and 30 per cent for Buhari.

Here in the North East, both candidates would have a very tight race with the states shared three each.

The summary here is five states for Atiku and one for Buhari.

Considered the real battleground because of the number of votes that is up for grab, the race in South-west is unavoidably tight. In Oyo, for example, Buhari will certainly top with 55 per cent, while Atiku gets the remaining 45 per cent of the votes. But in Osun, the situation is too close to call and might flip either way. It’s a 50/50 chance. The Osun equation is unlikely to be repeated in Ondo, which may give Buhari 55 per cent and Atiku 45 per cent.

Buhari appears comfortable in Ekiti, where he may likely get his highest votes in the zone with 60 per cent to Atiku’s 40 per cent. Interestingly, however, Ogun too may go the way of Atiku with 55 per cent to Buhari’s 45 per cent, because of the many factors that are currently playing out in the state. But the Lagos battle is a 50-50 ratio. The dynamics are quite intricate.

Curiously, the South-west goes the way of Atiku with three states to Buhari’s two, while drawing in one, Lagos.

Further South, the battle for the soul of South-east is almost predictable even without the enabling field work. This is because the entire zone would go the way of PDP, although with different percentages accruable to each state.

Starting with Imo, the heartland of the South-east, Atiku is sure of at least 60 per cent of the votes with 40 per cent concession to Buhari. The same ratio is obtainable in Abia, God’s own state: 60-40 in favour of Atiku. Ebonyi too is sharing her votes in the same 60-40 pattern, also in favour of Atiku, while Enugu, which is South-east’s safest state for the PDP, boasts 70 per cent for Atiku and 30 per cent for Buhari.

In Anambra, where Peter Obi’s home-zone advantage is certain to work for Atiku, the PDP candidate stands to get 60 per cent votes to Buhari’s 40 per cent. The final analysis in this zone sees Atiku clearing all the five states.

Similar to what obtains in the South-east, the entire South-south, too, might go the way of PDP with votes contingent on their voting strengths.

Rivers promises to deliver the PDP with a percentage of 80 to 20 in favour of Atiku, while Cross River will post 70 per cent for Atiku and 30 per cent for Buhari. Akwa Ibom, despite the current state of play, will still deliver PDP with 60 per cent and concede 40 to Buhari.

The South-south analysis also sees Atiku clearing the entire six states. As for the Federal Capital Territory, FCT, it looks like a 50/50 chance for the two candidates. It may go either way.