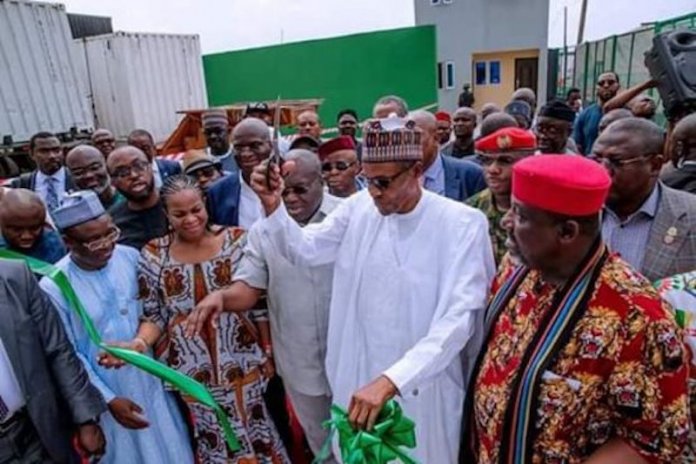 Funded by Ariaria Market Energy Solutions Ltd, the project is made up of independent gas-fired power plant, extensive distribution network and metering systems for each shop.

The market, which produces clothes, shoes, printing, tools’ fabrication and mechanical parts, is said to be receiving patrons in thousands every day.

Speaking during the inauguration of the project in Aba, President Buhari commended the Governor of Abia State, Okezie Ikpeazu, saying that without Ikpeazu’s commitment and cooperation, the federal government would not have actualised the project.

“I thank Your Excellency, Okezie Ikpeazu, Governor of Abia State, for your support to this project from the Federal Ministry of Power, Works and Housing. Thanks for your cooperation; without your cooperation, our work would not have been smooth.

“You have demonstrated that with the common good as our vision and objective, a lot can be achieved irrespective of our party differences and constitutional limitations.“Your Excellency has no political colour. I was elected for office on the convincing arguments that my party made about my commitment to security, developing the economy and fighting corruption.

“To all the traders, businessmen and women in this market, I say well done for contributing to national productivity and job creation. I am sure that now we are here you would experience better days and prosperity in this market in order to provide support to more businesses in pursuit of economic growth”, Buhari said.

Also, Minister of Power, Works and Housing, Mr. Babatunde Fashola, commended Governor Ikpeazu, saying, “Mr. President, There was one man who stood by us; he is Governor Ikpeazu. All we needed was a phone call and he said ‘I would provide the land’, and he provided us this land. He promised to repair the Ariaria road, and he has done it.

“There was also another man who supported us, Engr. Barth Nnaji. So, I want to publicly acknowledge them for their sacrifice and it shows that if our common good is a collective goal, politics means nothing.”

In his response, Ikpeazu said: “Today is perhaps one of the happiest days of my life since 2015. It became clear to us that our strategy to develop Abia has to take a bearing on two things; one the things that our people can do very well and, two, take advantage of the policies of the federal government. So, we decided to study the problems of Ariaria International market not only for being the hub of Trade and Commerce in the African sub region, but also because it is a center to the manufacturing of shoes and garments and all kinds of manufacturing of leather products.”

“The World Bank recognises Abia as the place that has over 200,000 people doing all kinds of things and we know that each and everyone of them multiplied we have nearly 1 million people doing all kinds of things and most of them are located around Ariaria Market here. So, we noticed that some of the major problems were dependent on energy, building stores; some of them apart from road infrastructure were power, market shares, while the other one was automation and, of course, I want to acknowledge the support and the presence of the Vice President whom you sent on two different occasions to undergo SME clinics.”

“We brought Ndi Aba face to face with the agencies that were responsible for budget and as well as got encouraged for us to begin the construction of this road.

“This Faulks Road, 20 years ago, nobody would imagine that it was possible to access Ariaria end to end. Beneath this road is six and half kilometers of underground drainage, with two pumps, pumping flood water from Ifeobara to Waterside that is the reach of the architectural endeavour that supports the efforts of the federal government.

“I am happy to say that when this option came for power to be provided in this very beautiful way, we all rallied around and said we must do the needful to give ndi Aba the option of which power constitutes a major part of, and of course, this is far better than whatever they had before now and I am happy to say that Aba is now one of the key areas where we have uninterrupted power supply for at least a few shops in this market for more than two years now and with opportunities to scale up and impact the desires of the federal government.

Buhari who said the initiative was in pursuit of his campaign promise on economy, added that the project was initiated to help businesses attain self-sufficiency and ensure ease of doing business through the provision of power supply.

According to him, a notable market, which supplies finished goods to other countries such as The Gambia, Cameroun and Central African Republic, deserved reliable power supply, which he said was critical to ease of doing business.

The president, who described the project as a milestone, added that whereas traders in the market used to have only four hours of power supply with arbitrary bill, they could now enjoy uninterrupted power supply.

He said with such investment in power projects in different parts of the country, the Nigerian economy was gradually being moved away from rent.

“I am pleased to be here today at the milestone connection of 4,000 shops that now have dedicated power. Being a market that supplies shoes, bags, clothing, trunks and many household accessories to Nigeria, many African countries like Chad, Cameroun, Gambia and Central Africa Republic, reliable power supply is critical for ease of doing business to ensure sustainability and improvement.

“I am told that before this intervention, traders in the market only got four hours a day of electricity and paid exorbitantly for it, which consequently affected the viability of many businesses. This is the sad legacy we inherited but which we are replacing with an all-day power supply that is cleaner and better for our environment.

“Those who turned their backs on these problems still have the courage to campaign about unemployment and poverty,’’ he said.