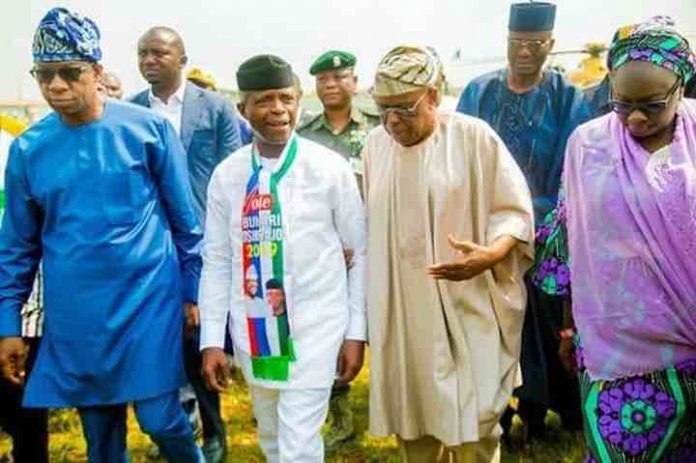 Workers represent an important life wire of any organisation. Consequently, the importance of the workers can’t be over-emphasized. In recognition of this fact, the APC governorship candidate in Ogun State, Prince Dapo Abiodun, has taken his campaign tour to the doorstep of the labour leaders. Accompanied to the NLC secretariat, Abiola Way, Abeokuta, on January 18, by notable party stalwarts, including national leader of the party and former governor of the state, Aremo Olusegun Osoba and Abiodun’s running mate, Mrs Noimot Salako-Oyedele, Abiodun promised to review the cases of the sacked state chairman of the Nigeria Labour Congress (NLC), Comrade Akeem Ambali, along with 15 members and the suspension of 19 Nigerian Union of Teachers (NUT) officials by the state government two years ago.

While addressing various affiliates of the NLC, the APC governorship candidate stated that his administration would not take the issue of Labour lightly but it will form a prominent part of his mission-statement.

“I want to emphasise that our party is a progressive one and it is not a progressive family that will be anti-labour. We will not disappoint you “, said Abiodun.

Stressing his message of inclusiveness for growth, the APC flag bearer further, highlighted the pillars of his administration’s mission which he said no individual, or even a political party, could achieve alone. He noted that, it requires effective engagement and commitment of all stakeholders, including the public service, to achieve hence the central theme of his manifesto: Building Our Future Together.

Abiodun said he was aware of the growing cynicism and disbelief about promises made by political officer seekers, especially in the course of the campaign. “This mistrust is not unexpected given the experiences of Ogun State workers and the electorate in general over the years. However, in addition to personal values that underpin all my endeavours, I always keep at the back of my mind that if my teacher parents had not been treated fairly and with dignity by government of their time, I may not be where it has pleased God to place me today not to talk of vying for the governorship seat of a state. Therefore, I regard my promises as sacred and solemn commitments that must be pursued with sincerity and vigour.”

The APC candidate also paid homage to the Onitori of Itori, in Ewekoro Local Government Area (Ogun Central), on Saturday, January 19, 2019. The elated monarch, Oba AbdulFatai Akorede Akamo, Olu of Itori, admonished other traditional rulers in the local council to ensure their subjects cast their votes for no other political party than the APC.

He said Governor Amosun had done his best but added that Ogun State needs a governor that will perform beyond peoples’ expectations.

In his response, Abiodun assured the people of Itori and Oluke-Orile, both in Ewekoro local government, that Dangote Cement factory will return to the area and commence work.

He said his administration would make life better for the citizens, by giving them dividends of democracy across all the nooks and crannies of the state.

Also, when he took his campaign train to Ijebu-Ode Local Government Area  and Yemoji Local Council Development Area on Monday, January 21, 2019, Abiodun admonished party faithfuls and supporters to be wary of the antics of politicians “who are using the good name of the party to deceive them for their selfish ambition”, just as the forthcoming general elections are approaching.

He said though some selfish political office seekers may have used the good name of APC to get into positions of authority and performed below expectations, he urged that that should not be used as a yardstick to measure all politicians.

While addressing APC members and supporters at Isiwo, in Ijebu-Ode Local Government Area, on Monday, as parts of his ward-to-ward campaign tour of all the 20 local governments, the APC governorship candidate promised that a new dawn was beckoning on all sons and daughters of the state, if he emerged as the next governor.

He said: “Don’t be deceived by some politicians that have gone out on the prowl, knocking at your doors to bring out your Permanent Voter’s Cards (PVCs) to take the numbers on them and then, offer you money.

“And we can’t be in the same party and we will be making the same mistakes. No! It is not possible. These sets of politicians are not real. APC is the party. Broom is the symbol of our party. In all the elections, make sure you cast your votes for the APC.

“I want to use this occasion to reiterate my commitment to ensuring that I bring my vast experience in the private sector to bear in governance if I emerge as the governor of the state.”

At Ikoti, in Yemoji LCDA, the APC governorship candidate promised to ensure that the Olokoola free trade zone becomes a reality if and when he gets into office.

He added that his administration would be business friendly through the provision of an enabling environment where the people of the state can take its economic advantage.

According to Abiodun, the Olokoola deap sea port will be given priority in order to cater for the unemployed youths.

“The economic importance of this project is our priority and when I become governor, I will bring investors to partner with Ogun State Government. And that will have multiplier effects on the state economy. I will make it easy for investors to come and invest in Ogun state- both local and international investors.  I know how to do it, because I come from the private sector.”

Also during the week, it was a matter of who the cap fits. Vice-President Yemi Osinbajo (SAN), an illustrious son of Remoland, took no one by surprise as he led the campaign tour of Abiodun to all the three local governments that make up Remoland. Shortly after paying homage to Remo traditional rulers in 33 communities led by the Akarigbo and Paramount ruler of the Kingdom,  Oba Babatunde Ajayi, the VP campaigned for Abiodun in Sagamu, Ikenne, Ilishan, Isara, Iperu, Ode-Remo, Ogere and other adjourning communities.

Speaking Wednesday, at a town hall meeting organised by the sons and daughters of Remoland at the Akarigbo’s Palace in Sagamu, Osoba, called for total support for Abiodun.

Spokesperson, Remoland sons and daughters, Otunba Adeleke Adeshina, said: “Three local governments that make up Remoland under the leadership of the Akarigbo, 33 towns being represented by their respective Obas, professionals and all business communities have put this town hall meeting together for the cause of our son, Osinbajo.