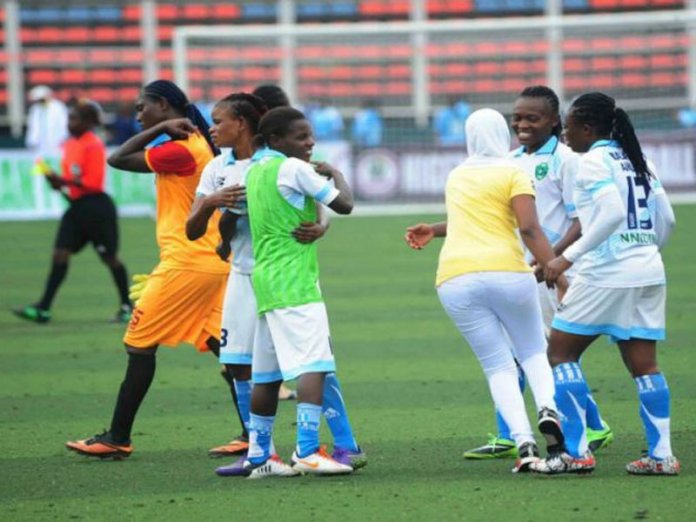 It will be outright fireworks Friday in Lagos among the four best teams in the land at the kick-off of the 2018 Nigeria Women Premier League (NWPL) Super 4 play offs at the Agege Stadium ‘Soccer Temple’ in Lagos.

The biggest prize at stake as always will be who takes home the coveted trophy of the 2017/18 Nigeria Women Premier League (NWPL).

The title has been resident in Lafia for the past one season courtesy of the City’s premier league side, Nasarawa Amazons’ triumph at the 2017 edition of the football showpiece in Benin City, Edo state.

The Al-Makura Girls are very much in the race to defence their hard earned title against equally ambitious sides, Bayelsa Queens, Sunshine Queens and multiple champions, Rivers Angels.

The quartet know each other inside out and that in its itself naturally elicit the type of fireworks, frills and thrills that await the fans who will troop out enmasse to savour the best of women football in the land.

Unlike the immediate past edition of the annual football fiesta which was designed to be round robin the 2018 version is a straight knockout that takes the winners automatically to the final to be decided on Sunday, January 27 at same venue – Agege Stadium.

None of the teams has hidden their innermost interest to be the newest winner including the reigning champions, Nasarawa Amazons. You just have to be abreast of their individual build-up to the competition as well as the quality of players each of them is bringing to the party to agree rightly that perhaps for the first time the best of bookmakers will find it truly tough a task to firm their hands on the possible winner of the competition.

Of course, we know for certain that at the end of the four-day football extravaganza a winner will emerge among the four and the trophy will reside in one of the cities for the next one year.

Bullish as always the head coach of Nasarawa Amazons, Chris Danjuma was blunt when he said his side are here in Lagos to successfully defend the NWPL title they won the last time in Benin City, Edo state.

“The 2018 Nigeria Women Premier League (NWPL) Super 4 title will return back to Lafia at the end of the days’ proceedings.

“Nasarawa Amazons are the defending champions of the Nigerian women topflight and we are coming to Lagos to show our stuff aimed at retaining the title.

“People are already expressing deep worries over our ability to defend the title due to the absence of our two key players, Anam Imo and Amarachi Okoronkwo.

“Yes, the two players were key members of the team and quite useful to the team’s past achievements.

“We will certainly feel their absence at the NWPL Super 4 no doubt about it but nobody is indispensable. I’m confident their absence will not hinder us from retaining the league crown,” said the former Nigerian coach to NWFL Media.