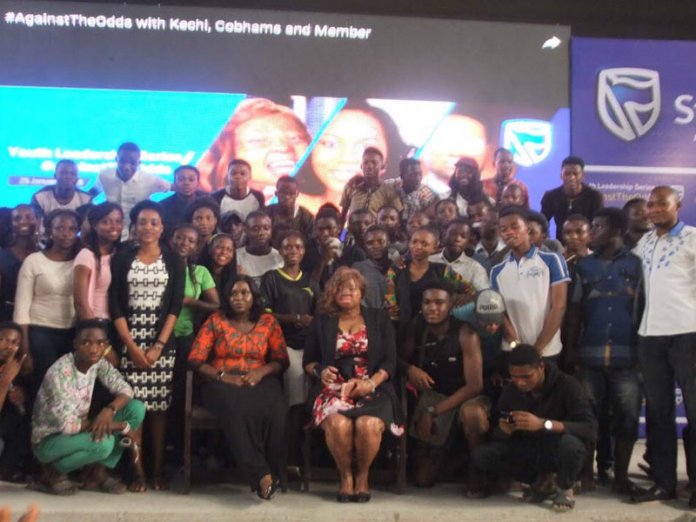 Sunday Ehigiator writes that the Youth Leadership Series of Stanbic IBTC was patterned as a platform of engagement where knowledge and experience are shared among the youths, and mentorship and guidance are provided

As part of its youth-centricity, Stanbic IBTC has over the years courted and supported the youth segment through exposure, sponsorships and financial support. It established the Stanbic IBTC Blue (Innovation) Lab in Yaba, Lagos, last year to support techpreneurs and financial technology firms, and to collaborate, empower and partner with startups in promoting technological development.

A similar thinking underscored the group’s yearly sponsorship of the social media week, and the Higher Institution Football League started last year. The Stanbic IBTC Business Leadership Series (SBLS), after which the Youth Leadership Series (YLS) is patterned, consistently featured young people, such as South African rocket scientist, motivational speaker and innovator Siyabulela Xusa, who was 25 years in 2015 when he headlined the SBLS, and Vusi Thembekwayo, an entrepreneur and business speaker, at 28 when he featured on SBLS. Stanbic IBTC was a sponsor of TechCabal Battlefield in 2014, a showcase of technology startups promoted by young budding entrepreneurs, among many other youth-centric initiatives.

Youth Leadership
In the continuing quest for deeper engagement with the youth, the company inaugurated the Stanbic IBTC Youth Leadership Series (SYLS) in 2018. The SYLS, according to the Chief Executive, Stanbic IBTC Holdings PLC, Mr. Yinka Sanni, is expected to “serve as a yearly platform of engagement for the youth where knowledge and experiences are shared, and mentorship and guidance are provided.”

To kickstart the maiden edition of the series, two young women and a man with very compelling stories were chosen to headline the event, held simultaneously at two venues via live streaming from one venue to enable wider audience participation.

The two female speakers were Kechi Okwuchi and Member Feese, while the man was Cobhams Asuquo an acclaimed songwriter, music producer, music composer and musician. He was born blind but has never allowed the circumstances of his birth to determine the size of his dream or limit his accomplishments.

Cobhams, like renowned blind musicians Stevie Wonder, George Sharing, and Ray Charles, has accomplished so much in music that it is sometimes hard to believe he has such handicap. Okwuchi and Feese had incredulous brushes with death and survived to talk about them and how those experiences helped to define their lives.

Their stories simply defy logic. Okwuchi was on the 2005 Sosoliso flight that crash landed and exploded at the Port Harcourt Airport. She was one of only two surviving passengers of the 109 on board the ill-fated aircraft. According to Okwuchi, she underwent over a 100 surgeries, including skin grafts, since the crash. But through the anguish, loneliness and trauma of the live changing experience, Okwuchi bagged a first class honours degree in Economics from the University of St Thomas, United States and was last year studying for her MBA also in Economics.

In August 2011, Feese was unfortunate to be in the United Nations building in Abuja where she had gone to gather information for her Master’s degree dissertation when a vehicle laden with bombs was rammed into the building by Boko Haram insurgents. The bomb claimed 21 lives and close to a hundred critically injured. Feese was among the critically injured. She lost a leg to the blast and was in a coma for about four months. She required a team of 20 specialist doctors working on her for months to save her life. Less than two years after the bomb, Member completed her dissertation and graduated from the Institute of Developmental Studies (IDS) in the United Kingdom.

The event was Stanbic IBTC’s attempt to show young Nigerians the indomitable spirit and resilience of humans in a way to energise them and ensure they remain focused, disciplined, committed, industrious, and motivated as they journey through life while exploiting their talents creatively, life’s obstacles notwithstanding. The underlying message of the 2018 youth series was clearly that the individual is the only obstacle to his/her greatness.

Strength in Ability
A common thread with Okwuchi, Feese and Cobhams is their ability to find that inner strength so often missing in many, especially when faced with a challenge. Focus, hard work, learning, trust, and a strong desire to be relevant are key attributes that define the trio. These attributes, as well as integrity, partnerships, and humanity, are cherished by Stanbic IBTC and the financial institution had hoped to project and instill in the youth through the series.

2019 Summit
Sanni said the organisation is constantly exploring innovative ways of expanding the scope of its coverage and focus on the youth segment, given the importance of the demography to national development, entrepreneurship, economic growth and development of the nation.

In line with that thinking, the 2019 edition of the series, which was announced to take place in February, will equally feature accomplished young individuals in diverse fields of endeavour.

The three headliners for this year’s event are: Kemi Adetiba, filmmaker and music video/television director; Onyeka Akumah of FarmCrowdy, innovator, agriculturist, and entrepreneur; and Abisoye Akinfolarin, programmer and software expert of the girl coding fame and a CNN Heroes award nominee.

Kemi Adetiba’s latest movie King of Boys, released late last year, reportedly grossed a tidy N200 million in the first seven weeks of release. That is quite outstanding for someone who released her first feature film, The Wedding Party, a short three years ago. Kemi is well versed in the entertainment industry, having journeyed across several segments of the industry from that early exposure when she featured, as a little girl, in the detergent brand Superblue OMO television commercials.

Professionally, she cut her teeth as an on air personality with Rhythm 93.7 FM, presenting shows like Soul’d Out and Sunday at the Seaside. From radio, she switched to televisionwhere she produced and presented such shows as Temptation Nigeria and Studio 53 on Mnet. From that she then trained to direct films and has produced two blockbusters already. She has won several awards and commendations for her efforts.

Onyeka Akumah, founder of FarmCrowdy, a digital agriculture platform which is “connecting farm sponsors with real farmers in order to increase food production while promoting youth participation in agriculture,” was named one of Africa’s 30 Innovators 2018 in the latest Quartz list.

The African Youth Forum in Egypt mentioned him as one of the Top 20 Young Entrepreneurs to Watch in Africa. Indeed, Onyeka has a very rich CV for someone so young. He was the E-Marketing Coordinator for Deloitte for West, East and Central Africa, Webmaster for British Council in Nigeria, Vice President, Marketing, Konga, and Director of Marketing & Partnerships, Jumia, among many other executive roles in well known organisations. Through FarmCrowdy, and by fusing technology with agriculture, he continues to empower thousands of farmers.

The first thing you notice about this brilliant lady is her disarming toothy smile. Abisoye, who has a degree in Business Administration from the University of Lagos, last year was named a ‘CNN Hero of the Year’, an initiative by CNN to honour 10 deserving individuals across the world who have done something unusual but worthwhile in their societies to impact lives. Abisoye certainly deserves the award.

In 2012, she founded an NGO, the Pearls Africa Youth Foundation, to help bridge the technology and educational needs of girls in disadvantaged areas. The foundation trains girls on coding, among other trainings.

“Through the experiences and achievements of these extraordinary young people, we hope to inspire, motivate and provoke the can-do spirit of our youth community and imbue them with the strength of character and doggedness to never give up but to constantly aspire to attain their full potential in life,” Sanni stated.

Passion
Over the past five years, Stanbic IBTC has been bullish in its ambition to achieve end-to-end digitisation covering front-end and back-end processes. The rationale is simple: better process integration will help deliver great customer experiences, improve operational efficiency and ensure cost optimisation for the entire organisation.

The financial institution has equally shown great passion, in that period, to institute deeper engagements with the youth, who make up an estimated 75 per cent of the Nigerian population and who are the digital natives.

Last year, it deployed BlueBots, robots, to drive various dimensions of its operations such as facilitating account origination and servicing for Anti-Money Laundering, AML, transactions and processing and clearing for inward cheque confirmation.

Helen Adebayo: Social Media Has Played a Huge Role in Our Success Stories