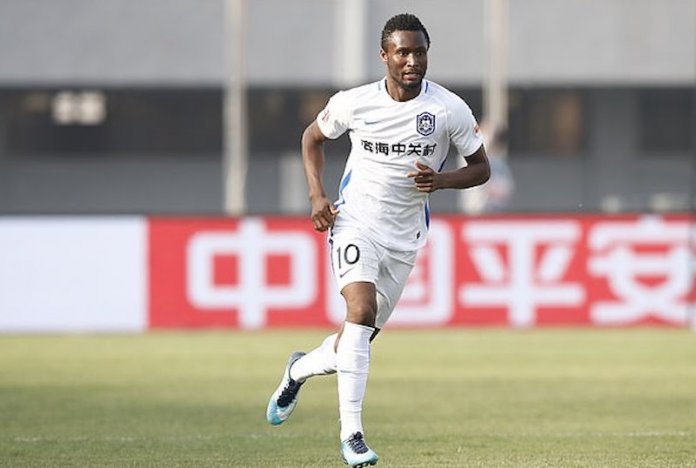 According to UK’s Sun, the former Chelsea midfielder, 31, travelled from London to the north-east yesterday after agreeing personal terms.

Two-time Premier League winner Mikel will join up with his new team-mates this morning after spending the past two years at Tianjin TEDA in the Chinese Super League.

Even with a year left in his contract with the Chinese team, the Nigerian captain was not ready for life in the lower league in the Far East but would rather play in the Championship in England. He parted ways with TEDA on mutual consent.

Roma and Wolfsburg are two other European teams that showed interest in the midfielder who spent over a decade at Chelsea’s Stamford Bridge.

Mikel is believed to have weighed the option of a return to England because his wife and two young children are based there.

The UEFA Champions League winner will be part of a Tony Pulis side looking to bring Premier League football back to the Riverside next season.

Pulis’ men host Newport County on Saturday in their fourth round FA Cup clash before travelling to promotion rivals West Brom on February 2. Boro isn’t short of central midfielders but Pulis believes the physical, imposing and experienced Mikel can further strengthen the department. Mikel has played as both a holding midfielder and in a more advanced No.10 role for both club and country in the past.

He left Chelsea for Tianjin Teda two years ago but didn’t settle in China and still believes he’s got plenty to offer in a challenging and competitive division, while accepting English clubs won’t be able to offer anywhere near the lucrative salary he was earning in Asia.

Mikel hasn’t played for Nigeria since last summer’s World Cup but is being urged to return to the national scene ahead of this summer’s African Cup of Nations.

Mikel’s Coach at both the Under-20 World Cup and the Rio Olympic Dream Team, Samson Siasia said yesterday that the gangling midfielder wants to get back to proper fitness before the AFCON 2019 in Egypt.

“One thing we should know is that Mikel has not played for a while now, and he is trying to move to another club. I believe he wants to secure his job situation before he will worry about the Super Eagles.”

Mikel has vast experience of the English game, having played more than 350 games for Chelsea during his 11-year stay at Stamford Bridge.

He has quite the CV, having won two Premier League titles, three FA Cups, the League Cup, Champions League and Europa League.