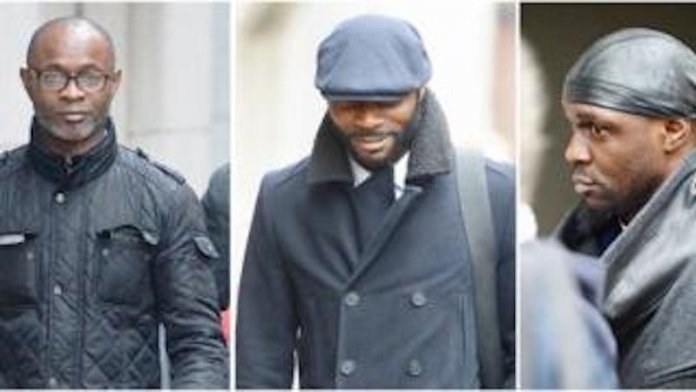 Former Super Eagles defender, Efe Sodje, 46, and his brothers, Stephen Sodje, 43, and ex-rugby player Bright Sodje, 52, were found guilty and jailed for the fraud in 2017.
According to British judicial authorities, the case can only be reported now following the conclusion of a separate trial involving the former Reading and Nigeria footballer Sam Sodje, 39.

Earlier yesterday, he was cleared at the Old Bailey of money laundering. But it was a case of sporting family siphoned off cash from their own charity set up to help African children.

The fraud trial in 2017 had heard how the family set up the Sodje Sports Foundation (SSF) in 2009, ostensibly to help provide facilities in Nigeria.

However, cash raised at black-tie dinners, auctions, charity football matches and a clay pigeon shoot went into Sodje bank accounts, prosecutor Julian Christopher QC said.
In once instance, in 2011, there was a gala dinner at the Lowry Hotel in Manchester for the SSF and the Royal Manchester Children’s Hospital.

The £150-a-head black-tie event raised almost £11,500, but Mr Christopher said “not a penny” went to the hospital.
Judge Michael Topolski QC told the defendants: “You have brought shame upon yourselves and your family.”

He said “at least £63,000 can be shown to have been received by the fund”, and added that this did not include cash donations.
The defendants “went out of their way” to ensure that proper records were not kept, he said.

Any good works done in the past would be “forever tainted by their dishonest and disreputable conduct”, he added.
Stephen Sodje, of Bexley, was sentenced to two years and six months in prison for receiving £30,000 in charity funds.

Efe Sodje, of Cheadle in Greater Manchester, who was “the face” of the charity, was given 18 months in jail for receiving £7,500 from the SSF and an unknown amount from a clay pigeon shooting event.

Bright Sodje, of Sale in Greater Manchester, was jailed for 21 months for receiving £3,000 from the charity and signing cheques to other family members totalling £18,000.
The Charity Commission worked with the National Crime Agency to secure the prosecution.

Tracy Howarth, the commission’s head of regulatory compliance, said the defendants had “misused their privileged position to exploit donors and supporters, and their financial gain came at the expense of the children and causes the charity was supposed to support”.

She added: “The outcome of this case sends a strong message that the deliberate, wilful and cynical abuse of charity for private financial gain will be investigated and will not go unpunished.”

Reporting restrictions meant the brothers’ convictions could only be reported following the conclusion of the separate money-laundering case.
Efe Sodje was cleared of money laundering at the Old Bailey in January 2018 but Emmanuel Ehikhamen, 53, of south-east London, and Andrew Oruma, 50, of Bexley, south London, were convicted.

The case against Sam Sodje collapsed and his retrial began on 7 January 2019.
Mr Sodje, who also played for Charlton Athletic, Brentford and Leeds United during his career, was charged with four counts of taking part in a fraud in which bank accounts were used to channel money from companies around the world.

He was found not guilty of two of the charges on 14 January and cleared of the remaining two counts earlier yesterday.
Another of the brothers, Akpo Sodje, 37, moved to Dubai and refused to return to Britain for questioning.