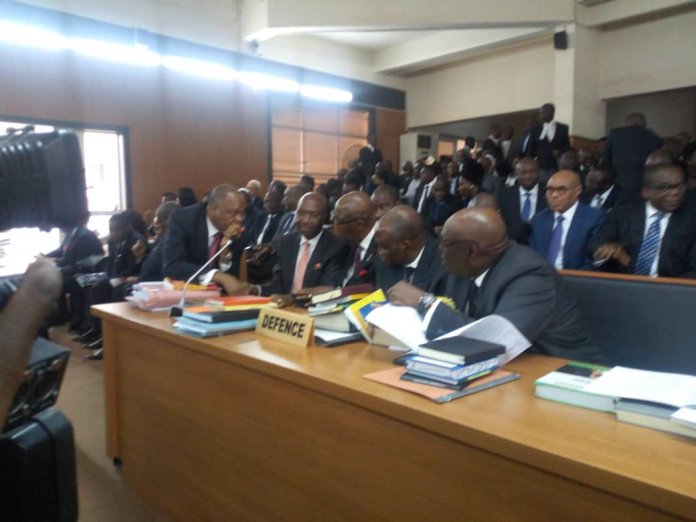 By Alexander Enumah in Abuja

Proceedings commenced at the Code of Conduct Tribunal Abuja on Tuesday with the Chief Justice of Nigera, Justice Walter Onneghen, conspicuously absent for the second time.

When proceedings commenced at about 10.21am, Chief Wole Olanipekun SAN, 42 other senior advocates and 40 lawyers announced their appearance for the defendant.

The federal government had filed a 6 count criminal charge bordering on failure to declare his assets against the CJN.

Onnoghen was scheduled for arraignment last week, January 14 but the arraignment could not take place due to improper service of the charge on the CJN, forcing the tribunal to adjourn till today.

Onnoghen, citing improper service was not present in court on January 14, the earlier scheduled date for his arraignment.

But in the last one week, three different courts and the National Industrial Court, Abuja had given orders restraining the CCT from going ahead with the trial.

Only on Monday, the industrial court in restating its order against the trial pending the determination of a suit seeking to stop the forceful removal of Onnoghen from office directed service of hearing notice on the Chairman of the CCT through substituted service.

This morning, the hearing notice as well as the enroll order of the National Industrial Court was seen pasted at the gate and walls of the tribunal.

Security is tight at the venue as a combined team of the Nigeria Police Force and the Department of State Services (DSS) has taken over security within and outside the CCT complex.