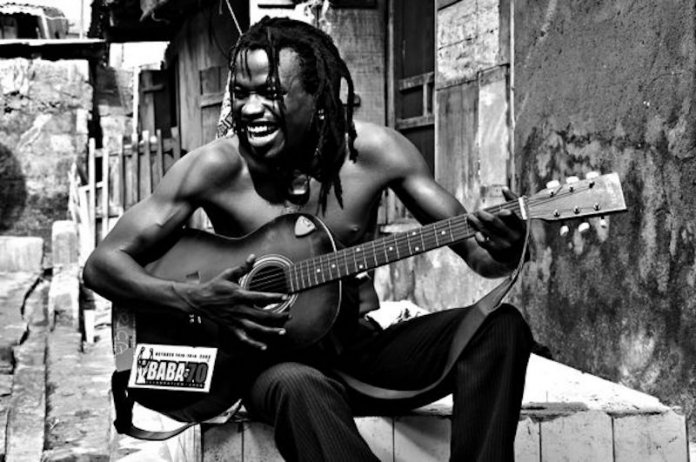 At a group photography exhibition at Goethe-Institut Lagos, his works stood out. Aderemi Adegbite, with a knack for manipulating images to tell a captivating visual story has experiences that form great assets in his creative expressions. From his days as a theatre artist with the Legendaire Theatre Company, he had learned a vital lesson that some individuals spend their entire career life to finally discover, which is to be “a good stagehand is better than being a sloppy stage actor”.

A stagehand is anyone who helps in removing and placing props on stage before and after a scene in a production. It is regarded as a very humble task, far below the role of an actor. Members of the audience don’t really care to know who the stage hand is as they have come to watch the actors at a show. A stagehand’s role requires being attentive to all the cues as well as identifying what can cause potential stage accidents and removing them. But no professional comes to the theatre with the goal of being a stage hand, certainly not Aderemi Adegbite.

But he did while working with the dramatist and theatre director, Lekan Balogun, which prepared him for his role as culture project manager. Once, he worked as an assistant to Jahman Anikulapo, an ace journalist and culture advocate during a poetry festival called “Wordslam’’.

“I remember having an issue with a difficult reggae musician during Wordslam,’’ he recalled. “I called Jahman Anikulapo, the executive producer of the project to inform him of the situation, he said, ‘Remi, it’s your show, you must know how to deal with every artist. Be calm when they are angry.’ It’s about paying attention to details when I was with Prof. Awam Amkpa. The knowledge acquired during my internships at various intervals with my mentors cannot be quantified. I was treated like a son, a brother and sometimes, a colleague. They did not only show me ropes; they also taught me about life as well.”
Although, the interdisciplinary artist is known for his photography, video art and other forms today, he had worked with artists like Sage Hassan and Ade Bantu before an internship with the legendary playwright, Ben Tomoloju.

“Even though I had had a career switch from being a cultural producer to photographer before I met Prof. Awam Amkpa in 2011 or there about, it was he who mentored me on being a good visual narrator,’’ he recalled.

As a curatorial assistant to Prof. Awam on the travelling photography exhibition, titled, “Africa See You, See Me,” he understudied his for more than two years; learning more styles and framing patterns from the works of 37 photographers, who participated in the exhibition. Other studio artists that he had assisted include Pamela Udoka, Peju Alatise and Ndidi Dike whom he described as “no-nonsense women”.

His photography work, titled “Time out” treats the subject of depression, one that he knows personally thus explaining the psychotherapeutic nature of some of his works.
“‘Time out’ was a series I created after being part of a few workshops at the Nlele Institut. It was first shown at the first ever Lagos Open Range at the Goethe-Institut, Lagos so you are right about seeing the work there.”
Prior to that show, he had suffered from depression for two months before he was diagnosed. And it was a real struggle in the midst of friends and colleagues from mid-2014 and mid-2015. He tried to blame others for it.

“What I remember vividly was that it started from family pressure to personal ambitions that were taunted by lack of resources and opportunities. I realised that I was in a mess that I needed to deliver myself from. Only then did I started looking into my family history and saw a particular pattern in both my paternal and maternal families. Luckily for me, my uncle’s family albums were in my care, and I began to ask more questions from my mum about her brother’s early life, his relationship with family and friends and also about my dad. For them, it was one for all, all for one. Time out was what eventually came out of that process of questioning and self-realisation. Some photographs from the album were used to make digital-collages, which served as psychotherapy for me. In all the images, I was seen departing from the image behind me, which is a way of saying I don’t want to be like you or live my life like yours. Most of the photographic works I created during that period played a strong role in giving me Time out from depression.”

Adegbite resolved his frustration and emotional issues by dissecting his family history. By late 2015, he created “Al-Ikhlas: The Purity/ The Refining” in Yogyakarta, Indonesia – the country with the largest congregations of Muslims – using different family albums and history. The collages were printed on Islamic slates to signify that humans are firstly spiritual beings before operating in the physical and was shown at Jogja Biennale.

“I was struggling with my faith. I wanted to reconnect with my Islamic background and also understand the country’s cultural influence on the religion, which was the reason why I decided to create the work,” he explained. “The slate signifies a space of knowledge and spirituality.”

From a place of unfulfilled dreams to a voice in the international community, Adegbite founded Iwaya Community Art Festival (ICAF Lagos), an annual community-based international art festival, a project of Vernacular Art-space Laboratory in 2016. The project, was conceived to challenge the notion of art in the ‘white cube’ through the extensive use of public spaces, as well as alternative and abandoned spaces around Iwaya/Makoko community so that contemporary art can be accessible to those who cannot afford to go to the galleries and museum(s) or are constantly excluded from contemporary art discourse.
After two years, Adegbite decidedly sought to address domestic issues in an inclusive engagement with both indigenous and foreign artists.

“Communal Re-Imagination as the theme of the third edition of I C A F Lagos was adapted from the year-long (2018/2019) alternative community art school project funded by Prince Claus Fund as part of its Next Generation project, in Iwaya Community. Without the festival, the funding which was given for the alternative art school in the community, might not have been possible,” he disclosed.

One challenge with digital art forms is that there is still a disconnect between the collectors and the art form. Some Nigerian collectors are sticklers for portraits and landscape paintings, at the detriment of installation and interactive works. A case in point was the alarming distance between the winning work at ART X 2018 and the viewers. Bolatito Aderemi-Ibitola, the winner, had made a conscious effort to explain the piece to bystanders at the international art fair, encouraging them to move closer to the work for their fabric patterns to be replicated on screen.

Adegbite remarked that while some collectors are only interested only in digital, video art and photography, some don’t see photography as an art form, adding that a collaborative project for art forms will take a positive turn on the visual art space.
“Some will rather ask commercial photographers to make 5000 photos of cultural events for their collection at the rate of N5,000 and possibly, a token for transportation. Swizz Beatz and Alicia Keys spent hundreds of thousands of dollars to acquire less than 100 photographs of Gordon Parks for their ‘The Dean Collection’. Our musicians would do themselves a lot of good by supporting visual art.”

Recently, it was widely reported that the Louvre Museum in Paris had a record-breaking 10.2 million visitors in 2018 after hip-hop legend Jay Z and wife Beyonce rented the entire museum for the “Apesh*t’’ music video. That is the power of collaboration.
Adegbite argued further that it is not the business of an artist to sell his works but gallery owners. For him, art advisors should act as the intermediary between artists and collectors so that artists can focus on their creativity.

Asides writing and watching films in fiction and documentary genres, Adegbite watches the contemporary art scene and his vision is to see a contemporary art museum, more studio spaces and alternative exhibition and residency spaces for young artists to explore.

“After structural infrastructure, we should put in place a funding structure that will help the creations of artists come to life,” he said. “This funding could come inform of competitions. Turner Prize played a major role in the contemporary art history of the UK.”

He recalled how a commercial bank in Nigeria funded Tate Modern Museum in London some years ago but is yet to institute such funding for visual art in the country.
As part of the community art festival, in 2017, his team started an artist-in-residence programme. Since then, they have invited 12 international and two indigenous artists. In 2018, one of the African artists invited for the residency was funded by Art Moves Africa (AMA) travel grant.
“We hope that we will have more participation by African artists because our interest is on the artistic exchange within the continent,” he said.