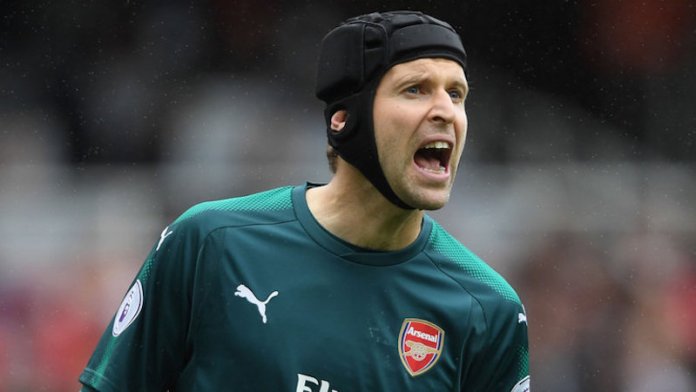 Arsenal keeper Petr Cech will retire at the end of the season. The 36-year-old joined Arsenal in June 2015 from the London rivals Chelsea, where he spent 11 years.

“Having played 15 years in the Premier League and won every single trophy possible, I feel like I have achieved everything I set out to achieve,” said the ex-Czech Republic international.

“I will continue to work hard at Arsenal to hopefully win one more trophy this season.”

Cech’s career was in doubt in October 2006 when he required surgery for a skull fracture after a collision with Reading’s Stephen Hunt.

The keeper was out for three months and has since worn a protective head-guard during games.

He added: “This is my 20th season as a professional player and it has been 20 years since I signed my first professional contract, so it feels like the right time to announce that I will retire.

“I am looking forward to seeing what life holds for me off the pitch.”

Cech arrived in England when he was signed by Chelsea from French club Rennes in July 2004.

He went on to win 13 trophies with the Stamford Bridge club, including one Champions League and four Premier League titles.

He also set a club record of 228 clean sheets in all competitions, beating the previous mark of 208 set by former England international Peter Bonetti between 1960 and 1979.

Cech eventually lost his place to Belgian Thibaut Courtois before joining Arsenal and helping the Gunners win the FA Cup in 2017.

“For your consummate professionalism, for being the perfect role model, for the 50 clean sheets, for your honesty, your integrity and for your inspiring work with the Arsenal Foundation, we want to say – thank you Petr Cech,” tweeted Arsenal.

In a statement on their website, the club added: “Petr recently informed us of his decision. Like all football fans, we are sad about this, but completely understand and support Petr.”

“A champion on and off the pitch,” said a message from Chelsea. “Enjoy your retirement.”

The Czech goalkeeper was part of the spine of Chelsea’s golden years under the likes of Jose Mourinho, Carlo Ancelotti and then most spectacularly of all when, with interim manager Roberto di Matteo in charge, he was the hero of the Champions League final win against Bayern Munich on penalties in their own Allianz Arena in 2012.