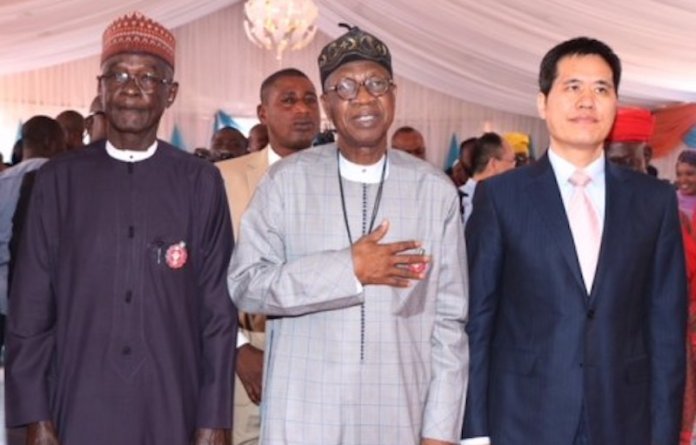 The scheme will ensure that no fewer than 1,000 villages in Nigeria benefit from the project, an initiative which could help the country meet the International Telecommunications Union (ITU)’s demand for African countries to achieve digital migration of TV industry before 2020.

Speaking at the launch of the project in Kpaduma village, a suburb of the Federal Capital Territory (FCT), Abuja, Minister of Information and Culture, Alhaji Lai Mohammed, said the project would undoubtedly strengthen the cordial China-Nigeria relations and complement ongoing efforts by the President Muhammadu Buhari-led administration to democratise access to information and entertainment in the country.
According to him: “The project would be an eye-opener to the villagers, many of whom prior to now have not had access to satellite TV or an opportunity to see the world beyond.”

He said the 1,000 villages project could not have come at a better time as “In just a little over one month, Nigerians will be voting in the 2019 general elections.
They need access to information now, more than at any other time, to know about the over 70 political parties that will be participating in the elections as well as about their various candidates.”

The minister, therefore, urged the implementing agency of the project-StarTimes- to expedite the installation of the satellite TV systems in
the selected villages ahead of the elections.

“This will no doubt go a long way in making it easier for Nigerians to make the right choice of candidates to vote for during the elections. In addition, access to information will no doubt have a positive effect on the lives of people in our rural communities. After all, it is said that information is power,” he noted.

The Chinese Ambassador to Nigeria, Zhou Pingjian, also expressed China’s willingness to continue to bring projects that will better the lot of Nigerians and Africans at large, assuring that the friendship between China and Nigeria will be preserved through infrastructural projects that will uplift the people of the local communities who need it the most.

Also speaking at the occasion, Chief Executive, StarTimes Nigeria, Justin Zhang noted explained that the comp was contracted by the Chinese government to deliver on the project across the continent, adding that no fewer than 1,000 villages in Nigeria will benefit from the project.

He said:“We have entered an advanced stage in the installation of satellite TV access to 1,000 Villages in Nigeria. The villages identified for this project will receive two solar power projector TVs for the community, digital TV sets, 20 Satellite dish and decoders where they can watch more than 100 international and local channels all free of charge, just as we have done in Kpaduma village.

He also said jobs have been created in the course of the project implementation while many Nigerians from various villages have been trained on how to recharge, operate and provide the required maintenance support for all the products installed-and planned to make some of them dealers going forward.
Zhang said:”Today, with more than four million subscribers nationwide and more than 10 million users of our StarTimes on mobile App, StarTimes can be watched in every Nigerian city including the North East. We believe everyone has the right to access information at very affordable rates.”