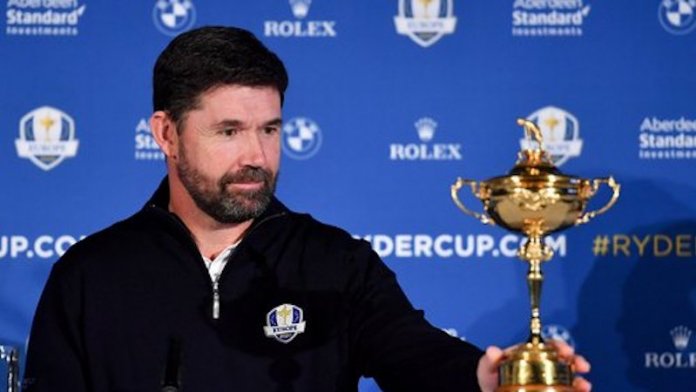 Padraig Harrington will captain Europe when they defend the Ryder Cup at Whistling Straits in the US in 2020.

The Irishman, 47, was a vice-captain when Europe won the trophy back under the leadership of Thomas Bjorn in France in September.

Harrington played in six successive Ryder Cups from 1999 and was on the winning team on four occasions.

“I’ve won three majors in my career but taking the Ryder Cup captaincy is a different level,” he said.

“I want to find an edge to get the players to perform to best of their abilities and hopefully get a win.

“I’m really conscious that I have to find the edge and add to it. It’s going to take a great deal of my time over the next two years to do it.”

The likes of former world number ones Luke Donald and Lee Westwood were mooted as potential captains, though Westwood – who was also a vice-captain under Bjorn – has indicated a preference for taking the role on at the 2022 event in Rome.

“It’s possibly easier to be Ryder Cup captain at home, but I realise it was good timing in my career and probably the best chance for the team in an international setting, going to the US having me as captain at this time.

“I have the support of the players, then it really came down to whether I wanted to be in the hat.

“I’m putting it on the line – we know when you’re a successful Ryder Cup captain it’s great and a losing captain – it’s his fault.”

Harrington, who is currently recovering from a broken wrist, becomes the second man from the Republic of Ireland to take on the captaincy, following Paul McGinley in 2014.

After winning the trophy under McGinley, Europe were well beaten 17-11 under the captaincy of Northern Ireland’s Darren Clarke the last time it was contested in the US in 2016.

But a resounding 17½-10½ success under Bjorn secured a seventh success for Europe in the last nine Ryder Cup events.

The US are yet to name their next captain, with 1992 Masters champion Fred Couples and Steve Stricker – who was born in Wisconsin – among the leading candidates.

Masterminding an away win in the Ryder Cup is one of golf’s toughest assignments. As Europe proved at Le Golf National and the US at Hazeltine, home advantage can make a huge difference.

It makes sense, therefore, for the continent to turn to such a resourceful, committed and intelligent figure as Harrington. There was no one better qualified for leading Europe in their 2020 trophy defence.

The three times major winner commands immense respect among his peers. He is a popular figure with US golf fans, has played all three PGA Championships at Whistling Straits and having served as vice-captain in the last three Ryder Cups is the ideal choice to succeed Thomas Bjorn.