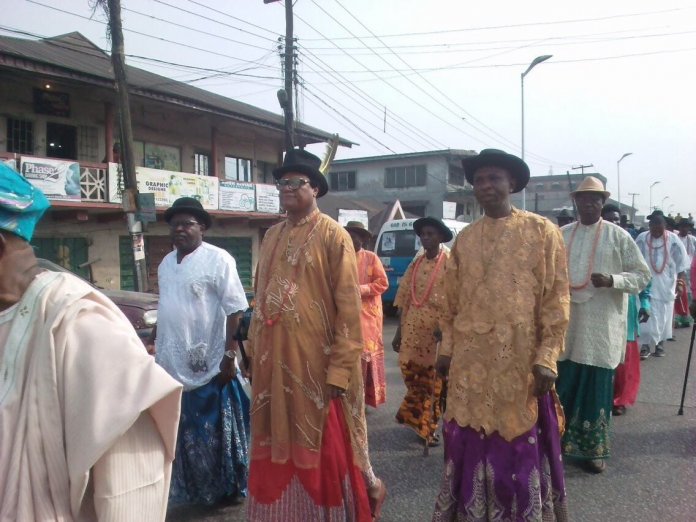 God’s Kingdom Society recently held its annual Christian Feast of Tabernacle in Warri, Delta State. Mary Nnah writes that it was a colourful event as members from 104 branches in seven countries, who graced the occasion were treated to a potpourri of melodious music, traditional dances and preaching

At the annual Feast of Tabernacle of the God’s Kingdom Society (GKS), it’s usually a colourful procession. This year was not different. At the beginning of the programme, from Salem City their voices heralded the good news accompanied by musical accoutrement as the convoy of vehicles trailed the members.

Yearly, each ethnic group parades their unique traditional regalia to blend with their music, weaving every beat with contagious melodies that compels the Warri residents to join in the rhythm. Again, this year was not different.

For this members, this colourful, joyful and melodious procession is one of their demonstrations of faith and allegiance to the Almighty God and His son, Jesus Christ.

The Feast of Tabernacle of the GKS is an annual festival that pierces millions of hearts of members and it continues to mesmerise members from 104 GKSbranches scattered in seven countries, which includes- UK, USA, Canada, Liberia, UAE, Ghana and Nigeria.

This year’s festival was held from December 16 to 24 at the St. Urhobo Square, Salem City, Warri, Delta State.

From all indications, the Christian Feast of Tabernacle was drawn from Leviticus 23, which talked about the institution of the feast by God, in the days of Moses the prophet, during the historic journey of the Israelites from Egypt to Canaan. This ordinance is what these members are implementing.

With the message, ‘Heal me oh Lord and I shall be healed’, from the GKSPresident, Mr. Godwin Ifeacho, the congregation werr brought to terms with the fact that the world today is full of woes and iniquities.

“We see different diseases that are plaguing mankind. Till date, some are incurable”, he lamented.

He however reminded them of one source of lasting healing in Jeremiah chapter 17 vs 14, adding that, “the Bible shows that sin is responsible for the troubles faced today including death. And the troubles of man have multiplied. But look on to God who cures all diseases”.

He said spiritual healing is the panacea to save the world. “Nigeria and the world at large need spiritual healing, salvation and deliverance. We cannot continue in sin and expect grace to be with us. We need to repent,” he added.

Ifeacho found globalisation guilty of paving way for rapid spread of diseases. “Ironically, efforts by scientists, statesmen and philosophers to improve human wellbeing are creating other problems in the world”, he lamented.

Buttressing his point, the president cited the concept of globalisation, the flow of information, goods, capitals and people across political and geographic boundaries as contributing factors. While this is said to help in the alleviation of hunger and poverty, he added that the negative side of it was the increase in the spread of infectious diseases from South to North and increase in the risk of non-communicable diseases by transmission of culture and behaviour from North to South.

He went on to bemoan that Wikipedia paints a more troubling scenario that though “many vaccines and cures have been developed for some of the worst diseases people suffer and because the evolution of disease organism is very rapid, even with vaccines, there is difficulty providing full immunity to many diseases”.

Despite experts’ warning that another influenza pandemic is inevitable, Ifeacho gives a beam of hope for ultimate cure and healing. “It is God Almighty who can save mankind from the deadly situation they have found themselves in as stated in Psalm 103 verse 3”.

While calling on all to repent in order to enjoy the healing God has promised, the preacher enthused, “May God Almighty, who sustains the entire universe, continues to give us knowledge, understanding and faith to look to him at all times so as to be healed of all ailments”.

The Assistant Chairperson, GKSWomen Fellowship Committee, London Branch, Mrs. Oyewo Ogbewo, moulded her words from the topic, ‘Emulating the characters and works of noble women in the Bible’.

According to her, some names that topped the list of nobility from the Bible were: Ruth, Naomi, Abigail, Elizabeth and Rahab as best illustration to drive home her point on the importance of exuding worthy characters whenever they go.

According to her, adapting characters of virtue from the above listed women takes the fear of God. “If you fear God you will eschew evil. It is because there is no fear of God that is why bad things are happening today”.

Clearly, she registered displeasure over women maltreating other women. “What could be the reason for lack of the fear of God especially among women with the way they treat fellow women? Check the way you treat your daughters-in-law and your househelps.”

She further cited the Biblical Sarah and described her as beautiful, yet humble and submissive. “But never let your beauty get to your head. Be obedient, submissive and be a woman of integrity as seen in Genesis 12:11”, she futher charged women.

After harping on the fear of God as the ultimate call to living a righteous life, she bowed out as the crescent-like stage became occupied by the next itinerary ; dancers, who competed to clinch the title for best performance.

While the groups expressed their adulation to God in a blend of cultural display, the angelic choir rendered harmonious interludes that flowed mellifluously.

“The colour you see this year will change next year at the Feast of Tabernacle. We may decide to get a new venue as the population is growing. God is blessing us and we are looking forward to it,” the Vice National Chairman of the People’s Democratic Party (PDP), South-south, Emmanuel Ogidi, said.

He expressed joy over the turnout of people at the feast while calling on Nigerians especially politicians to fear God in all they do. “Election is fast approaching. Leaders and the masses should have the fear of God. We keep talking but people are no longer serving God in truth. But we will keep praying and talking until the people have a change of mind through God’s touch”.

While the guests and members enjoyed the nostalgic moments after the sermons, passers-by spied from across the spider web gates and over the fence. It was to get a first-hand taste of the melodious music festival and the feast.

Truly, eight consecutive days could be lengthy and mind-numbing, but not the Feast of Tabernacles as every moment demanded attention- from the teachings to the electrifying potpourri of music and dance. You will have no choice but to dance your way from the seat to the centre stage. Indeed, it was a happy feast of tabernacle 2018.

Pic: From left, a top management staff with Arise TV Network, Mr. Emanuel Efeni and a Professor of English at the Department of English, University of Lagos, Hope Eghagha, with other GKS members celebrating the Feast of Tabernacle