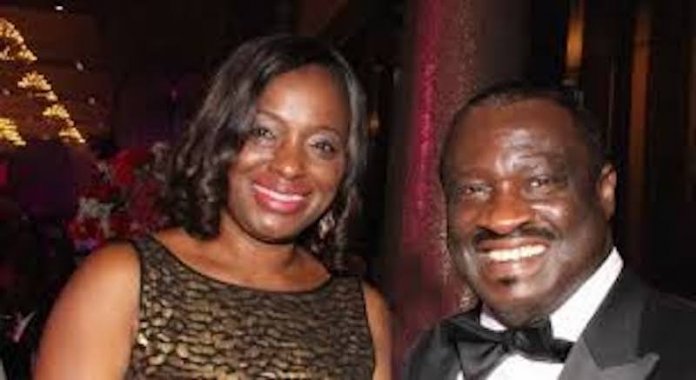 Auto magnate, Tayo Ayeni, was probably content to see no other verdure than his lawn’s on his 56th birthday. He probably wished to feel no other breeze than is blown through his Banana Island, Ikoyi, mansion’s grand alcoves until the d-day. Adetutu, his ravishing wife, shocked him and planned a beautiful party for him.

Their mansion became the masque of high festivity and a pleasant place for rare merriment as the Skymit boss clocked 56 on the 28th December.
At the high-octane birthday party, business associates, friends and family thronged the venue like a flock of sheep responding to the shepherd’s summons in all white attires. Expectedly, of an event of high net worth individuals, there was plenty to eat and drink. The tables heaved with choice food and liquor and the party rocked to music from A-list artistes.

The ambience was lit by glittering Christmas decor thus lifting the spirits of the host and his guests. The event further established the class and elegance of the Ayenis. Findings revealed that every attendee at the soiree couldn’t summon the nerve to leave and head for home as the close of the party. They reportedly got carried away by the treats they were privileged to enjoy courtesy their generous host. Thus Tayo’s private Christmas party at his mansion in Banana Island, manifested as an Eldorado of sort on his loved ones who were privileged to be part of it.

The billionaire business man acknowledged the need to fraternize with loved ones at the end of year’s busy schedule hence his decision to host them to a memorable end of year party and spend quality time with them. Predictably, his family was thrilled and positively animated by his generosity and they minced no words in expressing their heartfelt gratitude to him. For the privileged few who had the opportunity to see the video of the event, it’s probably the best private party in 2018.