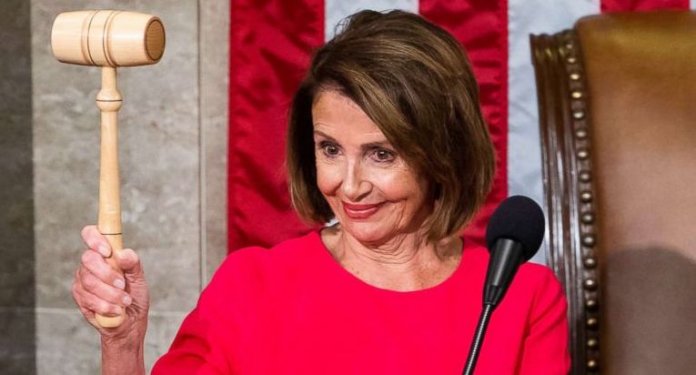 Adeola Akinremi in Washington D.C, writes that in a politics riddled with male chauvinists, the return of Nancy Pelosi as Speaker of the United States Congress and second in line to U.S president makes her a reference point for women who seek to break political ceiling across the globe

The conversation in the United States and around the world shifted effortlessly at mid-day on Thursday, November 3. It shifted from Mr. President to “Madame Speaker” as Nancy D’Alesandro Pelosi, the first and only woman to be elected Speaker of the United States Congress returned to a position she once held for straight eight years between 2007 and 2011.

In a historic comeback, Ms. Pelosi, 78, was elected speaker of the 116th Congress, cementing her legacy and sending a strong message of “you don’t get pushed around” to women everywhere in the world.
As a speaker of the United States Congress, Pelosi, the longtime Democratic leader and daughter of a former mayor of Baltimore, is one of the most well-known women in the world.

For Ms. Pelosi, taking the leadership of the U.S. House of Representatives isn’t the only thing that makes her the most important woman in U.S. politics, the opportunity that the position offers her to be second in line to the presidency is extraordinary.

The U.S Presidential Succession Act makes the speaker of the House of Representatives next in line of succession to a sitting president, right after the vice president.
According to a Senate website on the history of the Presidential Succession Act, the death in office of America’s 32nd president, Franklin Delano Roosevelt, triggered a conversation that placed the speaker of congress in line of succession after the vice president.

So Pelosi knows the importance of her ascension as a woman speaker. The moment she had the gavel extended to her last Thursday, she looked straight into the eyes of other 434 representatives, beamed with sweet smile and said: “I am particularly proud to be the woman Speaker of the House of this Congress, which marks 100 years of women winning the right to vote, as we serve with more than 100 women in the House of Representatives – the highest number in history.”

But 32 years ago, when Ms. Pelosi, a Democratic Representative from California took her seat in Congress, after winning special election to succeed Sala Burton, who gave her the chance in 1987, only a few would agree with her that she was on a mission to break the ceiling. She did.
In 2007, when she was first elected speaker, she said: “It is a historic moment for the Congress and a historic moment for the women of this country. It is a moment for which we have waited over 200 years. For our daughters and granddaughters, today, we have broken the marble ceiling. For our daughters and our granddaughters, the sky is the limit; anything is possible for them.”
Like in all societies, where women are often pushed aside in a male-dominated politics, Ms. Pelosi has been a target of political mudslinging both from the Republican and from her own party, including ads that portrayed her as unflattering and aggressive, but she’s a survivor.

“After she became speaker, conservative media started to speculate about whether she’d had plastic surgery,” according to a narrative posted on history.com
Described as an “Icon of Female Power,” by the New York Times, Pelosi herself was once worried about having too much to herself in terms of power and influence. According to the New York Times, in 1984, when she occupied the position of chairwoman, along with other titles in the California Democratic Party, she confided in Lindy Boggs, a Louisiana congresswoman, about how she was uncomfortable and was finding ways drop some of the titles. But Ms. Boggs advised her against it saying, “‘Darlin’, no man would ever think that. Don’t you give anything up?”
Perhaps, Ms. Pelosi kept the words of Ms. Boggs to heart as she continued to hold powerful positions on Capitol Hill in the last three decades and becoming the first lawmaker in more than half a century to hold the office of speaker twice.

She’s has also made history as one of the two members of the house to be elected at the age of 78 in the history of United States.
The oldest Member to hold the office of Speaker of the House of Representatives before Pelosi was Sam Rayburn of Texas, who was elected Speaker for the 10th and final time at age 78, in 1961.
Once in Washington, Ms. Pelosi carved a niche for herself putting her mouth where her mind is with toughness, focus and legislative skill to champion bills that reflect her liberal politics like Affordable Care Act, reform of Wall Street regulation along with support for a massive economic stimulus for the revival of a collapsing economy in 2008, advocating human rights, seeking funding for health research, HIV/AIDS and other noteworthy issues of governance.

That way, the powerful fundraiser for Democratic Party became a star in the firmament of Democratic Politics, rising through the ranks and adding many firsts to her name.
In 2001, after defeating Representative Steny D. Hoyer of Maryland, Ms. Pelosi was elected Democratic whip, becoming the first woman to hold that post. The following year, she added another first, when she became the first woman to lead a party in Congress as Democrats elected her as leader.

With several accomplishments that make her a go-to person in Democratic politics, several House Democrats, both men and women, gave Pelosi the honor she deserved on the day she took back the gavel by wearing bright and beautiful blue buttons emblazoned with the words “Madame Speaker,” next to their traditional member’s pin.
A journey that began for her as a volunteer for the Democratic Party, Ms. Pelosi learned politics from home listening to her father, who served in Congress and was the mayor of Baltimore for 12 years, and her brother, Thomas, who later served as mayor of Baltimore as well.

“There are two things about what I bring with me from my family in this regard,” Pelosi said. “One is to know how to count. That’s very important. Count your votes to win the election. Count your votes to win a vote on the floor. The other is listen to your constituents,” she told CNN in an interview.
In 1987, when Pelosi got to the House, there were only 24 women serving in Senate and the House together, but now the Congress alone boasts of 102 women, a credit to her for pushing for more women in political leadership and for putting herself forward as an example of excellence for womanhood.

“You know why I do it? I do it, because I want women to see that you do not get pushed around. You don’t run away from the fight,” she said in an interview.
At a time everyone is looking for someone to hold the U.S president Donald Trump accountable, Ms. Pelosi appears stoically ready for the battle ahead. After a recent Oval Office encounter with Trump over border wall, Pelosi reportedly told Democrats during a briefing that Trump’s obsession with building a wall as last solution to illegal immigration is “like a manhood thing for him — as if manhood could ever be associated with him.”

And as the government shutdown goes into overdrive with more than 15 days and thousands of workers furloughed, Pelosi has held on to what majority of Democratic caucus wants: no funding for border wall.
“The president cannot hold public employees hostage because he wants to have a wall that is not effective. A wall is immorality. It is not who we are as a nation. The president is a master of diversion,” Pelosi said in an interview with reporters.

Nancy Pelosi who graduated with a Bachelor of Arts in political science from Trinity College thought of going to law school momentarily before succumbing to the common thing of her era, marriage. She was married to her husband, Paul, who became a banker in New York before they moved to San Francisco to settle down and raising children.

“Even when she was pushing strollers, Ms. Pelosi said, she was active in Democratic politics and pushing her own children to get involved,” New York Times reported.
Unapologetic about her ambition, Pelosi according to a CNN report had planned to step down, if Hillary Clinton had become president. However, when Clinton lost, Pelosi says she felt there was need to stay on so that a woman can remain at the table, where decisions are made at high-level meetings.

For her determination and conscientiousness, even her political adversary, President Trump, gave his words of commendation to Pelosi. After a Democratic wave that roundly defeated Republicans during the mid-term election, Trump said: “I gave her a lot of credit. She works very hard and she’s worked long and hard… I give her a great deal of credit for how she’s worked and what she’s accomplished.”