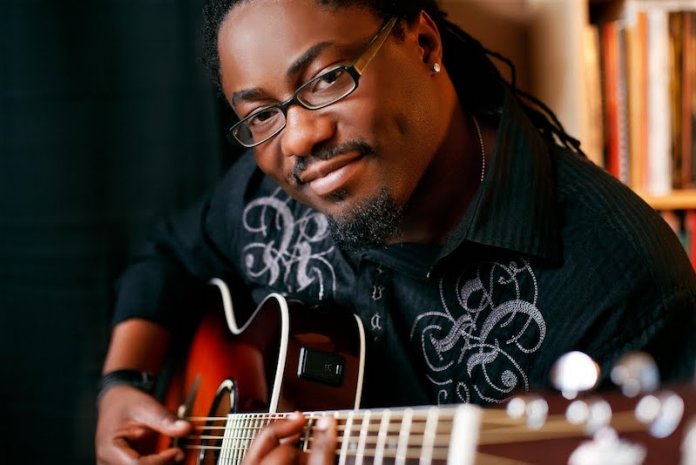 Dapo Torimiro grew on the various sounds from his father’s turntable in Lagos. From jazz to highlife, pop to rhythm and blues, Fuji to apala, and soul to funk, he has experienced them all. Picking up the guitar at 12, when production started in college, Dapo employed the use of on-board sequencers from which he transferred to digital audio workstations like pro tools and logic pro X – which he has been on for over 20 years.

The sound is his greatest inspirator. This has helped him stay constantly abreast with the contemporary music that has filled the market today. “I spend a lot of time practising on either my guitar or piano inventing and timeless sounds,” he revealed. With a strong foundation in jazz, it didn’t come as a shock when he started reeling out names of all-time greats like Herbie Hancock, Bud Powell, Bill Evans, et al in that genre of music as inspiration.

Legends like Stevie Wonder and Michael Jackson’s brilliance always leave him with something to try his hands on.
Advising the young on what to do to start up a career as a producer, Dapo insisted they must pick up playing the piano. “This would add invaluable value to your career as a musician. Serving the artist will keep a producer working all time. This has been my secret,” he said.

As a producer, he strongly believes a producer’s job is to serve the artist. No wonder his glowing resume has film scores and other variants of music on it. Everything in music to him boils down to the emotiveness. The main driver of good music is the power of emotions it wields in the heart of its listeners.
A quick flashback to the first music he made, he said with a smile:
“The movement of the music, the accents of chords, the rising of the music and the result was ‘Loving God’, which I wrote on a guitar and performed in a church a week later. The experience was both exhilarating and terrifying at the same time.”

With making music comes a lot of practice, which has now become Torimiro’s pastime. Many find the studio a sanctuary, but he finds it a place to put across all he has learnt. With a dint of hard work and focus, thriving in a racist industry could be indeed rough but with a good work ethic, and professionalism he’s made a remarkable mark.

“My little trick is under-promising my client. With that, I buy myself time to put in beyond the delivered promise – with that came referrals. When people can count on you, words spread. I guess I have been living off that reputation. Making music is borderless. It is everywhere. Even though there are rules guiding each genre, my ability to fully understand these rules and their application is the rudiment to breaking them and creating this robust effusive sound,” he said.

Torimiro’s constant touch with contemporary sounds and influences from his heydays has pushed his sounds to the stratosphere of Disney Land.
Even if he didn’t work on the La la land soundtrack with John Legend, his influences on multiple Oscar-winning projects as a consultant are immeasurable. Playing a jazz musician with Ray Gosling was like going back home. His respect for Ryan as a true musician is over the roof. Talking about his new project which involves writing and making music for upcoming artistes excites him. He’s also working on an art
documentary with his business partner, Lisa Murray, titled: “Soul Providers: Los Angeles”. On the side, Dapo is gearing to put out music of his own.

Having worked with a list of A-listers, the songwriter and producer is grateful for providence that has brought John Legend, Babyface, Usher Raymond, Justin Bieber, Frank Ocean, Ester Dean, James Fauntleroy, Kevin Risto, Waynne Nugent, Stacy Barthe, Demi Lovato, and other big stars his way. Writing and producing for those great American talents have made him a better writer.

“Aretha! Aretha Franklin, the voice of a generation. Working with Aretha was an out-of-body experience,” he said with excitement reflecting recalling the feelings of coming face to face with that singular voice that distilled off his father’s stereo long ago in far away Lagos. Being in a space of producing an album in collaboration with Babyface and the Clive Davis were some of his awesome moments. Topping that golden cake is the icing of performing live with Lauryn Hill, a phenomenal woman, who shattered the glass ceiling. Experiencing Stevie Wonder and Toni Braxton was quite a humbling experience. The respect, the fact that they listened and sought his input was a beautiful brick in the foundation of his confidence.

Among the artistes Torimiro has enjoyed working with either as a songwriter or producer include Billboard Penthouse owners like Justin Bieber, Demi Lovato, among others – in fact, they all have logged more than a number 1 on Hot 100 or other component charts. On this same list are Aretha, Toni and Michael Bolton.
When asked the most remarkable of all the projects, he simply stated: “Aretha Franklin and Michael Bolton’s projects remain evergreen in my memory.”

Speaking of musicians, he would love to work with, his lips quivered
at the name of the late king of pop, Michael Jackson and Adele. Disallowing pressure get to him has been the only way to keep his head afloat in the game. “Taking the job a day at a time, working on the fundamentals of creating music is all it takes. That is the spring to where I’ve gotten to today,” he said.

Come closer home, Torimiro states the globalization of our local music but the absence of structure and infrastructure. Even if he takes pride in it, imagine the ripple effect on the global scale if the infrastructure is put in place. This is synonymous to the clog in the wheel from replicating his Grammy production in a local artist. Withthe right opportunity and the right artist, it will happen.

He also reflected on the state of music in Nigeria, issues of royalties and contents: how royalties are meant to be a sort of
pension for musicians and the lack thereof in the country, and the lack of depth of local lyrics. “The Nigerian artiste can grow its
content without losing relevance,” he said.
His typical day is buried in work. “Finishing a mix, starting a new composition, or brainstorming a lyric. And on days every job seems to be completed, I go to YouTube to learn new production gimmicks,” he stated.