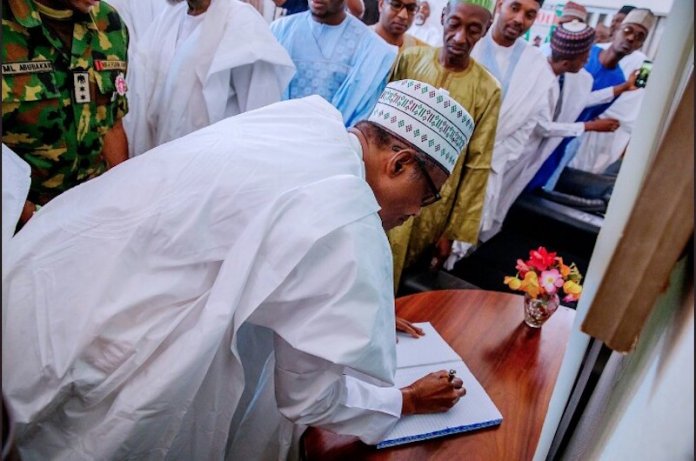 President Muhammadu Buhari on Sunday arrived Sokoto State to condole with the family, people and government over the death of former President Shehu Shagari.

The News Agency of Nigeria (NAN) reports that the president was received at the airport by the state Governor, Aminu Tambuwal, his deputy Manir Dan-Iya, Gov. Atiku Bagudu of Kebbi, and Sen. Aliyu Wammako.

Also on ground to receive the president were traditional and religious leaders as well as his admirers and supporters.

NAN reports that Buhari, who had earlier paid tribute to the late president, went to the family compound of the deceased in Sokoto metropolis to offer his condolences

The president had on Saturday directed that the national flag and other flags should fly at half-mast in military and para-military formations as well as public buildings for three days, starting from today.

The president gave the directive in a statement personally signed by him and issued in Abuja by his Special Adviser on Media and Publicity, Mr Femi Adesina.

“The late President represented almost the last link with the government of our founding fathers under Alhaji Abubakar Tafawa Balewa. He was also the first elected President of Nigeria.

“The late Alhaji Shagari was a man of many parts, teacher, local authority administrator, politician, minister, and finally President. He served his country with dedication and moderation.

“Over the years through interaction at the Council of State, he and I came to understand and appreciate each other whatever the differences we may have had in the past.

“On behalf of the Federal Government, myself and family, I send my condolences to the people of Nigeria, particularly to the late President’s family and the government and people of Sokoto State. May his soul rest in peace.”

The remains of the former president, who died at the age of 93 on Friday at the National Hospital Abuja, was laid to rest at his village, Shagari on Saturday, according to Islamic rites.

Shagari was president from 1979 to 1983 and won second election before being dethroned by a coup d’etat that brought in Gen. Muhammadu Buhari as military head of state. (NAN).