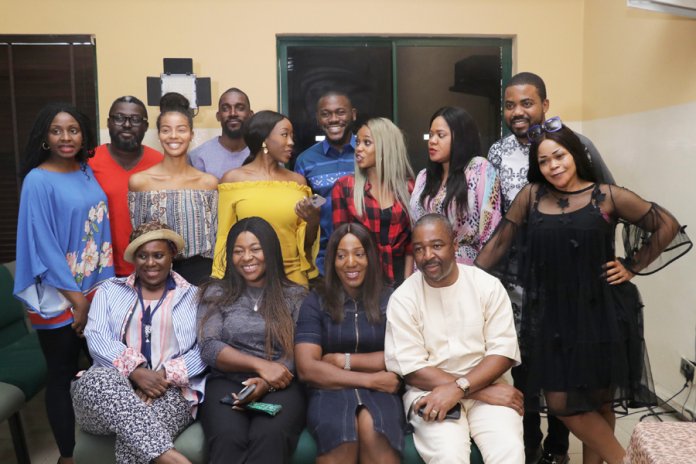 Gavor, Tina Mba and many more. Speaking at a press conference recently, Kathryn announced that her new movie, “Two Weeks in Lagos” is currently in production.

She expressed her joy for the opportunity to direct such an enthralling and stereotype-changing love story which is also faith-based.

“It’s a love story and also a faith based story. It’s a story about a young couple that goes through a lot of challenges” She stated. They talk about my country in a negative perspective. I am doing this to change that narrative. It’s also a love story with a difference because of the characters involved.

They are two characters with strong ethics who know exactly what they want”, she added.

Actors- Toyin Abraham, Mawuli Gavor, Joke Silva, Beverly Naya, were also present at the press conference to share their unique experiences during filming and the lessons gained from being part of such an unconventional movie. Toyin Abraham said

“This is my first time working on a faith based project/Christian film and it has been a lovely experience. The characters have been amazing and it has been fun all the way, the director is very calm and flows with everybody. I love the story, simple and nice”.

Kathryn Fasega is a Canadian-based filmmaker,

who is known internationally for her award winning movie, “Treacherous Heart”, which she directed in 2012 and has won several awards outside Africa such as Best Drama in Diaspora at the African Oscars in North Carolina, USA 2012 and Favorite Director African Oscars, Washington DC USA. She is also a member of the Calgary Society of I dependent Filmmakers (CSIF) as well as Women in Film and Television Alberta (WIFTA), and has won the award for the Global Woman Vision Award Calgary, in June 2012. The movie, “Two weeks in Lagos”, is set to be released in 2019.