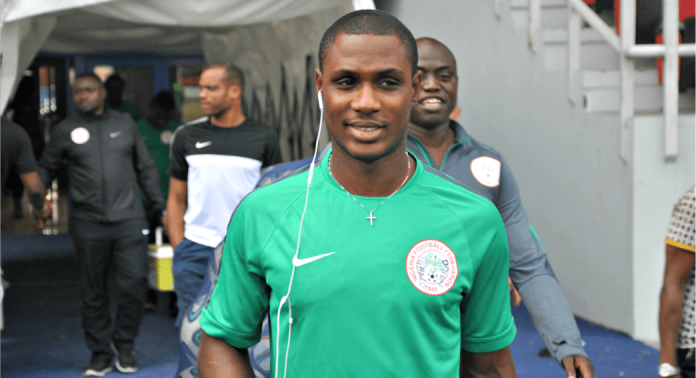 Super Eagles forward, Odion Jude Ighalo, has hinted of the determination of the team to win next year’s Africa Cup of Nations.

The China-based player who is AFCON 2019 top scorer with six goals believes the current squad under the watch of Gernot Rohr has stayed together long enough to blend into a formidable force capable of ruling Africa again.

“We are all aware of what Nigerians expect from us. We will prepare hard and strive to deliver,” the former Watford forward who is holidaying in Lagos after his Changchun Yatai club was relegated from the Chinese Super League stressed.

The Super Eagles star was one of the several Super Eagles and Super Falcons players who joined the Nigeria Football Federation (NFF) to celebrate sponsors of the national teams last Thursday night in Lagos.

Ighalo is unfazed by the fact that CAF is yet to announce a host country for the AFCON 2019 after it was taken away from Cameroon.

“Whether the championship is held in Egypt or South Africa, we will be ready. We have the advantage of having been together for sometime now, with the bulk of the team having played at the World Cup.

“Qualifying for the AFCON has also made us believe very much in our ability and of course, the Nigerian Spirit is always there to propel us in difficult times,” gushed Ighalo as he savoured the Sponsors’Night.

Ighalo rediscovered his scoring tricks in the AFCON 2019 qualifiers after a not-impressive performance at the World Cup in Russia last summer.

President of the NFF, Mr. Amaju Melvin Pinnick, heaped plaudits on Ighalo for overcoming the bad spell in Russia to get his magic back.

Pinnick described Ighalo as the very definition of patience, perseverance and fortitude, whose experience is worthy of study by the average Nigerian youth seeking success but confronted with challenges.

“Ighalo has become the metaphor for success on the back of perseverance, continued improvement and patience.

“For several months he was looking to score for the national team but it did not happen. He never gave up, and the coaches kept their belief in him. “Then, in only three days, he scored five goals to become the leading scorer in the 2019 AFCON qualification series. There is nothing drive and doggedness cannot achieve,” observed the NFF chief.

A five-goal haul over three days, against the Mediterranean Knights of Libya in the month of October, propelled Nigeria to top place in Group E of the qualification series, with the score draw away to South Africa in November eventually sealing a place for Eagles at the finals.

CAF is believed to announce a new host for the AFCON 2019 at the Awards scheduled to hold in Dakar, Senegal. South Africa is tipped to grab the rights ahead of Egypt. Nigeria last participated and won the AFCON 2013 in the Rainbow Nation.

The final match of the AFCON 2019 qualification series, an academic exercise against Seychelles in Nigeria on 22ndMarch 2019, will rather serve as part of the preparation for the finals for Eagles.