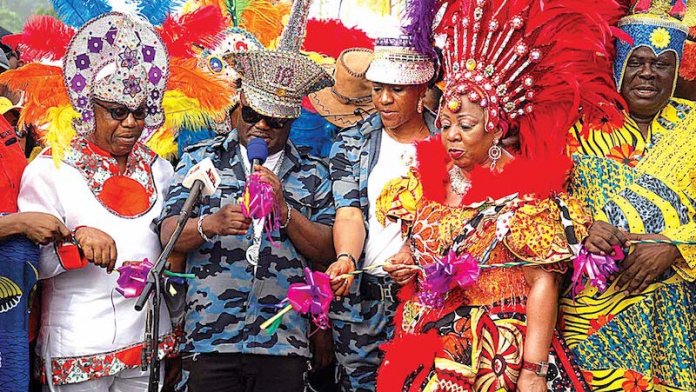 With the Carnival Calabar Power Week set to commence on December 26, the Cross River Government has invited all the presidential candidates of political parties contesting in the 2019 general elections to take a week-long vacation from campaigns and participate in this year’s carnival scheduled for December 28.

The State governor, Professor Ben Ayade disclosed this recently while flagging off the third and last dry run of the 2018 Carnival Calabar which has the theme `Africanism’.
Represented by his Deputy, Prof. Ivara Esu, Ayade said that the carnival has no political or religious affiliation, adding that the show was open to all.

“I want to use this opportunity, on behalf of the state governor to invite all the candidates of various political parties to come for this year’s carnival. We want them to take off one week rest from their campaigns and come and enjoy themselves. Carnival Calabar does not know any political party or religion.
“When you come to Calabar for the carnival, you are as free as air. I will like to invite them to come here and relax and as the people see them, maybe those who are able to dance better may attract more votes,” he said.

Earlier, the Chairman of the Calabar Carnival Commission, Mr Gabe Onah, said that the carnival has become the melting pot of Africa’s hospitality.
Onah said that the `wonders on wheels’ had earlier had their dry-run where over 200 bikers participated.
Onah said the state had sustained the hosting of the largest street party in Africa for a record 14 years, adding that it has promoted the talents of budding artists and has equally united the people of Cross River and Nigeria at large.

The Chairman said that the five competing carnival bands and others are ready to tell the African story from the African perspective.
He commended DSTV and MTN Nigeria for their partnership and support for the carnival over the years.

The President of Federation of Tourism Association, Alhaji Sabo Saleh, said that the association was in the state to underscore and study the carnival with a view to find areas of partnership and support.
Saleh said that tourism plays an important role in the economy of any nation or state, adding that the association under his leadership would continue to support Calabar carnival because Cross River has placed Nigeria’s tourism on the global map.

“This is one of the biggest events that is coming out of Africa and it is sponsored by the Cross River Government. They are doing this to support the local people because tourism is multi-faceted and this helps the local economy to grow,” Saleh said.