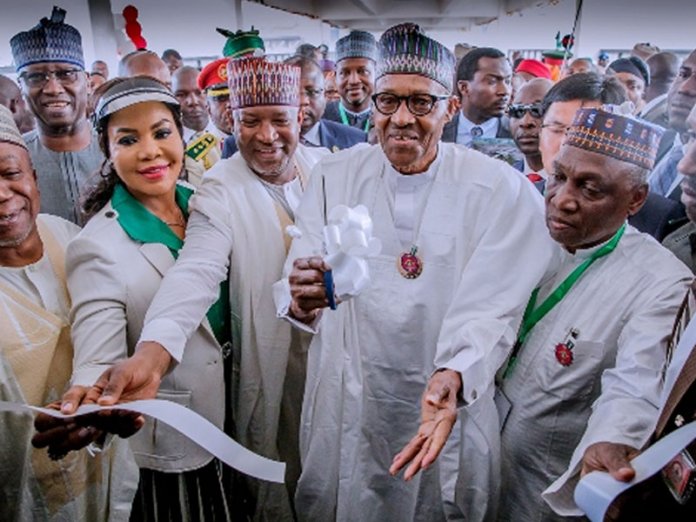 President Muhammadu Buhari, Thursday in Abuja, formally inaugurated the newly- built 15 million passenger-capacity terminal at the Nnamdi Azikiwe International Airport (NAIA), with an assurance that the government was committed to developing Nigeria into a regional air transportation hub, to enable it assume its leadership position in the aviation sub-sector in Africa.

Buhari in his keynote address at the event, disclosed that his administration recognises aviation as a catalyst for economic growth and will continue to encourage and support the actualisation of projects that will place Nigerian airports among the best in the world.

He stated that with the commissioning of the terminal, Nigeria is moving towards achieving and meeting global aviation standards in facilitation, passenger processing and service delivery in tandem with international best practices.

The formal commissioning of the new terminal, he said, represents yet another significant milestone for international air travellers in and out of the Federal Capital Territory.

He said, “you will recall that on the October 25, 2018, I commissioned Port Harcourt International Airport Terminal. During the event, the Minister of State (Aviation) stated that the Nnamdi Azikiwe International Airport Terminal, Abuja would be completed and ready for commissioning before the end of the year. Today, that promise has been kept. I wish to commend the minister and his team for a job well done.”

He stated that the event was a reflection of government’s deliberate policy to sustain the development of Nigeria’s infrastructure, noting that the country was gradually closing the infrastructural deficit bedeviling it.

Buhari said, “I am happy to note the progress being made in both the airports and seaports on the implementation of the Executive Order on the Ease of Doing Business. Government officials manning these gateways are to sustain the momentum and ensure travellers in and out of the country have the best of experience as a necessary complement to the ultra-modern terminal.”

He further stated that the terminal is the first airport terminal to be connected to rail transport system in the country and indeed, the region.

The president added that it has provided passengers and other airport users with a choice in the mode of transportation to and from the city centre, noting: “I recall taking a ride from the City Metro station to the airport on the day the rail line was commissioned.”

Speaking earlier, the Minister of State for Aviation, Hadi Sirika, disclosed that the terminal was the second in the series of airport terminals to be commissioned from the projects funded by the China-Exim Bank loan of $500 million with a counterpart funding of $100 million from the Debt Management Office (DMO).

Sirika noted that from political and economic perspectives, the airport is very strategic to Nigeria, not only because it is the gateway to the nation’s capital but also because it the second busiest airport in the country and the fastest growing in passenger traffic in West and Central Africa, with an average growth rate of 8 per cent, where the world average growth is 5.8 per cent.

“The airport processed 5,709,012 passengers in 2017. This volume equals to about 13 times the total number of passengers recorded by Ghana as a country.”