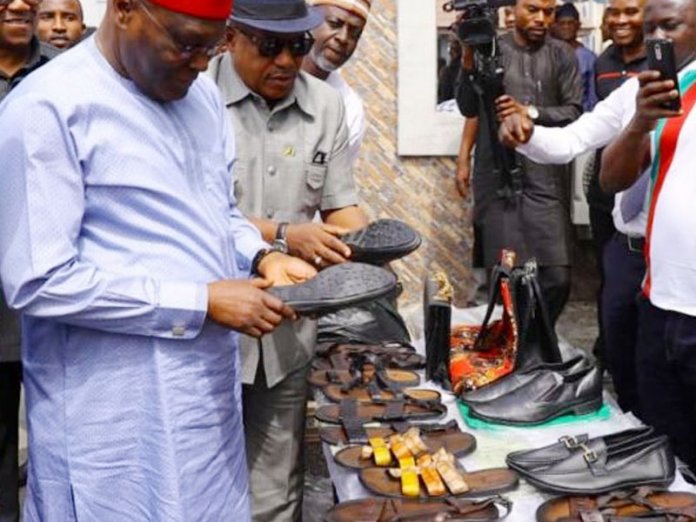 Emmanuel Ugwu in Umuahia and Adedayo Akinwale in Abuja

The presidential candidate of the Peoples Democratic Party (PDP), Alhaji Atiku Abubakar, yesterday pledged that he and his running mate, Mr. Peter Obi, would offer Nigerians uncommon leadership that has never been on offer since the country’s independence in 1960.

Atiku, who spoke during a town hall meeting with representatives of the business community in Aba, Abia State, vowed to revive businesses and the manufacturing sector if elected president in 2019.

He blamed the ruling All Progressives Congress (APC) for instigating economic regression in the country.

According to the PDP presidential candidate, it is unacceptable that Nigeria has a high unemployment level, saying Nigeria cannot afford to have 50 million unemployed men and women.

He said, “That is why there is insecurity. To be able to do business, you must have a secure environment. Otherwise, you will not even be able to come out of your house and go to your factory.

“We have two very experienced men, both in governance and business: Peter Obi and myself. I don’t think Nigeria has ever produced this type of leadership since Independence. If you are doubting us, you know what you should do? Try the two of us.

“If you are selling food in the market, I own fast food (restaurants). If you are in printing, I have a printing industry. If you are into broadcasting, I own television stations.

Atiku stated that his various companies had been spending N600 million to pay for trucks haulage until he decided to start his own haulage business.

“I sat down with them and said, ‘No, we must go into road haulage. Let’s have our own trucks. I can’t spend N600 million on mere road haulage.’ And today, we’re in a successful haulage industry.

“So, my brothers and sisters, the government that has tried to solve most of the challenges that the business community are facing in this country is the PDP government and here is another opportunity, so you don’t repeat the mistake of bringing back this government.”

Atiku, who was inundated with the legion of problems stifling the economy of the South-east zone, said he was very much aware of the challenges that businessmen and manufacturers face since he happens to be one of them.

He responded to 10-point problem of the business and manufacturing community presented by the President of Aba Chamber of Commerce, Industries, Mines and Agriculture (ACCIMA), Mr. Andy Uba Obasi.

He listed the demands to include power, seaports, railway, support for Enyimba economic city, favourable federal government industrial policies, ease of doing business, among others.

But Atiku said, “Whatever can promote business I will do it so long as it is within the confines of the law,” adding, “that is a promissory note I’m giving you because I’m a businessman and I believe in creating jobs, wealth and prosperity.”

“I feel your pain; it pains me because I’m a businessman and manufacturer,” he said, adding that the business community must work together with his incoming administration “to remove the problems”.

Atiku said the business community in the South-east zone has genuine complaints on the issue of the absence of functional ports in both the South-east and South-south zones.

He said there is need to bring ports nearer to where business is done as it would bring down the cost of doing business and ultimately lead to business expansion and creation of more jobs.

According to him, the presidential ticket given to him with Mr. Peter Obi as his running mate was tailor made for business growth because “we have two very experienced men both in governance and in business.”

Obi, who had earlier addressed the business community before his boss, said that the choice of Aba for the meeting was because “it represents the engine room of manufacturing that can change Nigeria.”

He said Nigeria would find a different kind of president in Atiku as he is interfacing and interacting with the organised private sector to find out what should be done “to wake up the dead economy.”

“Atiku has come to tell you that he has the solutions to the problems; he knows what to do to change Nigeria,” the vice presidential candidate said.

Abia State Governor, Dr. Okezie Ikpeazu, in his remarks noted that Aba remains a very important factor in the national economy, hence the need for Atiku to come down to engage the business community in Enyimba city.

“Aba is a special economic zone that will drive the nation’s economic rebirth,” he said, adding that the GDP of the commercial city and the entire Abia was likely higher than the national average due to the efforts of the “hardworking business and manufacturing community.”

He promised that Atiku would provide a tailor-made solution to the problems hampering industrial growth in Abia where many industries have died due to adverse economic policies in the centrally controlled national economy.

The National Chairman of PDP, Prince Uche Secondus, told the business community that Atiku has been tried and tested and recorded success both in public and private sectors.