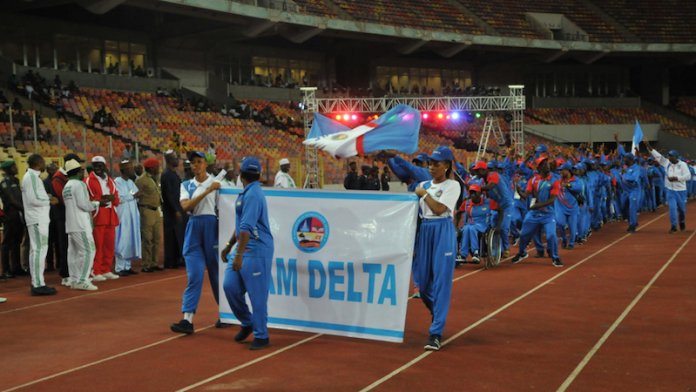 Edo State Governor, Godwin Obaseki, has assured Nigerians that his administration will host the best National Sports Festival since the inception of the games in 1973.
The Governor made the promise at the National Stadium in Abuja on Sunday night moments after Edo State was handed hosting rights to the 2020 edition of the festival.

Edo State finished in third place behind Rivers State and winners, Delta State at the just concluded 2018 edition of the festival hosted by Abuja, the Federal Capital Territory.

An elated Obaseki thanked the Federal Government for reposing confidence in Edo State by handing it hosting rights to the 2020 games. The Governor who embarked on an excursion into world history by drawing comparisons between the determination of his state to do everything possible to deliver a qualitative games, and the valiant British pilots whose sustained bombing of German soldiers and facilities during the Second World War, helped tilt the war in the Allies favour, said:

“Ladies and Gentlemen, taking cue from the great British statesman, I and the people of Edo State assure you that the confidence reposed in us would be justified. There will not come a time anyone will have cause to regret this momentous decision you have taken to hand us this hosting right.

“Like the valiant British fighter pilots of World War II we will take every step necessary, make every sacrifice needed, and climb every height necessary to deliver the best Games in the annals of the Sports Festival”.

Acknowledging that there would be challenges in hosting the games, the Edo State Governor said: “There will be challenges on the way, no doubt but we are Edo people. We have the men who can do the job and the facilities that will facilitate performance.
“Whatever challenges there are, we will overcome because Edo people tread where even lions do not. Like our warriors of old, we will slay every foe and surmount every obstacle to succeed”.

He said the 2020 Games will surpass previous games in every respect.

He assured that in the end, Nigerians will be more than happy to have witnessed the games.
“We make a solemn promise today that we will give it our all and at the end of the day everyone would say of the 2020 Games, ‘this is our festival in which we are well pleased’”.