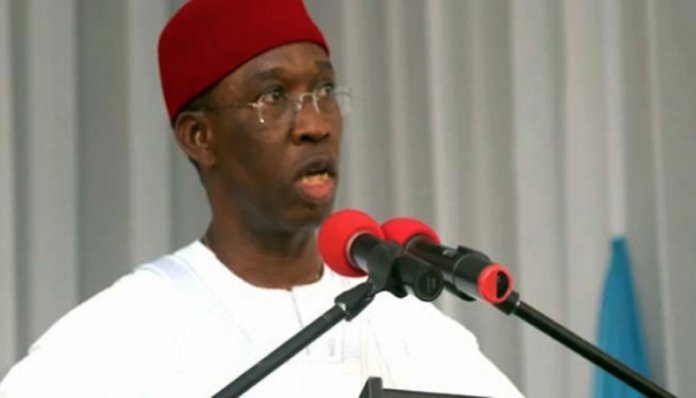 •Presidential candidate pledges 40 per cent of cabinet appointments to youths

Delta State Governor, Dr. Ifeanyi Okowa, yesterday said all former presidential aspirants that contested for the ticket of the Peoples Democratic Party (PDP) and all the party’s governors have come together to push the campaign of Alhaji Atiku Abubakar for the nation’s presidency up for contest in 2019.

Speaking on the ‘Morning Show’ programme of Arise News, a broadcast arm of THISDAY Newspaper, Okowa insisted that contrary to reports, the party has gone beyond the issues relating to the party’s primaries and is preoccupied with winning the 2019 elections.

“For those you are not seeing visibly, they also have assignments they are undertaking in the background for the party because it is not possible to engage all of them in directorates, but because they are presidential aspirants does not mean that they are not party men.

Also responding to the speculations that the governors of the South-east and the South-south are not fully part of the Atiku project following the emergence of former governor, Mr. Peter Obi, as the vice presidential candidate, Okowa described the insinuations as untrue.
According to him, “That is not the reality on the ground.

“People are over hyping it. The South-south and the South-east caucus met on Friday in Port Harcourt. In that meeting, we took decisions on what next to do. We are indeed planning a South-south zonal rally. Committees are being put in place ahead of the elections under the leadership of Governor Nyesom Wike. A date is likely going to be taken for the rally in the early part of January.

“There are actually no problems within the South-south; I can confirm that to you. In the South-east, yes, there were some initial hiccups; there is no doubt about that because there were certain party procedures that was supposed to have been followed that were not followed. Some of us believe that we were not taken along before the announcement of the vice presidential candidate.

“We also understand that the candidate has the right of choice of who would be the vice presidential candidate. We have moved beyond that. We have had meetings where we have been able to talk over all the issues.

“The fact is: some leaders of the party including all the governors ought to have known before the announcement of the candidate; not because they want to change the choice but they just wanted to be briefed formally before the information was given to the press. But that has been pushed behind us and we are moving forward.

“The South-east is also meeting. It is a strong PDP zone. In politics, there are always issues and the issues have to be discussed. The South-east is fully on board; from the last meeting we had in Rivers State, so is the South-south. So, I don’t see any challenge in any of the zones at all, not right now.”

Okowa also spoke on the defection of his predecessor, former governor, Dr. Emmanuel Uduaghan, to the All Progressives Congress (APC) and the implication of this on the cohesion of the James Ibori political family, which they both belong.
This, he said, was not an issue.

According to him, “Actually, the Ibori family is still strong. Ibori remains our national leader. I want to assure you that that family is still intact.”
The governor, however, declined to speak on why Uduaghan left the PDP but said that it was the outcome of the election that would determine if it was a right decision.
He stressed that the defection of Uduaghan from the PDP has not had negative impact on the Ibori family and the party.

“I’m the kind of person that will not dissipate my energy looking into the past; and begin to sorry in it. What I needed to do was to assemble a smart team; and we were able to think out how best to get out of the problem that we had.

“Unfortunately, as we moved on, we had the issues of the crisis that came up in the Niger Delta and the blow up of the Forcados Export line, which also brought further challenges to our woes as at then.
“But we are able to work as a team to restructure our debts. We are able to prioritise the projects to undertake and we are able to move forward. Today, we have consolidated and moving on.”

Meanwhile, Atiku has pledged that under his presidency, 40 per cent of appointments into the federal executive council will be reserved for youths.
Addressing a conference of various youth groups at a town hall meeting in Lagos yesterday, Atiku specifically said the Ministry of Youth Development under his presidency would be headed by an individual under 30 years.

Fielding questions at the forum, which afforded young people an opportunity to interact with one of the leading presidential candidates, Atiku said he would keep faith with Nigerian youths because they are the future of the country.

Nigeria’s estimated 180 million population is largely believed to comprise 60 per cent youths.
Answering a question on how he would realise one of the cornerstones of his campaigns, which is anchored on creating jobs, he said, “It is the private sector that creates most jobs. Government gives incentives, for example, lower tariffs and taxes. This is how jobs will be created. That is why I got a first class vice presidential candidate.”

Giving an example of his love for youths, Atiku stated, “I have many children, but only one of them works for government. Others are in my various companies. I believe in creating jobs for the youths.”

Probed by a youth on his plans to ensure that the much-advertised brilliance of his running mate, Dr. Peter Obi, was enveloped by a cabal or a kitchen cabinet that will not allow him perform, Atiku explained that it was not the hallmark of the PDP to hangout around cabals.

He said, “As vice president under President Olusegun Obasanjo, I enjoyed unfettered freedom, which led to many of the achievements that was recorded by that government in telecommunications, privatisation, due process and other economic policies that grew our GDP steadily by six per cent annually.

“Our government will not be run by a cabal. We will make qualified youths get jobs in places like the NNPC, Central Bank of Nigeria and other government agencies through adherence to due process. Government can’t give jobs to everybody. It is the private sector that creates much of the jobs through an enabling environment created by government.”