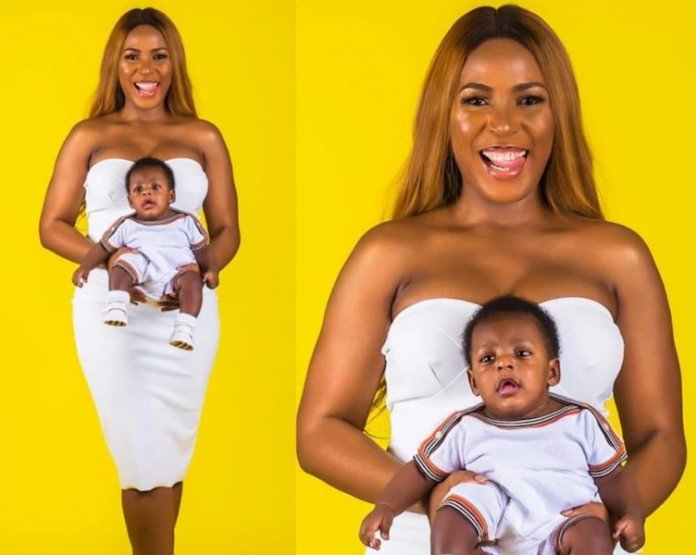 The identity of her baby’s daddy, stance against premarital sex, and her supposedly fake engagement were the major issues that trailed her post-delivery. But in what has been termed “an epistle” released yesterday by the famous blogger, alongside pictures of her carrying the baby boy, the controversial blogger would not clarify whether she was truly engaged as she had announced then. She however apologized for having a child out of wedlock, a thing she attributed to love.

She wrote, “Now to the reason why you are reading this. I argued with myself for a long time whether to put this out or not…and finally decided it was a story I wanted to share. I’ve always been open about my life but I’m sharing details about my personal life mostly because of the girls who look up to me. The girls I have mentored, mentoring right now and plan to mentor in the future. I’m very particular about our young girls and I have personally tried over the years to be an example in some way; tried to teach these girls how to fight for their dreams, how to live right and do right and then I go and have a child out of wedlock and that must be a little confusing to some of them and especially with so many untruthful stuff out there about me.

“The most hilarious is that I had a child for a married man. Lol. Here’s my answer to that! The married man that I will sleep with has not yet been born. If he’s been born, he will die, be buried, rise and die again before he will lay with me. I don’t do married men. The father of my child is a single man and his name is Sholaye Jeremi. To be honest, at some point I thought he was my final bus stop but you know how life happens…lol. Unfortunately he and I are a completely closed chapter. Sadly for our son Jayce, it’s the kind of chapter that can’t ever be opened again.

“It was a whirlwind romance. He was the funniest and most romantic guy I’d met up until that point, so it was easy to fall in love and I truly believed the feeling was mutual. A few weeks after we met, it seemed like we were planning a future together. This man was already calling me Linda Ikeji Jeremi and making all these plans but then just like that, it was over between us. I went from waking up every morning to love text messages from him to no more calls. I was just thanking God for finally sending me my own man when all of a sudden we were no longer talking to each other. Later he would tell me what scared him off.

“By mid-2017, we were both still single and we started seeing each other again quietly. There were times it was very intense and we talked about a future together, and there were times that I couldn’t figure out what exactly I was doing with this guy. We were not suited for each other. Totally different lifestyles. And there was the problem of my fame. I walked away from this man a million times and he came after me a million and one times.
“Then I fell pregnant. It wasn’t planned, it just happened; though we talked about having a child together just two months before I fell pregnant. He said something about putting a billionaire baby inside me and I remember jokingly telling him that I’m also a billionaire so our child was going to be a billionaire on both side…and we laughed. But after I fell pregnant, things became extremely weird between us. If I tried to explain what happened, I wouldn’t be able to because it was confusing to me. . .

“Around when I was about three months pregnant, he did come to see my parents and actually became very cool with my dad. They were literally exchanging Whatsapp messages every day. He later agreed to a traditional wedding which he didn’t follow through and then he switched. He began to treat me with so much hate and aggression that I and my family had to cut him off completely. To be honest if anybody had told me when we met three years ago, considering how deeply we cared for each other that I would fall pregnant two years later and he would completely turn his back on me for most part of my pregnancy, I never would have believed it but that’s what happened.

“One of the things I have learnt in my life’s journey is that your idea of how life should go might be different from the way life actually goes. It’s called Life Happening. Sometimes it unfolds into something we never dreamed of but because we don’t recognize the route we find ourselves on our journey through life, doesn’t mean God won’t get us to our destination. Remember, an uncertain chapter doesn’t ruin the whole book. Life will happen whether we are ready or not. All we can do is keep our heads up and keep moving.

“I’d also like to address a few other issues. Number one is this celibacy issue. So many people have trolled me over it and I’d like to correct the misunderstanding. I have never ever in my life said people shouldn’t have sex before marriage. Never ever have I said that; I have even argued with quite a few people that it is not feasible in this day and age.
What I have always said and I maintain till today is; do not ever sleep with men for money because any woman with a brain and determination can get her own money herself. And there’s nothing sweeter than your own money.”