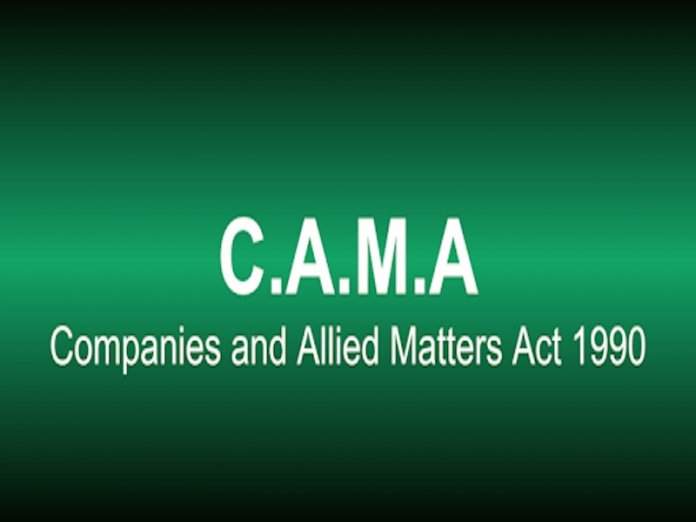 The passage into law of the bill for the re-enactment of the Companies and Allied Matters Act (CAMA) will boost investment in the country.

Disclosing this at the second induction ceremony of the Compliance Institute with theme: ‘Implementation of Beneficial Ownership Disclosure in Nigeria, the Director, Compliance and Litigation, Corporate Affairs Commission (CAC), Alhaji Garba Abubakar, revealed that the issue of money laundering and terrorist cannot be discussed without examining ownership and control of corporate entities.

“As we speak, the drag bill for the re-enactment of CAMA Act has passed through the Senate and we are hoping that it will soon be taken by the House of Representatives and once it is passed it will be taken to Mr. President for assent.

“It is a very major development in our law because for us to compete globally and have an enabling environment and improve in our ease of doing business, our laws have to be modern.”

He explained that companies and corporate bodies are the major instruments people use to channel illicit funds and conceal the source of funds either through surreptitious connection and control of natural resources, or illicit financial flows through fictitious contract and other issues.

Abubakar, pointed out that the issue had attracted global attention in the last 10 years, especially with the Financial Task Force 40+ recommendation 24 and 10.5, “and recently with the Nigeria Extractive Industry (NETI) transparency initiative and open government partnership initiatives.”

The Commission Litigation Director further noted that as the body vested with the authority of maintaining and running the companies’ registry, it is the primary responsibility of the CAC to ensure that the commitment was given effect in the revised bill for the enactment of the CAMA, “we have made provision for the disclosure of persons with significant control.”

Earlier in his remarks, the President, Compliance Institute (CIN), Mr. Pattison Boleigha, said the event was another giant stride towards actualising the country’s effort to stem the scourge of corruption, defeat terrorism and instil discipline and a culture of compliance in the country.

He also noted that a total of 151 members successfully qualified for the award of the institute’s compliance professional qualification in examinations conducted in 2018.

Boleigha added they inducted 11 associate, compliance institutes in Nigeria (ACIN), who applied and got exemptions as compliance practitioners with the requisite qualifications and experience and 19 honorary fellowships of fellow, Compliance Institute, Nigeria (FCIN) certifications were awarded.

Continuing, Abubakar added: “We are hoping that with these disclosures that may not be an end in itself because the people that want to hide and conceal, they are always ahead.

“Therefore as they are trying to be ahead, we are also devising ways to checkmate all these concealments.

“We need to have provisions that make it easier for people to do business in Nigeria and for greater transparency. The limited liability partnership is not a bill, instead we are making it part of the CAMA.

“Under the existing law, we can only register a business and a corporate trustee or a company under part.”