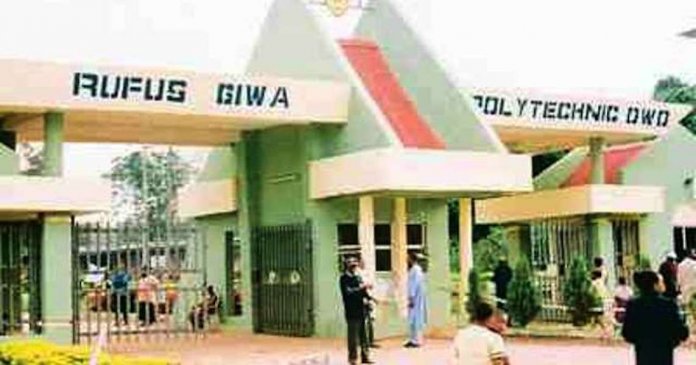 Akinyemi was abducted last Tuesday along with three others near Amurin Village along Owo- Akure Road.

THISDAY learnt that the killing of the lecturer may be due to the inability of the kidnappers to pick the N500,000 ransom where it was placed.

Three other victims kidnapped along with Akinyemi had regained their freedom one after the other.

Akinyemi’s gruesome murder led to the suspension of the second semester examination scheduled to begin Monday while students, lecturers and staff of the institution moved round the school in procession as a mark of respect for the death of the deceased.

The state governor, Mr. Rotimi Akeredolu, also suspended all official assignments and rushed to the school to commiserate with the academic community and described the death of the polytechnic staff as unfortunate.

The remains of the 52-year-old lecturer was said to be found in a bush tied to a stick on Sunday evening after being in the den of the kidnappers for six days.

Addressing journalists on the death of Akinyemi, the Chairman of the Senior Staff Association of Nigerian Polytechnic (SSANIP), RUGIPO chapter, Mr Chris Olowolade, described the death of the father of three as sad and unfortunate.

He explained that the union had entered into negotiation with the kidnappers in order to secure his release but said: “We lost him to the kidnappers and we received his corpse yesterday.

“The kidnappers placed a ransom of N100 million on him which nobody can afford but they reduced it to N7 million after two days and later grudgingly asked us to come with N.5 million.

“The money was taken to them and the person who took the money was directed by the kidnappers to where he should drop the money. They asked him to stop, reverse and move just to confirm if he was the actual person bringing the money.

“But after some hours, they called that the man bringing the money should come back that they didn’t see the money, only to be called by the Rector yesterday to go and identify a corpse.

“We rushed to the morgue and discovered it was his corpse. He was tied to a stick with his clothes and left his remains in the bush. The body was recovered by the police and deposited at the morgue, it show he was badly maltreated before he was killed.”

He explained that the late Taiwo was shot at the back by the hoodlums while he was also heavily matchetted before he was killed.

Addressing the institution’s community, Akeredolu explained that the state government and the security operatives tried to rescue the deceased.

He gave the assurance that the government would be committed to the security of lives and property, saying he has directed the security operatives in the state to increase road patrol to curb the activities of the hoodlums on the roads.

The state Police Public Relations Officer (PPRO) Femi Joseph, who confirmed the killing of the kidnapped staff of RUGIPO, also described the death as unfortunate, saying all other victims had regained their freedom.

Joseph said men of the state police command have been on the trail of the kidnappers but said no arrest has been made.

“We have resolved to increase our manpower on our roads with more patrol to reduce the activities of these criminals to the barest minimum,” he said.

He enjoined the people of the state to be more security conscious and report strange faces or movement to the police.

“I can assure you that justice will be done and the search is underway for those who are behind these evil acts, to find those responsible and bring them to justice.

“We will make no distinction between the kidnappers who committed this act and those who harbour them,” Joseph said.