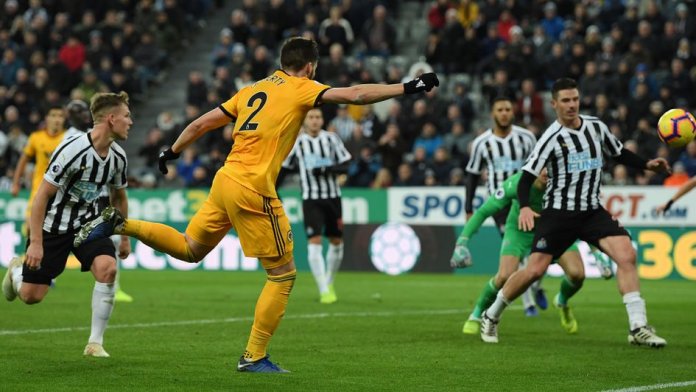 Matt Doherty headed home in the fifth minute of injury time to give Wolves victory over 10-man Newcastle at St James’ Park.

Doherty netted the rebound after Diogo Jota’s shot was pushed into his path by Magpies goalkeeper Martin Dubravka.

Jota had given Wolves the lead before the break when he side-footed home.

Ayoze Perez’s superb header quickly pulled Newcastle level, but they were reduced to 10 men when DeAndre Yedlin was sent off after 57 minutes.

Newcastle had dominated the first half – Salomon Rondon smashing a free-kick against the crossbar – but came under increasing pressure after Yedlin’s dismissal.

Doherty forced a diving save from Dubravka and Raul Jimenez hit the crossbar, before the former struck the decisive blow as the clock ticked down.

Victory is Wolves’ second in succession in the Premier League – the first time they have secured back-to-back wins since early October.

Wolves’ week could not have gone much better.

This victory came four days after they ended a run of seven league games without a victory by beating fourth-placed Chelsea 2-1.

They were made to work hard by Newcastle, who had the upper hand prior to Yedlin’s dismissal.

But Jota was again influential – scoring his second goal in as many weeks and winning the free-kick which led to the sending-off. It was also his shot that was palmed into Doherty’s path late on, and Wolves will hope his bright form continues throughout a festive period that includes matches against Liverpool and Tottenham.

For now, though, they can celebrate a place in the Premier League’s top 10.