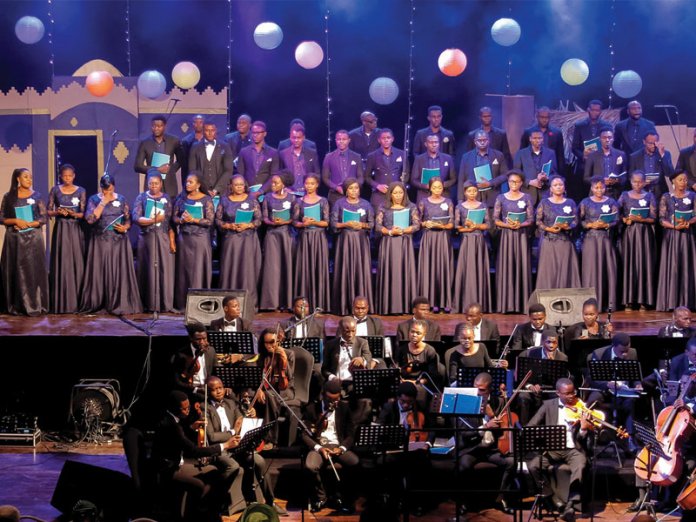 An evening of evergreen Christmas carols and songs with a Nativity-inspired operetta organised by the MUSON Centre, Lagos prepares its audience for the season. Okechukwu Uwaezuoke writes

CONCERT
A Night in Bethlehem should be the MUSON Centre’s season’s greetings to its habitués. After all, this Lagos’s one and only venue for classical music has a known tradition of hosting its Christmas concerts on first Sundays in December.

Talking about the production itself, the programme booklet calls it an operetta. And that, it is not. Unless the organisers consider the Nativity story, around which it revolves, a light-hearted issue. Yet, nothing can be more serious than the story of a Saviour, Who was born to arrest the premature destruction of the entire mankind. By setting their will above their Creator’s, men opened a Pandora’s box of evil and marked themselves for destruction. To save the erring mankind, the Sublime One incarnated His Love in flesh and blood as Jesus Christ of Nazareth.

So, it happens that this Nativity story – which have been enthusiastically re-enacted in both liturgical and secular traditions – has been subjected to various adaptations. The version embedded in the MUSON concert programme, which expectedly effervesces with evergreen Christmas melodies and sing-along carols, is credited to the Nigerian composer and musicologist Laz Ekwueme. This, of course, comes with the joint performances of the MUSON Choir and MUSON Chamber Orchestra, conducted by Sir Emeka Nwokedi.

Scene opens somewhere in the premises of Bethlehem Hotel. A chamber maid Ruth (Jennifer Maduka) forces her soprano voice through the defective acoustics, as she sings about a busy day of polishing and scrubbing. She is interrupted and rebuked by the owner of the hotel, simply known as Lady (Angela Izegbu), who is expecting royal guests. Because of the expected guests, she turns down a stranger (Jon Williams) who seeks lodging at the hotel and instructs her husband Simon (Dennis Adeoti) to inform enquirers that there are no more rooms.

The poor sound quality persists, taking the shine off the initial duet by Mary (Ifeoma Ubani) and Joseph (Fred Duke). But somewhere along the line, the musical production soon resolves itself into some euphony. The arrival of the Magi – a. k. a. the Wise Men – on the heels of an aria ensemble by Mary, Ruth, Lady, Joseph and Simon brings the narrative to its expected climax.

The hotel-owning Lady scoffs at the poor while keeping her lodgings for the rich. But, it is ironically the new-born child of the allegedly poor Mary and Joseph that the much-awaited VIPs are seeking. Indeed, the narrative – like many before it – strangely labels the couple from Nazareth poor, even when no historical evidence corroborates this assumption. According to the well-known biblical account, Christ’s birth in a stable was merely a consequence of the overcrowding of Bethlehem, which was receiving an unprecedented influx of visitors for a planned nationwide census. It had nothing to do with poverty or the fact that Joseph could not afford a decent accommodation for his pregnant wife.

Voices of shepherds confirm that the existence of the child the Magi – Gaspar (David Adebowale), Melchior (Chidubem Nwokedi) and Balthazar (Daniel Etim) – are seeking. As the identity of the child becomes evident to all, even the supercilious lady asks for the forgiveness.

It is at this point that the production dovetails into medley of Christmas carols sung mainly by the choir and the audience. First, there is the popular “Silent Night” composed in 1818 by Franz Xaver Gruber to lyrics by Joseph Mohr in the small Austrian town of Oberndorf bei Salzburg and was declared an intangible cultural heritage by UNESCO in 2011. It is followed by “O Little Town of Bethlehem”, written by Steven Taylor, Phillips Brooks and Lewis Redner. John Francis Wade’s “O Come All ye Faithful” concludes it all and sets the stage for the curtain call.

Flashback to the concert’s first part before the brief intermission… There is the opening song, “Lo! He Comes with the Clouds Descending”, which obviously is inappropriate for this season. The song, composed by the British choral conductor, organist and composer, rather alludes to the eschatological hopes of the devotee. Still, its inclusion in the programme shrouds the event in an ambience of solemnity. But, the next song “Of the Father’s Heart Begotten”, also by Willcocks, chimes with the Yuletide mood.

It gets better, albeit still solemn, when the choir moves on to “Mary, Did You Know?” by Mark Lowry and Buddy Greene. With this song, the choir becomes more confident. Then, the audience gets the chance to hear the concert’s first soloist – the tenor David Asuquo – when the choir lunges into the next song, “Angels, We Have Heard on High”, which was arranged by Daryl McKenzie. The next soloist – Stephen Nwagwughiagwu, bass – features as the choir sings Pietro Yon’s “Gesu Bambino”.

Really, the solemnity of the season cannot be overemphasised. This is especially with the present trivialisation of the entire concept of the Yuletide, which explains why commerce takes the centre-stage. As the erring mankind swarms around the golden calf of earthly transience, “Everlasting Light” by Claire Cloninger and Mark Haye reminds the audience of the reason for the season. MUSON’s one-time resident pianist Tunde Sosan temporarily ascends the dais as the orchestra’s conductor, while his little daughter (clad in a red dress) recited the sobering introductory lines.

If the concert lapses into light-heartedness at this stage, it is because of the sanguine tempo of the ensuing songs in local languages. First, there is “Keresimesi, O De”, composed by Aderemi Olajide, and “Amuworo Anyi Otu Nwa” by Sam Ojukwu.

Ending the concert’s first part with the familiar “For Unto Us a Child Is Born” by Georg Friedrich Handel amply compensates for the lapses of this segment. With the choir singing with so much gusto, the ambience becomes more joyful and less solemn.

It is also an unwritten tradition that all MUSON Christmas concerts conclude with José Feliciano’s “Feliz Navidad”. This comes after the curtain call to permit the members of the audience to exchange season’s greetings as they file out of the concert hall.