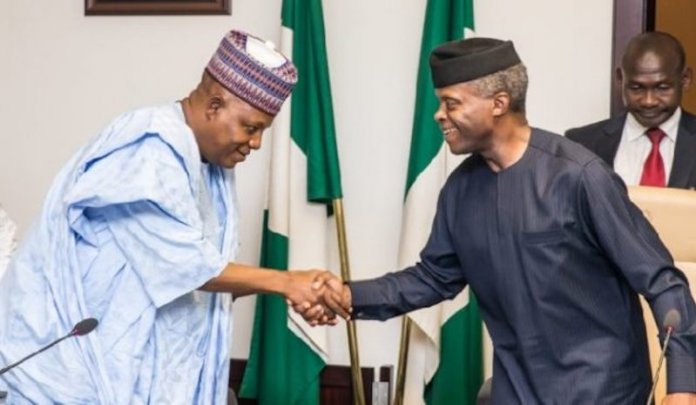 The move to unite the warring members of the All Progressives Congress (APC) in the South-west has begun with a meeting of the reconciliation committee led by Borno State Governor, Alhaji Kashim Shettima, with Vice President Yemi Osinbajo.

A statement by the spokesman of Shettima, Mallam Isa Gusau, e-mailed to THISDAY said: “The meeting was part of ongoing consultations and hearings from specific leaders and members of the APC from the Southwest.”

He revealed that “the vice president gave an insightful overview of his understanding of the issues in each of the six states of Lagos, Ekiti, Ogun, Ondo, Osun and Oyo with thoughts of possible ways out.”

The aide said Shettima led other members of a national peace and reconciliation committee, set up by the APC to reconcile aggrieved members in South-west geo-political zone, to the presidential villa, for a consultative meeting with Osinbajo.

He said the meeting held at the room of the vice president in Abuja lasted more than an hour.

Gusau said the committee members, after meeting with the vice president, would be meeting other specific leaders in each of the states to get varied positions so as to be equipped with facts.

The committee will tomorrow make public invitations to give sufficient notice for aggrieved members to appear during the committee’s sittings in Lagos, Ekiti and Oyo States to hear submissions for the six states that will be paired for each day’s sitting.

Gusau however revealed that two members of the committee, Governor Akinwunmi Ambode of Lagos State and former Senate President, Ken Nnamani, were not at the meeting with the vice president.