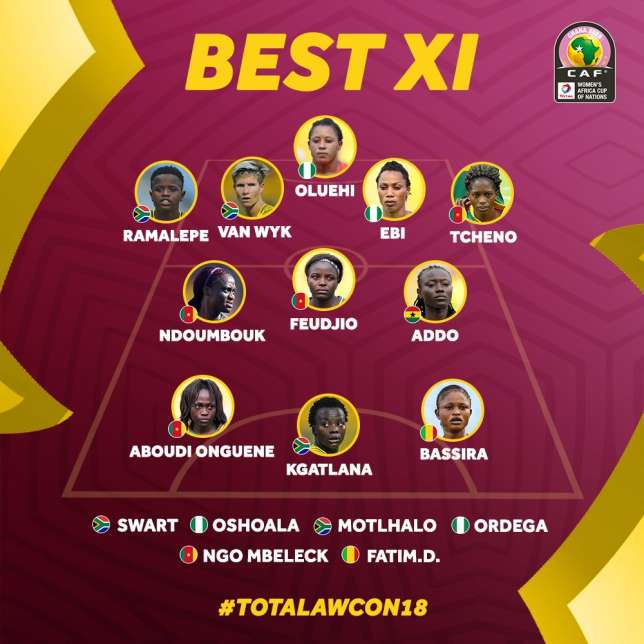 The Super Falcons may have won a ninth AWCON, but African Footballer of the Year Asisat Oshoala faces a tough task retaining her individual title after she and compatriot Francisca Ordega were dropped from the Official CAF 2018 Tournament XI.
Both players had featured in the first round selection, but were only named as subs in the final competition fantasy team.
Falcons heroic goalkeeper Tochukwu Oluehi and defender Onome Ebi retained their places in the main selection.
However, Oparanozie, who was in the first round team, was left out altogether.
The bulky striker, who was the match winner when Nigeria won an eighth AWCON at the expense of hosts Cameroon, was also missing for the Super Falcons in Saturday’s final against South Africa.
Oshoala, Ordega and Oparanozie could face a Herculean task in the race for this year’s CAF Women’s Footballer of the Year after they were named alongside Oluehi and Ebi.
South Africa’s Thembi Kgatlana, who was both 2018 AWCON MVP and top scorer, will now be hot favourite to topple Oshoala as the best African player for the outgoing year.
Best XI Goalkeeper: Tochukwu Oluehi (Nigeria)
Defenders: Lebohang Ramalepe (South Africa), Janine Van Wyk (South Africa), Onome Ebi (Nigeria), Claudine Meffometou Tcheno (Cameroon)
Midfielders: Raissa Feudjio (Cameroon), Marlyse Ngo Ndoumbouk (Cameroon), Elizabeth Addo (Ghana)
Forwards: Gabrielle Aboudi Onguene (Cameroon), Chrestinah Thembi Kgatlana (South Africa), Bassira Toure (Mali)
Substitutes Kaylin Swart (South Africa), Asisat Oshoala (Nigeria), Linda Motlhalo (South Africa), Genevieve Ngo Mbeleck (Cameroon), Francisa Ordega (Nigeria), Fatoumata Diarra (Mali)