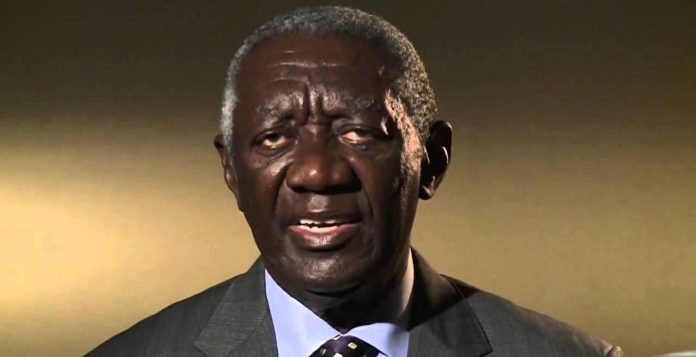 A former president of Ghana, Mr. John Kofi Kuffour, has lamented the act of impunity and non-adherence to the rule of law on the part of leaders in the African continent.

He said that such attitude portends a serious danger to the socio-economic and political stability of the continent.

Kufuor made this disclosure in Ilorin, the Kwara State capital, after he was conferred with an honorary doctoral degree in Public Administration by the Kwara State University, Malete during the special convocation ceremony of the university.

Another personality honoured at the event is a foremost artiste, Alhaji Aminu Jayigbade, who was conferred with a doctoral degree in Literature.

According to Kufuor, “The democratic governance must be able to thrive in the continent. The leaders should emerge without any coercions.

“Leaders in Africa must ensure due process is taken into consideration on who emerges in the political parties’ primaries in order to assist the voters to elect their leaders.

He also said that Africa must be in search of enlightened and creative leaders in all spheres of life and in respective African countries to surmount present challenges and ensure exciting future in the continent.
The former Ghanaian president said that poor governance in the African continent came about through poor leadership and poor allocation of resources.

Kufuor, who called for true servant leadership among future African leaders, said that such leaders must have the grasp of geopolitics around them and resolve to render peaceful and prosperous service to ensure sustainable development in the continent.

“Future leaders in the continent must be made to know that true governance will be brought about with respect for the country and the people, respect for individuals and general humanity, which will make it possible for sustainable development to be achieved, while keeping corruption to the barest minimum. Such leaders do not happen by chance,” he said.

On the 2019 general election in Nigeria, President Kufuor advised that people must accept that democracy has come to stay in the country, saying that government should encourage participation by majority of the people.

“Nigeria is the most populous country in the continent. Whatever you do here reflects on the life and everything else on the African continent.

“So, my prayer is that the people of Nigeria will exercise their rights of choice in accordance with federal constitution to give themselves a sort of leader they desire. When they get such leader, they should ensure checks and balances system of government is respected by government and the media should be watchdog when things go awry. And that should be done according to law. Everything should be as decided or determined by the constitution,” he said.

Kufuor, who lauded the management of the Kwara State University for the honorary doctoral degree bestowed on him, promised to continue to continue with his humanitarian gesture so as to develop the African people.

The Chancellor of the University and former Permanent Representative at United Nations, Prof. Ibrahim Agboola Gambari, said that poor governance, downright impunity, lack of transparency, and inadequate accountability, among others, remain the major challenge facing the country.

“We must as a nation, resolve beyond doubts to engage the attention of these challenge as we go through the campaigns for the 2019 elections.

“Those who benefited from vote buying are worse than those who perpetuate political thuggeries, for they have truly mortgaged the future of our people and ultimately undermine our democratic process.

“It is important to draw attention to the fact that the easiest way to lose power is not to share it. Power sharing therefore necessarily goes with wealth sharing, an attribute of good governance which promotes peace, justice and inclusitivity, a necessary nexus between sustainable peace, development and growth of democracy.”

He called for the support of all Nigerians especially the Independent National Electoral Commission (INEC), security agencies, civil societies and voters for a peaceful and credible elections come 2019.

Gambari said that the honorary award was bestowed on the two awardees in appreciation of their contributions to the social life of the common man in the society.

Also speaking, the Vice-Chancellor of the university, Prof. Abdulrasheed Na’Allah, said that the special convocation was held to show appreciation to the eminent personalities for their support to the development of human race in the country and outside world.

He said that the development was also done in line with the mission and vision of the university.