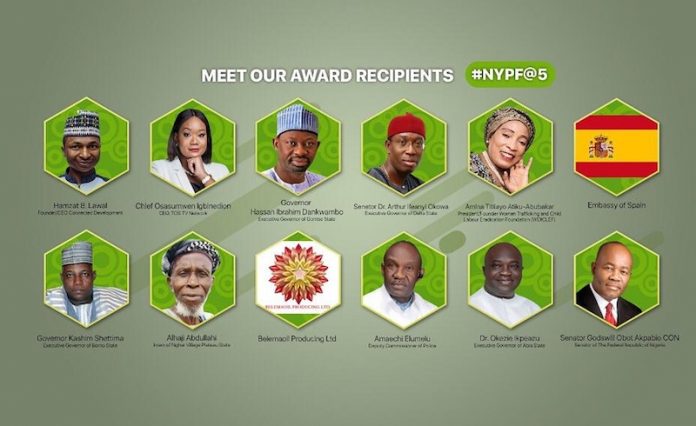 All the award recipients, according to the organisers, were thoroughly considered and shortlisted in recognition of their meritorious service and varied roles, played by each, in support for nation building and advancement of democracy, development and good governance in Nigeria.

The NYPF award, is part of the event to mark the 5th Anniversary Ceremony of the NYPF which is scheduled for December 1 2018 at the Transcorp Hilton Hotel in Abuja.

According to Chairman of the NYPF, Moses Siloko Siasia, “this years’ Anniversary Banquet and Award ceremony is special, and it is dedicated to outstanding Nigerians who deserve to be celebrated”.
He noted that as the NYPF celebrates its 5th year, in the usual tradition of the association, the NYPF has selected individuals who would be presented with awards as special recognition of the selfless services these individuals have rendered to Nigeria.

Speaking further, Moses Siasia said “we considered several individuals for the various categories of the award this year. And, to headline the award we have selected Imam Abdullahi Abubakar, the Imam of Nghar Village in Plateau State. This Imam single-handedly saved over 300 men, women and children when suspected herdsmen invaded some communities in Plateau State. This is the quality of service to nation that NYPF has identified and we are committed to promoting this kind of good deed so that other Nigerians can do the same. If we have more people doing good, then we will be a better country”

The Nigerian Young Professionals Forum, NYPF, is a Non-Governmental Organization of young professionals from different fields of endeavours and committed to three major objectives which are to create sustainable livelihood for young people, engender purposeful leadership and social democratic inclusion and encourage young people’s participation in governance and the economic process. NYPF is deliberately creating a pathway for the future of young Nigerians with over 3 million memberships.

In a 2016 massage at the NYPF Summit in New York, former United Nations Secretary General, Ban Ki Moon said “Nigerian Young Professionals Forum is one of a number of valuable initiatives which share the vision of the United Nations and place young people at the center of sustainability, while encouraging their participation in governance”. This is in attestation to the role of NYPF in promoting the course of national development through engagement in activities that will provide enabling environment for shared and sustainable development, said Siasia.