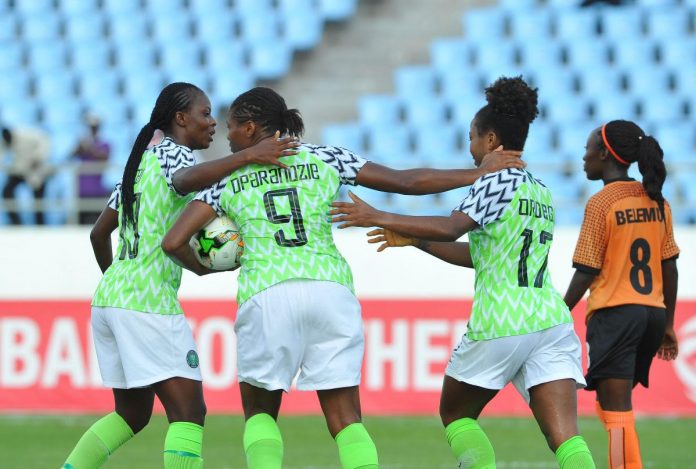 Coach Thomas Dennerby has said he hopes Super Falcons will play their best game of the 2018 AWCON against Cameroon in tomorrow’s semifinal in Accra.

It will be a repeat of the 2016 AWCON final, which the Falcons shaded 1-0 in Yaounde.

Hopefully, we play our best game of the tournament against Cameroon,” Dennerby said after his team dismissed Equatorial Guinea 6-0 to set up another date with the Indomitable Lionesses.

“We already have a plan of the players who will start against Cameroon.”

The experienced Swede coach also said the Falcons will continue to improve as the tournament progresses.

“There are always things we can improve and we try to do that with every single training session,” he said.

We have a good chance to get better and better.

“You can always improve the team, sometimes we had good passing play through midfield, but sometimes we are a bit too slow because we want to use the high fitness level of the team to bring up the pace so as to get the other team tired.”

Meanwhile, African Footballer of the Year Asisat Oshoala has maintained the top target is for the Super Falcons to qualify for next year’s World Cup and personal glory is not as important.

“It is a great feeling to get the full three points for the team (vs Equatorial Guinea), that’s the most important thing,” said the China-based star after she was named Woman of the Match.

This tournament is not about individual performance. The most important thing is to get the World Cup ticket.

“The team victory, the team success is more important.

“I am happy with myself and my team and I think Nigerians are happy, which is the most important here.”

Oshoala added: “I was also happy to get my first goal of the tournament, I started with three goals.

“I took a lot of responsibilities to ensure we get a lot of goals (vs Equatorial Guinea).

“I have been working so hard and I deserved this. I am happy and I am grateful to my team who put in the work even after we lost the first game to South Africa.

“We have to show we are champions, we are the leaders in Africa.

“As a team we have more confidence and have improved and it was a great outing against Equatorial Guinea.”

Against Zambia, Oshoala revealed she was not lucky after she threw away a rash of chances and that was why she opted to provide assists.

“It was not my day and decided to give others passes,” she said.

“At some point I knew I was not going to score because I really do not struggle to score goals like that. So, I helped with an assist.”