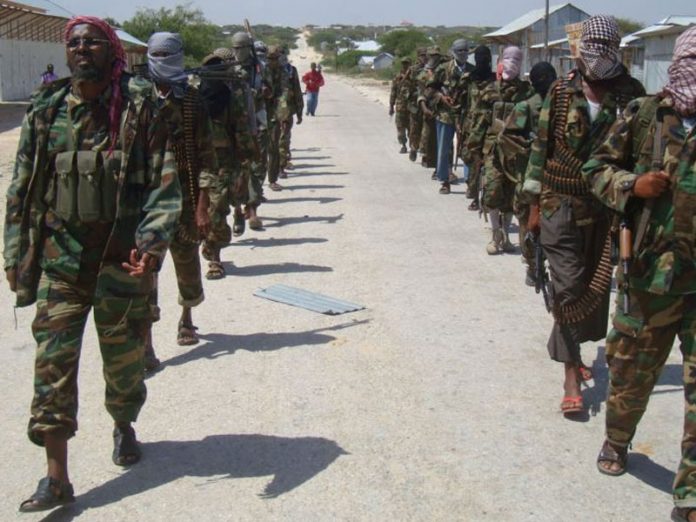 Al Shabaab gunmen and a suicide car bomber struck a religious centre in central Somalia on Monday, killing a cleric and at least 14 of his followers, a police officer said

The Islamist militant group had accused the cleric of insulting Prophet Mohamed, which he denied.

The group was forced from Mogadishu in 2011 and most towns and cities but it retains a strong presence outside the capital and launches frequent bombings and other attacks in a campaign to topple the federal government.

“The (security) operation is now over. Al Shabaab killed 15 people including the cleric, his wife, his followers and his guards,” Captain Nur Mohamed, a police officer, told Reuters from Galkayo by phone.

“Three militants who stormed the centre were also shot dead.”

The group took responsibility for the attack and put the number of dead at 26. It said some soldiers who responded to the first attack also died as they tried to remove a second car bomb.

“We killed 26 people including the owner of the centre, his followers, his bodyguards and soldiers,” Abdiasis Abu Musab, al Shabaab’s military operation spokesman, said.

“The owner of the centre was the man who abused the prophet. The soldiers that died tried to drive a second car bomb that was left by the armed Mujahideen.”

Residents of Galkayo and a regional official said Abdiweli may have also been targeted because his centre hosts mostly youths who play music and dance.

Al Shabaab said last year the cleric had insulted the Prophet, an accusation denied at the time by Abdiweli.

An elder in Galkayo said Abdiweli had provided free boarding to former pirates, street boys and jobless men and they became his followers.

“He used to tell teenagers: “If you were a pirate, or a bandit, stop it and come and dance, eat food and sleep here. God will forgive your sins. Some other ignorant teenagers thought he was as saint … and so joined him,” local elder Ismail Abdirahman told Reuters.

“We understood there was something wrong with him but we could not take him to court because the man was well armed.”

Al Shabaab is fighting to establish its own rule based on its harsh interpretation of Islamic law. The group controls small sections on Mudug region, but it does not include Galkayo.

In a separate attack in Mogadishu on Monday, at least three people died when a car bomb exploded in front of shops in the Wadajir district of the capital, police and witnesses said.

“A parked car laden with explosives exploded in front of shops. So far we know three people died,” Major Mohamed Hussein, a police officer, told Reuters. “Death toll may rise because there are many shops there.”(Reuters)